Trending Stories from The Marquee
You are at:Home»Cover Story»The Jamtronica innovators, Lotus, open up their sound with an album chock full of vocals and more new material on the way
By Marquee Magazine on February 1, 2017 Cover Story, Features, Interviews, Timothy Dwenger 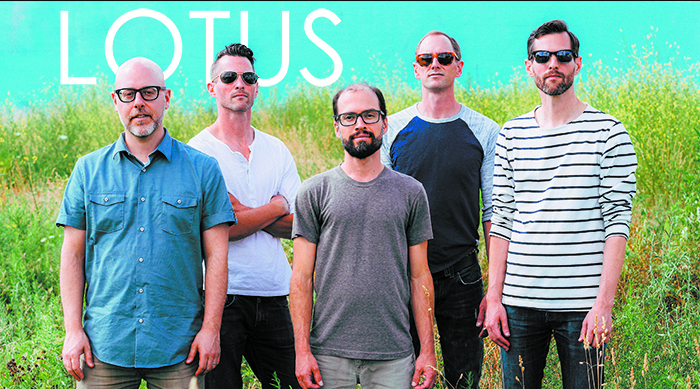 While bands like The Disco Biscuits, The New Deal and STS9 set the stage for the jamtronica revolution in the latter part of the last millenium, Indiana’s Lotus was hot on their heels when they emerged on the scene in 1999.  The band, now based in Denver and Philadelphia, started out as a purely instrumental affair, but over the last 17 years, they have evolved into something much more and a recent step in that development stemmed largely from a pair of shows that happened in Connecticut and Colorado.

“A couple of years ago we did these two Talking Heads deconstructed shows and the energy of a singer was something we wanted to explore further on record.  That’s kind of how we ended up with Eat The Light,” said guitarist and keyboardist Luke Miller referencing the band’s latest full length release during a recent interview with The Marquee, which took place as the band loaded in to the 9:30 Club in D.C. for the first show of their Winter tour.

The album is a departure for Lotus as it is their first record to feature vocals on every track. Over the past several years the band has flirted with vocals by having a singer join them for a song or two, but the foray into a project based entirely around guest vocalists was something completely new for the group.

“Most of the singers on this album were friends and we just tried to think about the vibe of their voice with the songs that we had written. We tried to match them up that way,” Miller said, describing how he and his bandmates decided on who to collaborate with.  “We had an idea in our heads of what we wanted a song to sound like and then we matched that with people we knew.”

The result is a poppy, dance record that conjures images of glitzy, late-night summer parties and it gave Lotus the opportunity to venture into a world in which they didn’t have much experience. “Having tracks with the vocals gave more of an opportunity to do the remix thing,” explained Miller who also has a DJ project called Luke The Knife that focuses on the Nu-Disco realm.  “In the dance world it’s pretty common to have other artists remix your tracks so I wanted to connect with some European producers to hear their takes on our songs. I had Oliver Nelson and Tobtok from Sweden, and TWOGOOD from the UK, and Fare Soldi from Italy, and I’ve got these German guys working on a remix that hasn’t come out yet. I just wanted to get a conversation going with a few people across the pond. So I reached out to them, presented them with a couple of tracks, and pretty much everyone that I got in touch with was really digging what they heard so they wanted the opportunity to put their own spin on them. It was just me emailing people artist-to-artist.”

In December Lotus released five of the resulting remixes — plus one that Miller did himself — on an EP simply titled Eat The Light Remixes and, though the reaction has been positive, Miller wonders what listeners in the more traditional dance music circles are really taking away from the project. “The Oliver Nelson and Tobtok remix of ‘Anti-Gravity’ has about 90,000 plays on Soundcloud, but I don’t know if people that hear it are like, ‘Oh that’s an Oliver Nelson thing’ or ‘it’s a Lotus thing’ or what kind of jumps they are making.”

Regardless of whether the masses are getting turned on to Lotus or not, fans of the band who are also into EDM are sure to be intrigued by the developed takes, which may foreshadow some more Lotus material yet to come. “We are in the demo phase now but we’ve written a bunch of songs for the follow-up to Eat The Light,” Miller explained.  “It’s more psychedelic, funky, with a space disco vibe.”

Miller admitted that vibe probably originated from the band’s Halloween performance in Buffalo where they performed an entire set of space-disco inspired tracks. “That was Jesse’s idea, he’s super into modular synths and that kind of stuff so he wanted to do a set where he could bring out his modular rig and do more with that,” he said. “We wrote some originals and worked up some covers for that one.”

While the group worked in covers ranging from Madonna’s “Like a Prayer” to David Bowie’s “Life On Mars” and even a take on Daft Punk’s “Get Lucky,” they also penned a few originals for the project.  “‘Giffard’s Airship,’ ‘Stellar Triangulation,’ and ‘Sextant’ were all original songs that we wrote for that show,” Miller revealed. “We are working on those for live performances and the new studio album so we are starting to sprinkle some of those in to our live sets.”

The live sets have always been the pinnacle of the Lotus experience, but with the horizons expanding for Miller and his bandmates, there is no doubt that fans, new and old, are in for a treat this winter as the band plays shows from coast-to-coast. “If we can’t bring a singer out to the show, we have the vocals sampled,” said Miller describing how they are showcasing the material from Eat The Light.  That said, he made it clear that they have something special in store. “For certain gigs we are shelving the samples and having guest singers come in and I’d say there is a high possibility of that for the Denver show.”