Trending Stories from The Marquee
You are at:Home»Cover Story»Savoy
By Marquee Magazine on February 1, 2017 Cover Story, Features, Interviews, Michael Chary 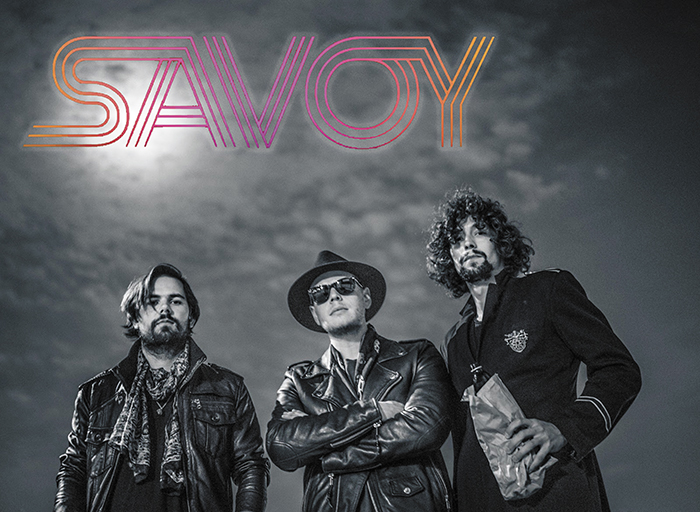 For those acquainted with Savoy, the electronic rock trio’s name is essentially synonymous with the phrase sensory overload. Sonically, they have employed arena rock elements with modern EDM, underscored by an appreciation for early ‘80’s disco. Visually, they have employed copious amounts of lights and lasers in their live performances — so much so, that one segment of the Savoy website is simply titled, “Lasers.”

While this synesthetic combination has worked well for them in the past and established the former Boulder-ites as one of the more high-intensity live acts in their genre, their latest EP, Tomorrow Today Pt. 1, is a step in a decidedly different direction.

“If you make another banger it’s going to have a great reaction and it’s going to be great in that moment and that’s really important, but we found that we weren’t listening to that music at home, we weren’t listening to that music anywhere else other than the live performance,” said Ben Eberdt of Savoy during a recent interview with The Marquee. “For this EP we were going to make the music that we genuinely love and that’s the only goal and requirement. So we started thinking about our influences, who we listen to and what gives us the most joy when we’re hanging out at home, at a party with our friends, or even when we’re DJing. What is it that we keep coming back to that gives us a lasting emotional pleasure? None of those artists were in the dance world and that’s not the music we listen to at home, we don’t want to listen to raging bangers when we’re trying to chill.”

Eberdt was quick to point out that this new goal doesn’t mean that Savoy’s live shows will be any less lively. They will, in fact, remix and hype up their new tracks to sync to the pace of the Savoy live set, but the goal is for the tracks to have a more down-tempo sensibility with lasting resonance.

“I’m sure a lot of fans are going to hate on us, but what people have to realize is that we’re doing what makes us happy. We’ve been doing this for ten years and you can’t expect someone to be the same. I dare anyone to look at themselves ten years ago and say that they’re the same person. It’s just the natural progression of what happens and we happen to really love what we’re doing now more than anything we’ve ever done,” Eberdt said.

Before relocating to Williamsburg, Brooklyn about six years ago, Savoy started simply as a rock trio at CU Boulder with no incorporation of electronic elements. In what Eberdt described as a need to fill out their sound, the group started to implement synthesizers and drum machines. The trio also attempted to audition keyboard players, however none were able to comprehend what they were trying to do, so they turned to the digital production tool, Ableton Live. According to Eberdt, there were only a few people in Boulder to turn to who were Ableton adept. One was Derek Vincent Smith, a.k.a. Pretty Lights, and the other, Marcelo Moxy. Despite their initial foray into the electronic scene being labeled “Euro-trash” by some, Savoy’s vision proved prescient.

Savoy seemingly got in at the right time and has had significant success in their realm. However, as the genre has inevitably changed and evolved, so has Savoy. Eberdt touts modern artists like Kevin Parker of Tame Impala as a musician he looks up to when it comes to production and redeveloping one’s sound. In the way that Parker pushed toward EDM on Tame Impala’s last record, Savoy is conversely scaling back, in a sense, to the groove of their rock and disco roots.

“When you listen to us at home now you may be able to reach a little bit deeper into who we really are,” Eberdt said. “I’ve been a musician my whole life and I have to make music that I genuinely love. If I’m not doing that I’d rather not do music and that’s a mature decision that we’ve come to together. Why are we really doing this? Is it to make kids go crazy at concerts or is it to make something beautiful that lasts? I’d rather die trying to do that than to just make whatever’s hot at the moment and makes a buck.”

With that same sentiment, Eberdt mentioned that the band has been cautious when collaborating with other artists. His experience has taught him that often guest collaborators might be trying to make a quick pop hit song, but that mindset often leads to something sounding contrived. With that in mind the band felt an immediate affinity with what they heard from Aussie artist, Porsches, for the track “Neon Nebraska.” Other guest appearances seen on the new EP include artists such as Fatherdude, Jojee, and Grammy-nominated Bright Lights.

To roll out their forthcoming EP, Savoy will start a month-long US tour beginning in February. Seasoned fans should fear not, for there will be lasers and visual stimuli, though the band wants the crowd to be able to see more of what they’re doing. “Right now what we’re really trying to do is focus on the lasers being a part as they always were, but also trying to focus on the instrumentation that is going on,” Eberdt said. “We’re continually expanding what we’re doing live as far as the guitars, bass and drums, but a lot of times in the past there have been large portions of the show where it’s completely dark on stage – and the lasers are going which is cool — but we want to set up a little bit more of a rock atmosphere in the venue, because we’re doing a lot of shit up there that we want people to see. We’re not just up there DJing. We’re actually performing.” [No offense to DJs, he prefaced.]