Vermont’s ‘other jam band’ cuts their own path and gets set to release Plump: Chapter 2 with help of legendary producer Ron Saint Germain 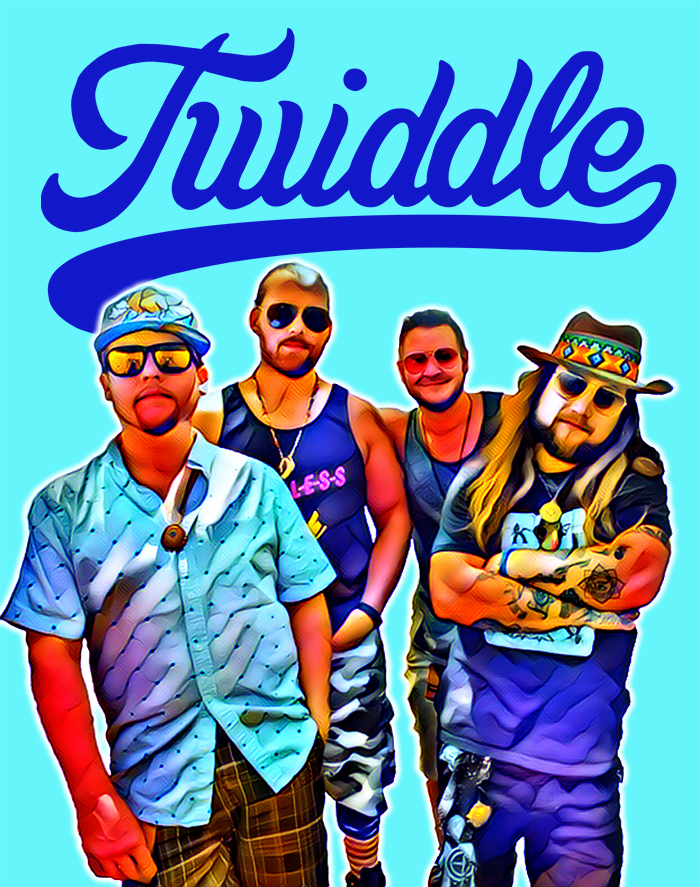 When most people are asked to name a jam band from Vermont there is usually only one name that jumps to mind. But lately, there’s another group that’s getting more and more notice. Though they share a similar back story having met in college and played countless gigs around Burlington, Twiddle is decidedly their own band and they are riding no one’s coattails. They blend genres effortlessly as they move from organic rock and roll reminiscent of the ground-breaking scene of the ‘90s, to reggae beats and rapid fire lyrics that call to mind Matisyahu or Slightly Stoopid. They broadcast a positive message and rain good vibes whenever they play.

When The Marquee caught up with lead singer and guitarist Mihali Savoulidis, he was about to board the boat for his second Jam Cruise but, despite the excitement surrounding that experience, there was a dark cloud in the air as it was also inauguration day. Hailing from Bernie Sanders’ home state, Savoulidis had some thoughts to share on the era that was about to begin.  “I notice in my generation — my peers and my family, even — everyone is kind of, I don’t know if ‘scared’ is the right word, but everyone is really uneasy about it all. None of us really know what the heck is going to happen,” he said. “I — usually being an optimist — am hoping for the good of people to shine over the major ignorance that is taking place around the country.  I’m trying to put a little more faith in humanity.  This is a time for us to be good to each other and to not look the other way when we see something that is wrong or that we disagree with morally.  Maybe do something about it, speak up, use your voice. Now, more than ever, is the time to do that and to show that there is a ton of love left here in the United States.”

Just a few months after Jam Cruise has returned to port, and while the country assesses Trump’s first 100 days in office, Twiddle will be unleashing the second chapter of their ambitious album Plump. “We are just finishing up the second disc of that two disc project,” Savoulidis revealed. “It will be called Plump: Chapter 2. We are looking to release it this spring and the music on it is really great. I think the fans are going to love it. We have worked super hard on it the last year; really taking our time with it.”

While the madness of the pending election of 2016 swirled around them, the band diligently worked on the album and still found time to play nearly 100 shows. This time, however, they chose not to road test many of the songs they were putting to tape. “We have only played two of the songs live out of the 16 that are on the album. We have really been holding them back and we’ve never done that before,” said Savoulidis. “Our fans were really expecting new material off of this whole two-part album thing we were doing and the first album had a lot of the stuff that we had been playing live for a while and I think that some of them were a little disappointed, so we decided to just go for it this time and really surprise them with the record when it comes out. That was the goal from the beginning.”

Another surprise will be that the band wrote a majority of the songs on the upcoming album as a team and, predictably, that yielded some different results. “In the past it’s been a lot of someone writes a song and brings it to the table and we learn it and it usually goes live for a little bit and then it might end up on a studio album. But, for this project, we all wrote together. It’s sort of a new thing for us,” Savoulidis admitted. “Each one of us has our own set of influences in the kind of music that we dig and like to write, and that comes out in the songs.  It’s very cool. You can kinda hear the personalities coming out through the parts of each of these songs. This next album is definitely an eclectic blend of stuff.  There is all kinds of music on it and there is not one defining genre at all.”

While Twiddle’s previous work has flirted with reggae, psychedelic, blues, and certainly contains a large dose of rock and roll, there would be few listeners who could have ever put them firmly in any one genre. That breadth of diversity is probably at least one of the reasons that SoNo Music Group’s CEO Claude Villani suggested they team with legendary producer Ron Saint Germain for a few songs that will be released on Plump: Chapter 2.  “If you look him up he’s worked with everyone from 311 to Tool, to Jimi Hendrix, to Michael Jackson,” Savoulidis said excitedly.  “The guy is amazing.  He’s been working on a couple of the tunes on the album and I think they are gonna be really great. We are really looking forward to it.”

This was Twiddle’s first experience working with a producer and while it was new, it seems to be yielding some great results. “This is really the first time that we’ve gotten to work with someone who has a lot of experience,” Savoulidis admitted.  “It’s a whirlwind of learning and we are excited to see where it will go in the future.”

This kind of excitement is interesting as many jam bands in the scene seem to have a love/hate, or maybe just hate, relationship with the studio. Their natural environment is on stage, in front of rabid crowds that push the energy and dare them to take risks that sometimes yield amazing results.  “The studio can be very frustrating.  The first disc of the album that we did, Plump: Chapter 1, was kind of a difficult one to get through,” Savoulidis admitted. “I think it all depends on the band’s mentality going into the studio, but honestly, I love it. When it starts to be fun it’s really fun. I don’t really look at the studio as a place where we try to recreate what we do in the live setting. I think it’s more for trying to create a piece of art that is its own thing and stands alone; something that can be enjoyed for the sake of just an album. To try and bring some of these songs to life in a different way as opposed to the way we do it live.”