Members of Elephant Revival, Taarka and Intuit join with a theatrical circus production inspired by environmental awareness and substantiality 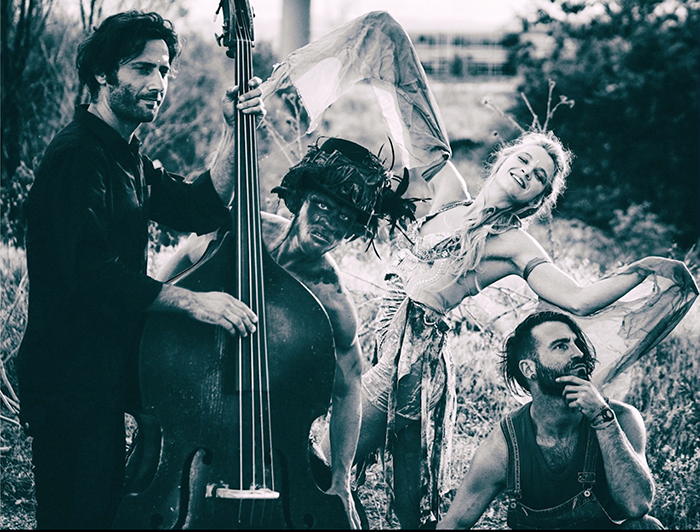 On last year’s Elephant Revival release Petals, bassist and band co-founder Dango Rose unveiled a song that he had worked on for over two years. “When I Fall” buried Rose under at one time almost 10 different verse options and he spent years whittling away at the material to reduce it to it’s core meaning in only two verses, and two and a half minutes.

Songwriting challenges like that however appear to be more than part of the fun for Rose, who for his most recent endeavor is trying something equally difficult, but from another angle entirely.

For the last five or so years, Elephant Revival has worked on and off with a group of aerial performers and movement artists known as the Fractal Tribe, who have mostly joined the band at their Colorado shows, but have ventured out a bit on the road with the group as well. A little more than a year ago they did a New Year’s Eve run to the Midwest and a trek down to the Envision Festival in Costa Rica together.

“It was during that time together that we started talking about what this show could look like — something that combines the Boulder County circus community with the local music community to create it’s own show. It’s a collaborative piece from different, pre-existing artistic communities and tribes,” Rose said during a recent interview with The Marquee.

The result is Eco-Wakening, a Cirque Du Soleil-like production that combines music, dance, circus artists, and parkour athletes and brings awareness to the way the lifestyle choices of a society effect the environment. One piece of the program — which is being produced and directed by internationally acclaimed aerialist and choreographer Ariana Papousek — focuses on over-production in the industrial sector, fueled by an ever-increasing need for consumption that has lead to the destruction of pristine places in the world. While another piece that Rose helped to compose, “Singularity,” serves as the backdrop to a scene that harkens to modern distractions, especially with regard to the speed of ever-increasing technologies. It leans to the notion of how human focus often strays from the scenery of life to the “screens of life.”

Rose explained that writing the material and synching it with the performances was a challenging undertaking. “It’s interesting because one of the pieces is modern dance specific, so the arrangement has been created pretty much in correlation with the main choreographer for this dance scene. It’s happening in the room together. The piece in particular is being spearheaded by Neil Sullivan of Intuit. He and the choreographer Margaret Hilton have been working on it together. He plays through the movements and it’s atmospheric and kind of sound-scapey and they’re creating a dance. Then he brings it to the band, which is really cool because then the dancer is part of the musical composition. The musicians are watching the dancers, while Neil is playing and then what he sees working he captures. It’s a really cool process and in essence they’re all really dancing together.”

In advance of the performance Rose, his Elephant Revival bandmate Bonnie Paine and Taarka’s Enion Pelta-Tiller created a short film called “Metanoia” that will be rolled out as part of the promotional piece of the show.  While Paine plays in the video during the upcoming live performances cello duty will be handled by Intuit’s Chloe B. Watkins. “This video turned into a short art film and it’s really based around the different elements of, I guess you could say, of the human ego. There’s a monster character, a fairy/nature character and a human. Each has its own character motif and is represented in the three main characters. So, Bonnie created her own character motif for the human, and every time the human appears in the film, you’d see Bonnie playing cello. The bass represented the monster and the violin represented the fairy,” Rose said before explaining what it taught him about film scores. “It’s difficult. It’s given me a whole new dimensional understanding of film scoring and what that process is like and how it just becomes a totally focused and time consuming career. But then with Eco-Wakening there’s the whole live theatre production element of it too. That’s a whole other thing because you’re not just thinking about the music, you’re thinking about all of the different elements and you’re supporting something else too. The music is becoming a supportive art form for the movement artists. It’s been a great learning process.”