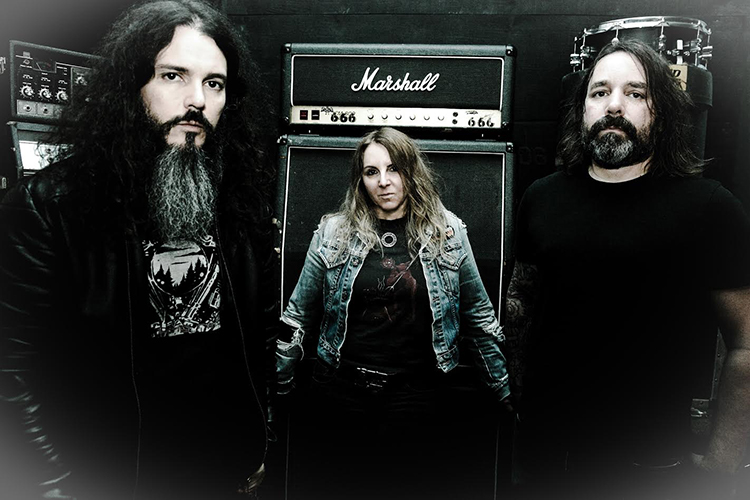 Acid King’s Lori S. has no need to keep it a secret. She easily revealed the ingredients of Acid King’s enduring, 20-year long sound. Just because the recipe is public doesn’t mean it can be easily duplicated. “The secret sauce is a vintage Little Big Muff that I have, my Les Paul and my Marshall stack. But you know you’ve got to have my hands to make it sound that way,” she laughed, during a recent interview with The Marquee.

Way beyond just her hands though, is Lori’s matriarchal Acid King mindset, and a double-decade dedication to the psychedelic doom, stoner metal trio from San Francisco that has not only survived, but infected modern luminaries, and earned the band a place in “The Encyclopedia of Heavy Metal” and the “A to Z of Doom, Gothic & Stoner Metal,” not to mention countless tours around the world.

Acid King is the epitome of the slow reveal, the grind, the sludge — the slow and steady turtle that always seems to prevail above the quick-to-burn-out hare. Started in 1993 — and named after the savage, drugged-out suburban killer Ricky Kasso, who was portrayed in the book “Say You Love Satan” a “heavily fictionalized” account of the savage events of June 1984 — Acid King put forth three full-length albums and three EPs, between their formation and 2005. But soon after their 2005 full-length, aptly titled III, the group took an extended break from the studio. The band wasn’t on any sort of hiatus, in fact, as social media began to come into existence and then proliferate, Acid King was receiving offers for tours through Europe, Australia and Japan, but as the trio became more and more focused on playing overseas, studio work was cast aside. Before anyone knew it nearly 10 years had gone by. Then in 2015 Acid King announced the release of their latest effort Middle of Nowhere, Center of Everywhere, an eight-track doom masterpiece that received widespread critical acclaim with outlets like Noisey, Blabbermouth, Ultimate Guitar and Invisible Oranges, among others singing its praises. The album takes Lori’s secret sauce and incorporates it into a dazzling feast for the senses. As she has eluded to time and time again throughout their career, much of Acid King’s sound comes from her motorcycle moments. Specifically though, she explained the sound is more refined than a simple motorcycle ride — it’s fucking vintage. “I have a Triumph Trophy 500. It’s a 1971,” she revealed. “I’ve had it for 20 years and it’s just a kick-starting old-school bike, and for me it’s urban riding, or going to the beach, or whatever.”

That bike though, like her band, is a testament to resilience. Parts have been swapped out and replaced over the years on both machine and group — like in 2016, when shortly after the release and ensuing tour of Middle of Nowhere, Center of Everywhere, drummer Joey Osbourne and bassist Mark Lamb, both departed the trio. “I knew after we were done writing the record that they didn’t want to commit to anything after that,” she explained. “They were kind of done. You know Joey was in the band the entire time — 20 years — and Mark had been in the band for 10 years. It’s just a hard thing for people to do something forever. They had both traveled the world many times and they were just done.”

Lucky for Lori however, finding replacements was easier than finding parts for her Triumph. Her old friend Rafa Martinez of Black Cobra, who had been the bass player in Acid King from 2005 to 2008, entered into the fold again, and Lori was fortunate enough to discover Bil Bowman of Hornss to fill the vacancy on drums. “I’m very lucky. The recruiting process was very easy and short. I got so lucky in that area. I’m super happy,” she said of the re-solidified trio.

For both bike and band keeping the machine greased and moving is part of the longevity, and Lori is simply amazed at the changes that have come along that have allowed Acid King to remain relevant and even grow far beyond what she had originally envisioned at the band’s inception. “When we started your band was known to local people, your local college radio station (before they all went away) and whatever towns you toured in,” she said. “It was a very small amount of people. And then, suddenly, it went from a small amount of people to unlimited — worldwide — and it totally changed.” Myspace seems like a laughable old dinosaur today, but Acid King’s inception pre-dated the seminal social media giant by a full decade, and Lori is grateful of the changes that kept putting Acid King’s name in front of people even when they didn’t have new material to share. “You know we go into iTunes now and see, well, if you like Sleep then you’ll like us. That didn’t exist in 1993. We were still passing cassettes to each other. Video games have been huge too. The Sword was on a video game and all of a sudden they got popular and through them people found Sleep and then us. We were never that kind of band that we were on a major label and never had that pressure to bust out a new record. I/We/Me just kind of floated along and did whatever happened. Granted 10 years is probably a little bit long to go for a new record, but we were never put together with the idea that we were going to ‘make it’ somewhere or that we were even going to make a living off of this. Things just happened organically.”