Trending Stories from The Marquee
You are at:Home»Cover Story»Circles Around The Sun
By Marquee Magazine on June 1, 2017 Cover Story, Features, Interviews, Timothy Dwenger 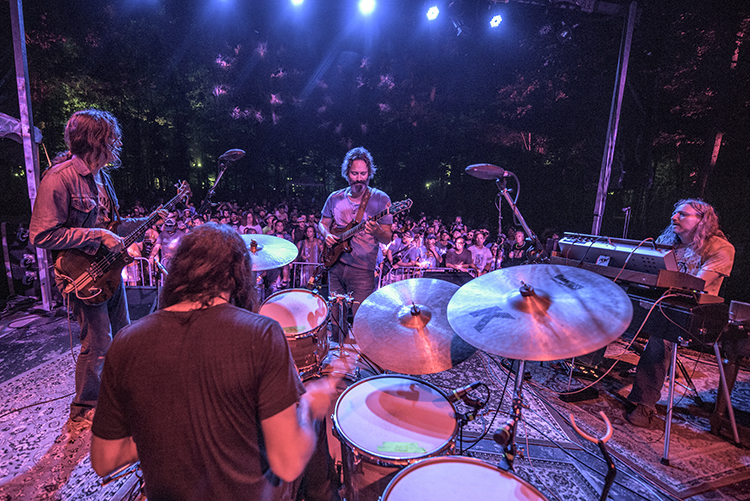 2015 was a monumental year for the community of The Grateful Dead as the surviving members of the band came back together for “one last time” to commemorate the band’s 50th anniversary with a series of performances in Santa Clara, Calif., and Chicago, Ill., that were dubbed “Fare Thee Well.”  In addition to ten sets of music from the legendary patriarchs of the jamband movement, the shows featured nearly five hours of brand new music from a group of musicians now known as Circles Around The Sun.

The music, which was played over the P.A. before the show and during setbreak each night, was commissioned by Justin Kreutzmann (son of Grateful Dead drummer Bill Kreutzmann) during a conversation with guitarist Neal Casal (Chris Robinson Brotherhood, Hardworking Americans, Ryan Adams & The Cardinals).  While Casal had worked with Kreutzmann on several Grateful Dead related projects, including scoring The Other One the biography of Bob Weir which was released in 2016, he admitted that the request that spawned Circles Around The Sun was daunting.  “What he said to me was that over the course of the five shows he would love to have music that wouldn’t ever repeat and that’s when I did the math and came up with the number of five hours,” Casal said with a laugh during a recent conversation with The Marquee. “That was an incredibly ambitious, nearly impossible number to hit but, being the adventurous sort that we are, we decided to give it a try.”

Led by Casal, the spacey quartet was flushed out by Adam MacDougall (The Black Crowes, Chris Robinson Brotherhood) on keys, Dan Horne (Beachwood Sparks, Jonathan Wilson) on bass, and Colorado near-native Mark Levy (The Congress) on drums.  “There was no foundation between the four of us – none – it was my ideas and Adam’s ideas combined,” Casal admitted.  “I got Dan into the picture because I knew that he did a Dead thing on bass, in the way that I like to do a Dead thing on guitar, which is not to imitate but to bring the essence forward. Adam brought Mark into the fold because Adam and Mark had been wanting to do something for a really long time and Adam said ‘I think this guy is going to be great for this.’ If Adam has a strong feeling about something I trust the guy so much that of course I approve.”

The trust that saturated this group yielded almost immediate results in the studio though Casal conceded that without the massive canvas to fill, the music might not have developed in the same way. “That’s what forced the pieces of music to be so incredibly long, and that’s also what forced a certain beautiful patience from us as musicians,” he revealed.  “Had we been asked for a half hour of music, the music would never have been as long, languid, and interesting as it is. We were forced into this position of playing in a way we never had before and, through that, things were revealed to us. We were forced into a certain patience that kind of runs counter to the way a lot of things in the world run these days.”

In almost direct contrast to the ethereal and slow-burning music that the group created, the studio sessions were a veritable whirlwind.  “It was all done in two days. There were zero overdubs – nothing – it was all done live. We never changed anything. There was rarely a second take as a matter of fact. It would be hard to do multiple takes on a 25 minute piece of music that was not prepared beforehand and I did not have one riff that I brought in to the studio. We started from scratch.  All we would do was talk over the key, a set of chord changes and then we would go. They were truly improvisations,” Casal said before sharing that there was some minimal guidance from Kruetzmann. “Sometimes Justin would say something like ‘give me something the vein of ‘Althea’-ish.’ Imitation is not my bag. It’s not something I’m interested in. I won’t do it. I refuse because I think pure imitation is bad for the world. I really think that. Now, showing our influences is a different story. Can you hear the Grateful Dead influence in my guitar playing?  Absolutely, I’m the first one to admit that. Do I imitate either of the Grateful Dead guitar players? Absolutely not. Can you hear the Grateful Dead influence in Circles Around The Sun? Absolutely, it was designed to be that way. But are we imitating the Grateful Dead? Absolutely not. I don’t think anyone could say that. We were asked to call forth a certain essence of the Dead – maybe the way they would make you feel in your soul – and that’s because it had to connect with Dead fans who were at those shows.”

Now, almost two years later, Casal is still reeling from the reaction to the music that Circles Around The Sun created. “It was just an incredible, serendipitous, miraculous, joyful occurrence. We made this music for those shows and didn’t really expect anyone to even really pay attention to it, let alone react so positively to it the way they have,” he said. “The music was not recorded with the intent of being released. It was just made strictly for those live gigs. So the fact that it turned into a record was amazing, and the fact that there has been some demand for us to play it live has been amazing as well. Sometimes the best things in life are the ones that you don’t plan for and this is a great example of that.”

In addition to the outstanding reception from the fans and the press, there is at least one of the core four of the Grateful Dead who was wowed by what Casal and his quartet produced. “I had a really amazing moment with Phil over this music,” Casal said excitedly. “Last summer I had a number of gigs at his Terrapin Station in the Bay Area and it just so happened that Adam and Mark and I had a bar show coming up and we were going to have one of the local bass players up there play with us. Then Phil got a hold of me and said ‘Neal, would you mind if I played bass with you that night?’ He actually asked my permission and I said ‘We would be delighted to have you play bass with us.’ Then he said to me, ‘Would it be okay if we did some of that Circles Around The Sun music’ and honestly that was one of the biggest compliments I have ever gotten in my life.”

On the heels of that kind of compliment from a founding member of the band that inspired this music, it’s no wonder that Casal has brought the band back together for a couple of live shows over the last year.  While there have only been a couple Circles Around The Sun gigs so far, Casal seemed excited about the future of the band. “We’ve only played four live shows, so we are really just getting this thing off the ground but it’s really exciting to be able to come and do four shows in a row in Colorado. We will be able to really dig in. We are going to be able to get dirty,” he said before giving a hint at what’s to come. “We want to expand right away. We want to get into new things. We want to start writing. I want to make another record. I would like this to have a life. There is every reason to continue this at this point. It can’t hurt to try. There is every reason to play shows when we can. There is every reason to try to make another record. There is every reason to take it as far as we can. Then, if a different idea comes up and everyone wants to do something else, then fine, but I think there’s more life in it and that’s what we are going for.”