Trending Stories from The Marquee
You are at:Home»Cover Story»TajMo
By Marquee Magazine on June 1, 2017 Cover Story, Features, Interviews, Timothy Dwenger 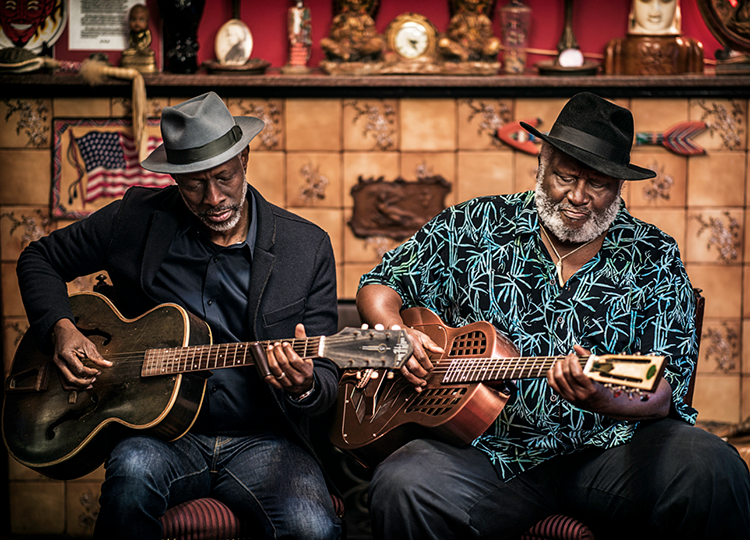 Blues music has seen many-a-legend rise from its murky depths over the years. From the likes of Robert Johnson, Blind Lemon Jefferson, and Lead Belly who pioneered the art form, to Muddy Waters, B.B. King, and John Lee Hooker, who brought it into the modern era, blues is thriving to this day. And thanks to modern legends like Eric Clapton, Bonnie Raitt and a pair of musicians who just jointly released their first album together, Taj Mahal and Kevin Moore (aka Keb’ Mo’) it’s a legacy that is bound to continue.

While Clapton, Raitt and Mahal were all international stars by the time Moore’s major label debut Keb’ Mo’ hit in 1994 he had been active in the music world since the early ’70s when he started writing and recording with Jefferson Airplane violinist Papa John Creach. Moore earned himself a gold record, and even had a song he co-wrote top the charts, but a satisfying solo career stayed just out of reach until a serendipitous meeting with Taj Mahal in 1993 set things in motion.

“Back in ’93 a friend of mine, Chic Street Man, wanted me to meet Taj, so we went to Studio 55 in L.A. where he was working on this record called Dancing The Blues,” Moore said during a recent interview with The Marquee from his home in Tennessee. “John Porter was the producer and I went and just sat there as a fly on the wall to watch them work. I had really given up on the idea of having a contract with a major record company so I was pretty much just recording my own tapes to sell at my gigs and one of those ended up being my demo tape for Taj and John Porter. John Porter took a copy and shopped it around and got me a deal with Okeh Records.”

The rest, as they say, is history. Moore is now thirteen studio albums deep into a storied career but he remains pleasantly humble. “I thought it would be over by now,” he admitted. “I thought maybe I’d get a five year run. You know, you get what you get. I never made it really big, just big enough to fill small theaters — no arenas, no stadiums, but I have a job. I get to make music. I get to make records. I get to write songs and people hear them. It’s amazing.”

There’s no doubt that Moore’s story is amazing and a fascinating chapter was made public earlier this year when it was announced that things would come full circle for him with the release of TajMo. Though the pair had been friendly over the years, they had never really worked together until Taj broached the subject during a chance meeting at a hotel bar. “It was January of 2014 and we were both at a tribute to Gregg Allman at the Fox Theater Atlanta. I went into the hotel bar and Taj was there and I started talking to him,” Moore recalled. “As we were talking he said ‘Hey man, we outta do something together’ and he kinda sounded serious and my mind was like ‘wah, wah, wah, wah’ and somehow I said ‘Okay, yeah.’ It sounded serious, it sounded like ‘Let’s do this! Let’s really do this!’ So when I got home I called him up and said ‘Okay, let’s set a date.’ The date was later on in the year when we both had time, but we set the date and set the time and we got started. I think it was October of 2014 and we recorded one tune and started two more. Over the next year and a half we were fishing around, writing, looking for songs and doing things, then low and behold we came up with the record that you have in your hand.”

Moore went on to describe the process during that intervening year and a half as sort of like putting together a collage. “We wrote two songs together for this project. ‘Don’t Leave Me Here’ and ‘Soul’ and they went very smoothly,” he said. “I also wrote a couple with John Lewis Parker, but the others were songs that he found, or songs that I found. There are some old things on there, some pre-war blues that we like to hear. It’s a mish-mash of sounds that we had sitting around and it all came together.”

Part of what adds to that mishmash of sounds is a bevy of special guests ranging from Sheila E. to Joe Walsh to Bonnie Raitt who are tastefully sprinkled through the album. “We didn’t want the record to be about guests,” Moore said. “We wanted it to have an organic flow to it. We didn’t want it to have that vanity, that ‘look who my friends are’ crap, so everyone was pretty much a walk-in type situation. We were up in Berkeley recording and Bonnie was rehearsing so she dropped by to hear what we were doing and so that’s how she came on it. Then, a while later, Joe Walsh was in town, called and said ‘Hey, what you guys doing, man? I wanna come see what you guys are doing man.’ So he came by and pulled in the driveway and had his guitar and amp with him so he was ready to play. He brought it in. He didn’t even ask if we wanted him to play, he just brought it in. I think the guests really helped. I know we could have pulled it off without them but man, is it great with them.”

While Moore and Mahal won’t be hitting the road this summer with an army of special guests in tow, they have put together a big band that will enable them to showcase all kinds of music as they mount a major tour in support of this album. “We’ll be playing some of his stuff, some of my stuff, and a lot of the record tastefully blended together,” Moore revealed. “We have a great band. Seven in the band, plus Taj and I make nine. We’ll have tenor sax and trumpet and background singers and a great rhythm section. It’s a pretty big undertaking. We are going for it.”