Trending Stories from The Marquee
You are at:Home»Cover Story»Lane 8
By Marquee Magazine on July 1, 2017 Cover Story, Features, Interviews, Michael Chary 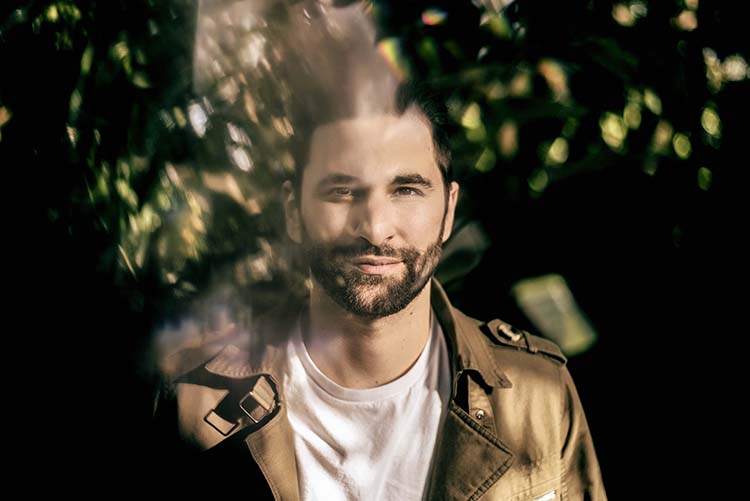 The electronic music scene is inherently ostentatious. DJs are looked upon as templed kings on their thrones, commanding the ebb and flow of fans who are often recording the spectacle and documenting it to gain arbitrary points for having been there. The whole scene is guilty of it — pulling out the phone for a quick snap or video to remember the moment and maybe show the internet how much fun was had. It’s almost as if certain elements of electronic music were designed for this phenomenon, the build up acting as a warning for audiences to pull out their phones and prepare to capture that epic drop. But amid the selfies, snapchats and live feeds, Denver’s Lane 8 has decided to act more like Moses and part the (blue) sea of glowing phone screens to create a truly spiritual experience.

This Never Happened is the name of the concept for the live sets curated by Daniel Goldstein, better known as Lane 8, in which cell phone pictures and recordings are strongly discouraged. This philosophy is starting to become increasingly common for live entertainment, although it is not often seen in the electronic music world. Despite the logistical nightmare of enforcing such a policy, Goldstein’s fanbase has been very receptive to the idea.

“When we first started doing these shows we were really anxious like, is it gonna work or is it gonna be a complete failure?” Goldstein told The Marquee in a recent interview. “But all of the venues that we’ve used have been really great about putting their whole force behind the concept and what we found pretty much right from the get-go was that people were really excited to try this whole concept out.”

In a music culture where, more often than not, the performer is by themselves in front of an audience of many, developing a connection and being able to read fans is paramount. Goldstein seems to have mastered this dynamic, developing that ineffable connection between musician and listener. This relationship is evident not just in live sets, but in the digital realm as well. Over the course of his come-up, Goldstein has seen success across the range of methods for music delivery available to an electronic producer — albums, EPs, remixes, singles and most notably longer mixes.

While it’s ironic that finding success in a mixed DJ set seems uncommon these days, making a name for one’s self in the multitude of producers requires standout, original music. While Lane 8 has certainly accomplished this, the insight into his musical taste and personal touch that is heard on his mixes have helped bring his name to the forefront of his genre.

“It’s interesting how much people really like those (mixes), for me, it’s really fun because I love just digging for music and it gives me a chance to get behind a lot of stuff that I really love that might not receive that much spotlight otherwise,” Goldstein said. “I’m sometimes surprised that people like them so much, but it’s great and I appreciate the opportunity to present my musical taste and have them respond positively. It’s at the core of what a DJ strives to do and to do that in an online format is pretty cool — it’s a natural extension of what I do.” But with the multitude of music within the electronic genre and its seemingly infinite sub-genres, the feedback is not always positive. Goldstein, who is originally a San Francisco native, spent several years living in Leipzig, Germany and has experienced the intensely particular and fickle European electronic music scene. He said that there are so many different pocketed scenes within each country and region in Europe that it is hard to find mass appeal, with many areas having niche tastes. But the reception in the U.S. he says is a different story.

“Pretty much everywhere I go in the states my music seems to be received pretty well, but in Europe, it’s pretty mixed. It either goes great, or it’s like, ‘What am I doing here? These people hate me,’” Goldstein said. “I think Europe’s really tough. There probably aren’t many artists you would talk to that would say it’s easy to crack Europe and I think anybody who’s toured both would come to the same conclusion. In America, you’ll have your techno purists all over for sure, but here they’re more willing to go check out an Odesza show as well as seeing Ben Klock, so I think people are more open to different styles here.”

Goldstein, like many artists, does not concern himself with labeling his music under one genre or another but has found a comfortable residence between a multitude of popular styles, despite what those techno-purist naysayers might think. Goldstein is signed under Above&Beyond’s AnjunaDeep label, arguably one of the biggest deep house imprints in European electronic music. Meanwhile, he has released massive remixes for Odesza and Rüfus du Sol, dipping his hands into the electropop, future bass sound that is pervasive in the U.S. these days, all without losing his signature downtempo feel congruent with the style coming from labels like Ghostly International. And he’s excited to show audiences how far he’s come.

“I’m playing a lot of my own music in my sets these days, but that wasn’t always the case,” Goldstein said. “When I was first starting to play out a bit more, I don’t think I had the confidence in my music to play it a lot. But now I look at it as an opportunity — I look at a crowd as composed of a handful of people who came to see me, a handful who have heard maybe one or two of my tracks, and a handful who might not have any idea who I am. So I look at that as a chance to present my music and for the people who don’t know me that well its a chance to say, ‘Hello, here’s what I’m about.’”

Goldstein is bringing his This Never Happened tour to the Mishawaka Amphitheater later this month, and utilizing the venue’s lax atmosphere to present a different show. Unlike most electronic shows at that venue, Goldstein will play a two-hour warm-up set, starting at 2 p.m. followed by a performance from his special guest, Luttrell, then finishing with another three hour set of his own. Goldstein said the remoteness of the Mishawaka is exactly what his team had in mind when choosing venues to curate the latest tour.

“I like to think about not just the three or four hours that people are at a show, but look at their whole journey and think about the fact that some people have traveled to be there. In the case of the Mish, they’ve driven for at least an hour. It’s pretty remote and there’s sort of a journey there. And I hope at least it makes the show even more special in a way because it’s not just something that’s right around the corner. I guess in a way that’s what people like about music festivals, going on a road trip with your friends, half the appeal of these kind of things is the journey in itself and that’s something that we’re pretty mindful of.”