Trending Stories from The Marquee
You are at:Home»Album Reviews»itchy-O ‘From the Overflowing’
By Marquee Magazine on September 1, 2017 Album Reviews, Brian F. Johnson 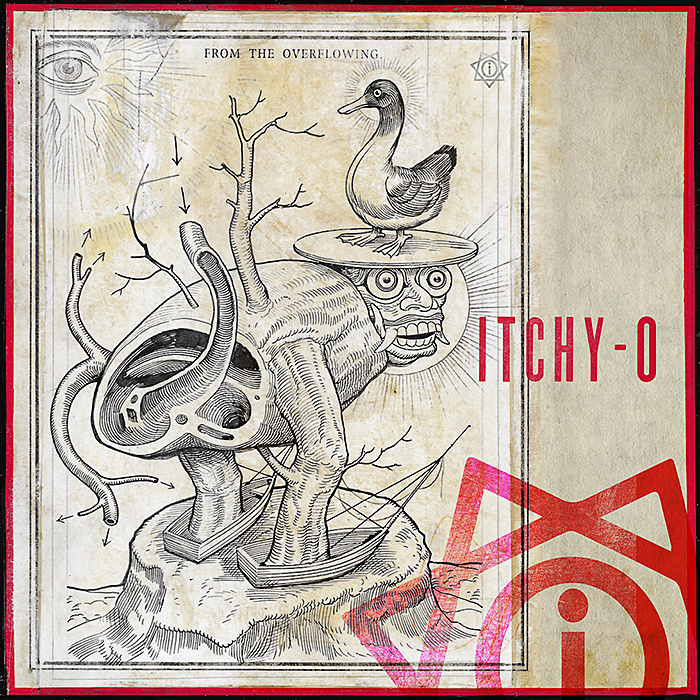 In Mad Max: Fury Road, Coma The Doof Warrior is the hauntingly creepy, blind band leader. He’s the one who plays a flame-throwing guitar suspended above the massive wall-of-sound adorned “Doof Wagon” that rides them into battle. Well, when that motherfucker goes home after a hard day of being the musical conductor for a barbarian militia, he kicks up his heels and listens to itchy-O.

With waves of Taiko drummers, sinister guitar riffs, and a line up so huge it can be counted by the dozens, itchy-O is a mass of chaos, power, and performance that is primally infectious and cathartic, and as they put it, “waging a war on predictable mediocrity.”

itchy-O will always live in the live realm the most comfortably, where they menacingly play in masks and their numbers — which vary from 32 to 50 members and includes an “artfully hazardous” Chinese lion and a troupe of sensuous dancing provocateurs — create an absolutely massive sensory overload experience. But with their latest Alternative Tentacles release From The Overflowing, this marching band on acid has found a way to capture their fury and intensity which fans can listen to long after the lights come up and the sweaty masses of the audience wonder what the hell they just witnessed.

One internet comment said that itchy-O is like “Blue Man Group meets Slipknot,” while another offered the description “medieval industrial funk groove drumline.” Both are correct, but beyond the what-the-fuck factor, From The Overflowing showcases the depth that this initially uni-dimensional seeming music can pose.

From the riff-tastic “An Eagle Brought Me Honey”  to the snarl-filled battle-march title track, to the dark, plodding musical soundscape of “Mystrabia – Under The Lake,” itchy-O shows over and over again that they’re not a bunch of stoned hippies passively sitting around a sloppy drum circle. Instead, they’re shaping these intrinsic rhythms and beats with new musical perspectives that are as sophisticated and complex as they are savage and primordial.

Simply put, the marching band nerds have grown up and they’re one-hundred times cooler and more sinister than anyone ever imagined.