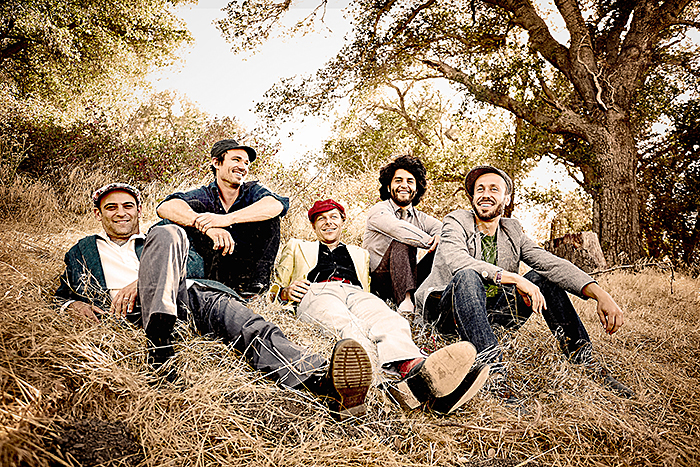 In the ten years since The California Honeydrops first broke away from their makeshift subway stages, the retro revival minimalists have built a rabid following playing festivals ranging from Telluride Blues & Brews to Burning Man and supporting the likes of B.B. King, Allen Toussaint, and Bonnie Raitt.

But with their roots in street performance and busking, which perfectly suits their old-fashioned town crier musical form, the Honeydrops cut their teeth in the most unforgiving of environments and yet they persevered, survived, and eventually thrived, while managing to capture crowds made up of people who initially wanted to blast past them on their commute.

While their name is an homage to the early 20th-century string and country blues group, The Tennessee Chocolate Drops, the band has invented their own sound that draws on those influences and many more, and comes across as a modern twi­st on some down home soul.

“Even when we started on the street as a jug band we still didn’t have a regular tub bass, we had the ‘Soul Tub’ because we liked playing any kind of music on it,” said The Honeydrops founding drummer Ben Malament as he walked the aisles of Party City picking up supplies for his daughter’s seventh birthday party. “We didn’t just want to stick to one kind of music, we liked everything from Big Bill Broonzy to Sam Cooke, from The Falcons to Parliament to Sly Stone to Curtis Mayfield to Sister Rosetta Tharpe and Rebirth Brass Band, as well as all the music coming out of the Caribbean. All of it was really important to us. Honestly, it’s all about the connection of all that music. You can hear the musical connections between Jamaican Mento and Second Line music and Afro-Cuban music and jazz and blues and R&B and gospel.  This band is about hearing the connection between all of the styles and doing our part to do justice to them. We don’t like copying straight up, but we like paying respect to the music that we love while trying to come correct with the feel. That’s a huge part of what makes the Honeydrops who we are and what keeps us inspired.”

Malament explained that the Honeydrops were so inspired recently as they recorded the follow-up to their 2015 release A River’s Invitation that they might have laid down enough songs to release a double album next spring. “I think we did a really good job of displaying our original music and we have just gotten better and better at being able to communicate all of our influences with our own style,” he said. “There’s stuff that goes back to our more R&B roots, jug band stuff with the tub bass, acoustic style blues, then there is also more electrified modern sounds. They still aren’t that modern, but there is some second line music, a lot of stuff with horns, brass band style, and there are some tracks that are more organ-based R&B songs featuring Mike Finnegan from Bonnie Raitt’s band and some other great guests. We are just trying to piece it together so it doesn’t sound too random but so that everyone can get a good healthy taste of everything that we like to play.”

While Malament’s bandmate, founding lead singer and trumpeter Lech Wierzynski, admitted in a 2016 interview that “breaking into the mainstream music industry with an easily identifiable sound is damn near impossible” the band has remained true to their own sound and is reaping some rewards as their tour schedule now includes headlining shows in rooms like two nights at The Bowery Ballroom in New York City, The Higher Ground in Burlington Vermont, and The Ogden here in Denver.  “We’ve never felt boxed into a genre. We’ve never felt ourselves pigeonholed,” Malament said. “There are so many ways to be pigeonholed these days, and you know, for better or for worse they give you a fan base, they give you a scene, but that has never ever been our desire or where we come from and we are so grateful and appreciative of all those fans from all those different genres that have taken us in and all those promoters and all those festivals that have given us a chance.”

Whether billed as a blues band, an R&B band, a revivalist soul group or a New Orleans style party band, the energy The Honeydrops pour into each and every show spills off the stage. “When people come to our shows, I think they get a feeling that we like to do more than just get up on stage and perform,” said Malament. “That comes from our love of playing out in the crowd and out in the street. Especially in our shows lately, there is so much impromptu call and response stuff with the audience. There is so much stuff where we will start something that we have never played before, ever, and just make it up with the crowd. It might morph into a song from an album or it might morph into a Bobby Charles song or a WAR song or something like that but the basis is not knowing exactly what’s going to happen next and just knowing that the room is on fire and the room is alive and electric with us. That’s the fun of it and I think that kind of thing in the shows comes from that time playing on the street and banging on street posts and just crashing other people’s concerts with our drums and horns and that kind of stuff. That’s something that has stuck with the band and something I think people will have a good time with when they come out to the shows.”