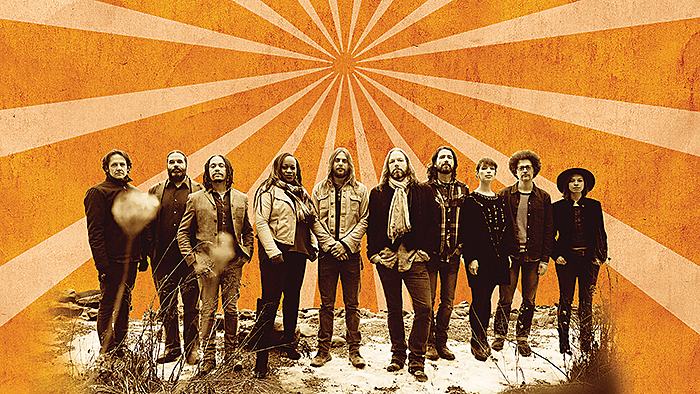 It might be initially difficult to believe but Rich Robinson — with his new band The Magpie Salute — isn’t trying to send messages to his brother Chris, with whom he founded The Black Crowes.

The Magpie Salute’s first single contains the lyric “Everywhere I go there’s a shadow of you,” on a song that’s called “Omission” from a band that’s pretty much the Crowes except for Chris. But Robinson contends that it wasn’t meant as any sort of musical communication to his brother.

“It was written before all this shit happened,” Robinson said during a recent interview with The Marquee. “Maybe it was prophetic back then, but it literally has nothing to do with it. It’s funny. It does come out like that, but there was nothing intentional about it. It just happens to be.”

Robinson’s latest creation The Magpie Salute, which reunites him with Black Crowes alumni Marc Ford — the guitarist on much of the Crowes most crucial elements of their catalog — came together in 2016 originally as a one-off at Applehead Recording in Woodstock, New York, where Robinson was again gathering friends for a live recording experience. He had done one previous “Woodstock Session” in 2014. Robinson reached out to Ford, with whom he hadn’t directly communicated in years, and then called Crowes keyboardist Eddie Harsch, who also eagerly joined the session. Additionally Robinson’s core solo band, which includes long-time collaborator and Crowes percussionist Joe Magistro and Crowes bassist Sven Pipien, came along and were joined by Crowes background vocalist Charity White, as well as two other vocalists, and just like that, Robinson had not only put together the closest thing to a Black Crowes reunion as is likely to ever be, but he added a wealth of other players with whom he’s had a long history. “This is more about inclusions instead of exclusion,” he said. “It was more about letting people in than keeping people out.”

They recorded the sessions and then went back to life, with Robinson continuing along his solo tour. But a few weeks later, after the magic of that gathering rattled around in his brain for a while, Robinson realized the bigger picture of the idea. He explained that much the way the members of The Grateful Dead pay homage to the music created both before and after Jerry Garcia’s passing in their various projects, he wants The Magpie Salute to celebrate the music of their past and lay a foundation for music that has come since.

“This music is my life’s work. It has meant a tremendous amount to me as a person and it’s been a huge part in Marc’s life and Sven’s life, and it was a huge part of Eddie’s life. It comes down to the fact that we want to play this music and Chris doesn’t. He constantly goes in the press and says he doesn’t want to play this stuff. He constantly goes in the press and says that this music was tedious to him and blah, blah, blah, whatever he says. He said he didn’t want to tour and that he wanted to do his thing and asks us for a ton of money and ultimately, you know, if you just follow his logic, follow his words and his actions, he doesn’t want to do it. And I do. And what I want to do is celebrate music and celebrate the musical relationship that I have with Marc and Sven and Joe and these people.  And celebrate that music — Crowes music — but also  new music and Marc’s music and my music.”

It dawned on Robinson that the group had, almost accidentally, recorded an album while in Woodstock, except for the aforementioned full studio track “Omission,” that includes vocalist John Hogg from the Robinson-lead band Hookah Brown. In June they released their self-titled debut, which sadly serves as Eddie Harsch’s final recording. The keyboardist died in November 2016 at the age of 59.

The Magpie Salute continued, of course, hosting a sold out, four-night run at the Gramercy Theatre in January, and they have followed that with a large European and now U.S. tour, and they have plans for another album that they hope to release early next year.

Robinson said it’s all going so smoothly and that part of that was the member’s dedication to approach the band exactly the way the U.K.-born superstition known as the Magpie Salute dictates.

“When you salute the magpie you say, ‘Good morning, Captain,’  which is a connection to the band and I felt like all of these things were pointing in that direction — the light and the dark. We come in peace. A magpie is a cousin of a crow, but it’s not a crow. It represents light and dark and there’s a lot of elements about it that I thought were apropos because I’m not ignoring the fact that I was in The Black Crowes and that’s where this thing was born from. When you salute, you’re taking an action and we’re taking an action for positivity and for peacefulness and beauty in music and there’s a lot of connections from the old to the new, but I’m really excited about where we’re going rather than where we’ve been, even though we’re celebrating where we’ve been.”