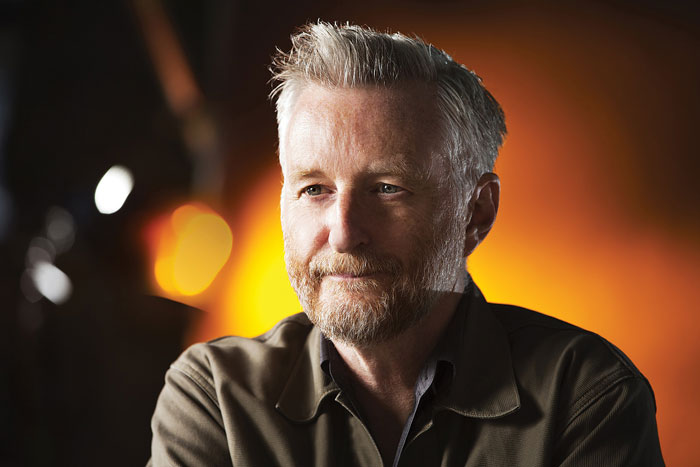 Billy Bragg is pushing 60, but he’s still got a boiling punk rock anger at the establishment and injustice, and the world just keeps throwing massive amounts of fuel onto his already roaring fire. The modern protest singer — who captured a wealth of notoriety for his contributions to the Woody Guthrie-based Mermaid Avenue albums with Wilco — can’t help but burst forth with thought-provoking, deep lyrics. Bragg has so much to point out in fact, that he’s putting out a series of releases over the coming months that he hopes will turn the focus of music back to the most critical issues in our world, and let listeners, politicians and fascists everywhere know that there is real, justified anger out there, that doesn’t just live on the internet.

“Mainstream music no longer contains as much topical stuff as it used to,” Bragg told The Marquee from his office in the U.K. as he got ready for a North American tour. “That kind of anger has moved online. People who want to say something about the world no longer need to learn how to play guitar, write songs, and do gigs to be heard; they have Facebook and Twitter and Instagram and the ability to write blogs and make films on their phones.  Those angry people have moved elsewhere but I’m still out there going to bat for songs to say something.”

Bragg just recently released a book called Roots, Radicals and Rockers: How Skiffle Changed the World that cements Britain’s Skiffle movement of the ’50s as the link between traditional jazz and rock and roll. And his most current project harkens back to his own radical roots. “In the old days I used to have to wait until I put out a formal album to have my say on issues, but these days, with the internet, you don’t have to wait six months or a year until the next record comes out. So I am able to record topical songs and more or less get them out immediately,” he said of his current run of six digital downloads.  “I certainly don’t intend to put out a new album next year. I need some time to get myself together to do that. But the things that have happened in the last 18 months really do deserve some kind of response and that’s what I’m trying to do with this project,” Bragg said.

The first in the series, “The Sleep of Reason,” was released back in July to wide acclaim and it was followed by a song that has remarkable significance in both today’s political climate and in the midst of this year’s devastating hurricane season. “King Tide and the Sunny Day Flood” features lines that put things as plainly as possible like “To think that you can stand aside, is nothing more than foolish pride” and “It should come as no surprise, to learn about the ocean’s rise.”

“‘King Tide and the Sunny Day Flood’ has, at its heart, a warming ocean and the planet is 70 percent ocean,” Bragg said solemnly. “We all know that the planet drives the climate and we are uniquely aware of that in the U.K. because we have the Gulf Stream which stops our sea from icing over. If you start to turn up the temperature of the ocean, then the climate will change rapidly. One of the things that have been quite disturbing the last few weeks is that the temperature of the Gulf of Mexico is allowing these hurricanes to pick up more power as they cross between the islands. They go down to a category four when they hit an island and then skip back up to a five again as they cross the Gulf. It’s a real concern. The last time that the atmosphere was four degrees warmer, the ocean was 18 meters deeper. So we really have a challenge here.”

While Bragg’s point resonates with so many in the world who feel it both directly and indirectly, it seems to be lost on our current political leadership and Bragg had something to say about that as well. “One of the main issues that animates Trump, and animates the Brexit debate in my country, is immigration and mass migration and as the planet warms more and more people are not going to be able to sustain family life in warm areas. As things get ridiculously hot people are going to start to move,” he reasoned. “So it’s in all of our interests, both those of us who care about the climate and those who care about immigration, to do something about this issue so people are able to have viable secure lives where they live.”

Bragg hit on Trump’s “Build The Wall” rallying cry with the release of a cover of Anais Mitchell’s “Why We Build The Wall” in September, but his October release takes its timely key from the tragic events in Charlottesville in August. “I’ve written a lot of angry anti-fascist songs so I figured that rather than just write another one I’ve taken my queue this time from a photograph of a British Asian woman confronting a white supremacist on the streets of Birmingham earlier this year,” he said.  “She’s kind of just smiling at him. He’s ranting at her and she’s smiling at him and you can see where the power is.  This woman has totally disarmed this guy just by smiling at his rant and a policeman is coming in to take the guy away. I think that idea of a smiling response to these kinds of people is one of the many ways that we need to respond to this issue. It’s not always the one that works but it’s the one that will allow you to show your solidarity for one another.”

With this series of releases and his Bridges Not Walls tour, Bragg is doing his part to turn the focus of music back to the most critical issues in our world.  “Back in the 20th century, music was the only social medium that was available to us and it had to encapsulate everything in human existence. So love was in there, politics was in there, everything was in there,” he explained.  “The music you listened to defined you as a person, what you wore, who you hung out with, who you didn’t hang out with, stuff like that. Now that role has moved on to social media in a way that is fragmented. In that sense, music has gone back toward entertainment value where it was before the 1960s but there are still musicians making vital music that has something to say.”