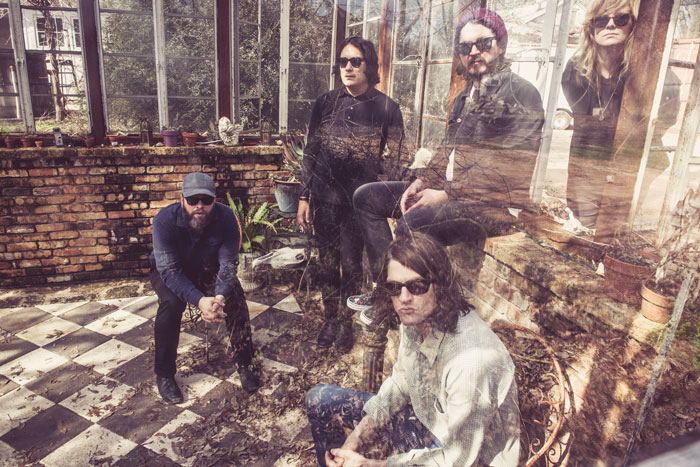 “Art is a lens that reflects our society and politics,” Alex Maas, lead singer of The Black Angels reflected. Maas spoke to The Marquee on the phone during the band’s European tour, as he dodged bikers, trams, and tourists in the hectic streets of Amsterdam. “It’s like a mirror, with its own unique color palette, since the goal of the art is up to the artist. For us, we would encourage people to reconsider their preconceived notions, break down those barriers around what they think is normal, question everything — and think for themselves.”

Although not often described as an overtly political band, The Black Angels have never shied away from wrestling with our troubled reality, while simultaneously immersing fans in their immense, otherworldly psych rock. “As a band, we’ve always felt an obligation to try and talk about important issues and to try to describe the world as we see it — and it’s not always pretty,” Maas explained.

When the band started writing the songs that would end up on their latest release Death Song three years ago, they were simply heeding their own obligation to awareness. That the album is particularly well-timed to tap the current tumultuous landscape is coincidental but, as Maas said, “I think if this record came out three years ago, I don’t think it would have had the reception it has had now. I think that people’s eyes are open more right now.”

Even if more listeners are tuning into this particular station, The Black Angels are not here to provide easy answers or tired polemics. “You don’t want to be a preacher and point fingers,” Maas explained. “A lot of times when I’m writing lyrics or we’re writing as a band, we may have an intention in mind but it may not immediately make sense to anyone else. So we have to go back and think, ‘Okay, what are we really trying to say here?’ And then, ‘What are we trying to say, but not say it straight up? How can we make people think about what we’re saying?’ It goes back to encouraging people to think for themselves. If you just tell people what to think, that defeats the purpose.”

And you’ve got to write killer songs. From the explosive opening track “Currency” to the ethereal Bowie-esque closer “Life Song,” Death Song also signals a new high watermark in the band’s career. Moments of melodic grace (“Half Believing,” “Estimate”) intermingle with dance floor decibel pushers (“I Dreamt,” “Medicine”), an expansive range, but all honor the psych-rock aesthetic that marks them as The Black Angels.

“I really think this last record opened up a lot of exciting musical directions for us,” Maas related. “It’s almost like we can write anything now. I listen to this record and it’s got psychedelic moments but it doesn’t feel like a 60’s psych record. I like the honesty, and the feeling those songs give me when we play them live is still what you could consider a psychedelic experience. It’s just a different side of our band and I love flying towards that new sound. We’ve never done anything like that before. But it also feels like we haven’t lost any DNA in the process.”

That psychedelic ethos permeates beyond the band’s sound. One component is their stunning light show, which fuses old-school, large-scale projection with modern sophistication, thanks to lighting designer Bob Mustachio. Mustachio has worked with The Black Angels for several years and could rightfully be considered another member of the band. Besides his technical wizardry, Moustachio’s background as a drummer allows him to tune into the cadence of the music. “As far as a light designer goes, it’s great to find somebody who knows your music AND has rhythm,” Maas explains. “We also wanted to work with Bob because he’s a uniquely creative minded person. So we bought a bunch of equipment and just kind of let him loose. He’s really into what he does. Like, he likes to get vintage video gear from the ’80s and tweak it out. He also likes to manipulate real-time footage. He will take the band and make it look like we’re in an infinity mirror on stage. He’s so great at what he does. He’s like a scientist.”

The Black Angels are part of the greater cultural psychedelic movement that runs deeper than pupil-dilating visuals and fuzzy guitar drones. Their own festival, Levitation Fest, has been a nexus point in this burgeoning scene. After making the heart-wrenching decision to cancel the festival due to weather-related safety concerns in 2016, Levitation will be back in 2018, albeit scaled back some.

“We didn’t throw in the towel but we did get the rug pulled out from under us,” Maas said. “Getting hit by that bad weather in 2016 really crushed us and crippled us financially, so we can’t really afford to take any big risks this year. Maybe people will like that scaled-back approach though. You’ll be able to see bands on smaller stages and more intimate venues. But as far as 2019 goes, I think we’ll be back on our feet with a bigger festival.”

This psychedelic countercurrent that The Black Angels swim in also provides an alternative model to the dehumanizing, destructive drive of consumptive capitalism. We needn’t sing to our demise just yet. “Find the others,” as Timothy Leary said, and you will find that hopeful momentum.

“We support the idea of a psychedelic community and movement, which to me is a progressive-minded culture that’s aware of what’s happening,” Maas reflected. “It’s a culture where everyone is really supportive of one another. I don’t meet a lot of people in this culture who are jealous of other artists, at least speaking for the scene we’ve experienced at Levitation Fest. It’s just a very open-minded, progressive culture that surrounds this movement.”

“So where do we fit in?” Maas continued. “I don’t know. It’s probably too early to say. Maybe in 10 years, we can tell where we fit it. But, and I’ve said this before, I do feel if psychedelic music became the popular music of the world, the world would be a better place.”