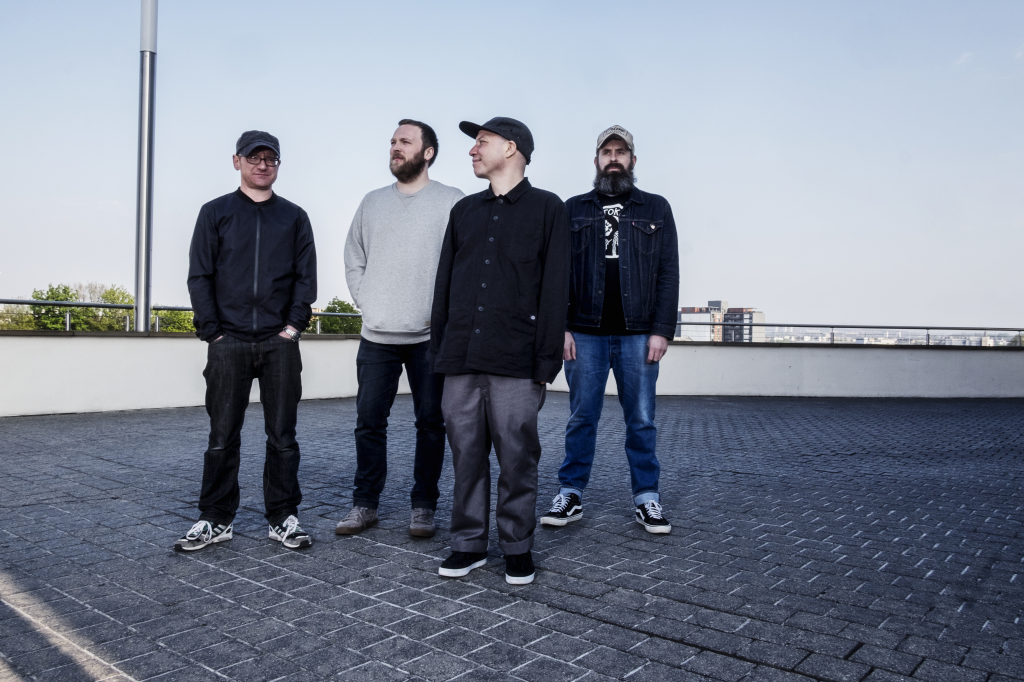 The phrase “every country’s sun” can easily conjure images of a unified, utopian planet, but as that phrase pertains to Mogwai’s latest record, the origins of the phrase and its seemingly idyllic sentiment take on a darker, more sinister tone.

During a recent interview with The Marquee, Mogwai guitarist and vocalist Stuart Braithwaite explained the rather absurd story that ultimately birthed the album title.

“Someone we know — a very close acquaintance, might I add, possibly even a family connection,” Braithwaite nervously laughed, “hadn’t really made any efforts to understand the basics of astronomy. They didn’t know that the sun was a star. And they thought that every place you visited had its own temperature and was light at different times because they thought that every country had its own sun. They didn’t realize it was just one sun.”

The mind-blowing daftness of Mogwai’s friend aside, Braithwaite and company found a positivity in the sentiment and applied the theme to their ninth studio album Every Country’s Sun, which they released this fall.

“I guess you can take that misunderstanding and apply a definite philosophy to it that’s really positive,” Braithwaite said. “It worked out quite nicely and, thankfully, this person now understands the basics of the solar system,” he laughed.

And, in following the thought all the way through, the Scottish post-rock and cinematic heroes, who just last month celebrated the 20th anniversary of their debut release Young Team, have come full circle to the age-old, but often camouflaged sentiment — that people are the same no matter their outward appearances or innermost thoughts.

“I think it’s a weird thing, just now, and a lot of people kind of look at their own situations and maybe they aren’t that great and they kind of do what Weimar Germany did and they blame ‘the others.’ They blame the people that they don’t know as well,” Braithwaite said. “I think the more you travel the more you see we’re all the same. We may eat different food and go at different charts or something but people are just the same and I think sometimes people forget that. All that stuff was definitely going through my head in this inescapable last year, this year was quite intense with a lot of negativity, you know?”

As if in retort to that tension and negativity, Mogwai seems to, with Every Country’s Sun, put forth one of their most approachable albums to date. “Hungry for another piece of mind,” Braithwaite uncharacteristically sings on the track “Party In The Dark,” the group’s most outwardly pop venture of the last decade, which comes across as a message from the band that we are all, or at least a lot of us are “directionless and innocent.” Keyboardist/guitarist Barry Burns told Mojo that the track is “as close to a radio hit as we’re likely to get.” But, almost as if they were nervous that they broke from their instrumental roots on that track, they countered with an abstract, art-scape stop-action video that is, in typical Mogwai form, simply epic.

“We’ve always wanted people to decipher their own lyrics and what they mean to them personally,” Braithwaite said. “It’s almost like once the music is made and once it’s out in the world it belongs to the people listening to it. So, we may as well just show them some cool explosions and no one can get to­o confused by that.”

The album, which the band released on their own label Rock Action in the U.K. and Europe, and on Temporary Residence Limited in the States, was called “brash, gritty, unpretentious and thrillingly claustrophobic” by Pitchfork, a step beyond the “guitarmageddons” of their earlier career and “textbook late-period Mogwai: distant, pensive, electro-curious but noncommittal.”

From the aforementioned pop leanings of “Party In The Dark” to the Scot’s tongue-in-cheek heaviness of “Brain Sweeties,” and from the ironically-named, but mellow “aka 47” to the spiritual folk drone of “1000 Foot Face,” the band explores vast soundscapes on Every Country’s Sun.

In addition to their two-decade career, Braithwaite and his bandmates Dominic Aitchison, Martin Bulloch and Barry Burns gained massive notoriety in recent years for scoring films including 2006’s Zidane: A 21st Century Portrait, 2015’s chilling nuclear documentary Atomic, Living in Dread and Promise and 2016’s film about climate change Before The Flood, which featured Leonardo DiCaprio as one of the film’s producers and the famed Martin Scorsese as executive producer. Every Country’s Sun track “Coolverine,” in fact, originally appeared on the Before The Flood soundtrack and the group re-worked it to be “less soundtracky” for the album.

The album is the first to see Mogwai as a quartet, after the departure of John Cummings in 2015. Cummings wasn’t a founding member of the band but had been a member since their earliest recordings. While he recognized that it was an amicable split, Braithwaite in Scottish fashion made it seem like a non-issue. “We just had to work a bit harder,” he said of Cummings’ absence. “We just had to get on with it and had to write more songs.”

In addition to that change in personnel, Mogwai is also in a different form for this tour due to drummer Martin Bulloch being ill. In early October the group announced that Bulloch, who was previously listed as “Bionic” due to his pacemaker, would not be joining on the tour. “He’s home now,” Braithwaite said. “He’s out of the hospital. So that’s a good sign. He’s getting better. I don’t think he’ll be playing drums any time very soon, but hopefully, it’s not too long away.”

Cat Myers of the band Honeyblood was immediately summoned to fill in for a special BBC gig that the group had before the tour. “Considering we had like five days rehearsal before we had to do a live thing for the BBC, she’s doing great,” Braithwaite reported. “Initially, we thought Martin was going to be back, so it just went from rehearsing some songs for the session and then it became a ‘You’re going on tour.’ I can’t really compliment her enough.”

Mogwai rehearsed the new tracks in their native Glasgow before recording the album in upstate New York last winter with their longtime friend and collaborator Dave Fridmann, who last worked with the band on their 2001 release Rock Action.

“When we recorded Dave was sort of keen on us being as live as possible, so quite a lot of the songs — the main part that you’re hearing — is just us playing in the room,” Braithaite said. “Personally, I like to be as live as we can. On other records, we just layered and added and added until we just don’t have enough hands to play it all. But this was different this time around.