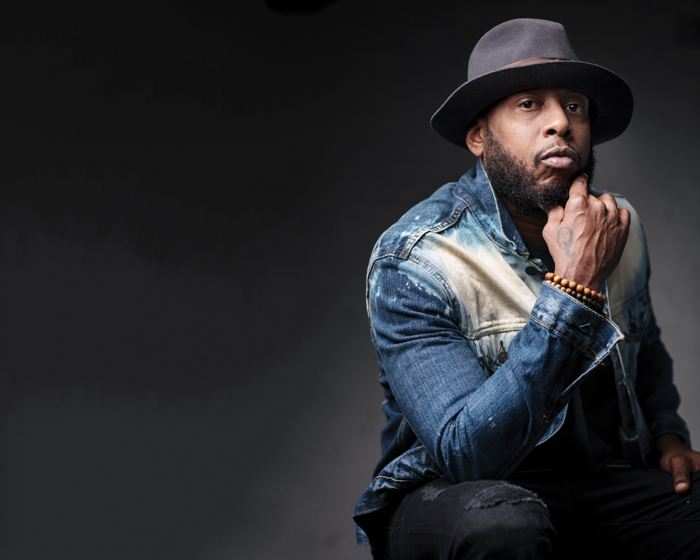 Brooklyn is responsible for a long lineage of hip-hop royalty, and though Kings County may not be a monarchy, Talib Kweli is its philosopher king. Now, two decades after his Black Star breakthrough with Mos Def, Kweli continues his path as the stoic face of conscious hip-hop. His latest release, Radio Silence, marks his eighth solo album and another return to the allegorical cave to drop some truth and enlighten us on the shadows of our reality.

The past few years have been fraught with social and political chaos and in times like this, people look for truth in music. But often the spotlight is shone on conscious artists only when it’s convenient — assuming the current political zeitgeist is charging them with even more conviction. And though Kweli is honored to be held to that esteem, he’s no fair-weather activist.

“I get asked this question a lot with Trump — who’s sent mainstream politics into disarray — I get asked if the climate is affecting the music. I’m always writing about the climate. It’s not an empty vacuum space,” Kweli told The Marquee in a recent interview. It’s that sentiment that can be heard in the opening lines of “All of Us” when he says, “My name is prominent for entertainment that’s laced with consciousness, but really it’s just common sense.”

Kweli says he’s noticed his music gets played more often on the radio or he gets asked to appear on talk shows and interviews when there are racially charged events and tragedies in the media. In the aftermath of the Michael Brown shooting in Ferguson, Kweli got into a heated debate with Don Lemon, when the CNN anchor was dismissive of his perspective and unfamiliar with the rapper’s persona. But Kweli has been known to stand his ground and nowhere is that more evident than on his Twitter feed. There, among the litany of alt-right vitriol and internet trolling, one would be hard-pressed to find a comment that lacks a riposte from the rapper.

The bickering can turn into name-calling and mudslinging pretty quickly, but when asked about his thoughts on social inequality and racial issues, Kweli has some prudent advice for how to behave in our digital dialectic.

In ancient Greece, the philosopher was characterized by other citizens for standing around in the street, debating about the ethereal and esoteric. On one of his new tracks Kweli raps, “I come from the God body era, I come from standing on street corners, smoking blunts outta white owls with 40s, building and destroying about the suns and the planets and the moons and the stars, about the nature of man, about knowledge, wisdom, and understanding.”

Kweli is Brooklyn’s street philosopher and clearly he doesn’t sweat the internet trolls. But in this era of fake news, vapid entertainment and ignorance in the media, some can’t help but feel jaded with what’s becoming popular in hip-hop. With mumble rap, auto-tune and the purple drank-drenched delirium, many are wondering if ‘conscious’ hip-hop is fading away. That ‘conscious’ epithet has even been traded for the simplified cliché, ‘#woke.’ But Kweli understands the new era and is quick to remind us not to be judgmental.

“I think it’s very seductive to complain about hip-hop, but part of the DNA of hip-hop is complaining about other hip-hop artists,” Kweli said. “If you look at some of the old school stuff they were doing the same thing, it was a backlash to what was mainstream. As far as sounding ignorant, when I was a kid, I was listening to those artists like ODB and Mobb Deep, but I was also listening to Tribe Called Quest, De La Soul and Digable Planets. Maybe back then with ignorant hip-hop, the beats were more boom-bap, more east coast, but it’s the product of what young people were going through, their struggles of living in poverty, experiencing racism, classism. You know, young people are gonna talk about ignorant shit.”

Kweli is also quick to point out that there are a lot of successful artists right now producing music with meaning that can’t be overlooked.

“If you really wanna talk numbers, Kendrick Lamar is one of the biggest names right now with his sold-out tours and numerous Grammys,” Kweli said. “Chance (the Rapper) is extremely popular and he’s hosting SNL. I can’t think of a rapper before him who’s hosted SNL without also making a career as an actor. We just talk about negative shit because we’re drawn to it and I think that’s the case with ignorant hip-hop. It’s like seeing a car crash, you gotta slow down and look.”

And Kweli still draws a respectable line when it comes to bringing in younger artist cameos with his music. The new album’s most energetic track, “Traveling Light,” brings in two of hip-hop’s most creative names with Kweli having been aware of their potential long before they blew up. “Getting to know Anderson .Paak better, I started realizing where he was getting his music from and he picked that track when he heard it,” Kweli said. “With Kaytranada, the moment you see him in that video, was the first time I met him. My boy Tunji (Balogun) sent me a lot of his tracks years ago, but that was before Kaytranada was prevalent, before he had millions of streams on SoundCloud.”

Kweli has always been a step ahead of the game, experimenting with different styles and disparate artists, and Radio Silence is no exception. In addition to .Paak and Kaytranada the album includes Waka Flocka Flame, Jay Electronica, Rick Ross and the Dirty Projectors’  Amber Coffman, among others. He just can’t help but collaborate, and this month, while in the midst of his own solo tour, Kweli dropped the news that he and Yasiin Bey (Mos Def) would rekindle their on-again, off-again legendary underground hip-hop duo Black Star for a one-off in the Mile High. The group, which quite literally helped shape and define underground alternative rap, has always had an intermittent quality to them, but while they toured together as recently as last year, every time they announce a concert the word “reunion” is used. Their show at the Ogden this month will be Black Star’s first performance in Denver since May of 2012.