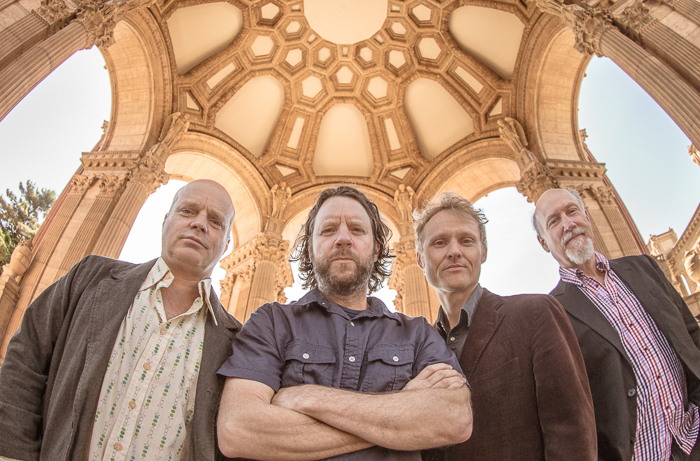 In every life, there are a few times when opportunity presents itself in a way that literally shakes people to stop what they’re doing and pay attention. For experimental jazz-funk band Medeski Martin & Wood, one of those opportunities came in the form of an out of the blue answering machine message in the late ’90s.

“More than 20 years ago — before cell phones or social media or anything — Medeski Martin & Wood had a 1-800 fan hotline,” keyboardist John Medeski told The Marquee as he made his way from the Woodstock, N.Y. area to Manhattan for a special guest slot with his bandmate Chris Wood’s other project The Wood Brothers. “At that particular point in time, we were spending our winters in Hawaii — around the Shack-man era for us — because we were basically touring around the US and living in a camper, so winter was not the best and we would take our winters off and play and hang out and work on music. In retrospect, we were sort of developing our connection and our language. We were in the middle of nowhere in the jungle with solar power and we would go into town once a week, or once every ten days or so. On one of our supply runs in Hilo, Chris Wood and I went to a pay phone to check the voicemail of our hotline and there was a message from somebody saying ‘Hey this is John Scofield.’ Chris and I were sure it was some friend of ours messing with us. I have a friend in particular who I thought it was, this guy Mike Rivard, bass player in a band called Club d’Elf, who would do something like that and I was sure it was him screwing around with us. We listened to it a couple of times and finally decided to call the number back and it actually was John Scofield and that was the start of a great relationship.”

It wasn’t long after that first phone call that Medeski, Wood and their drummer Billy Martin met up with the legendary guitarist in the studio to test the waters. “He had heard us — I don’t know how — and he thought we’d be a good match,” Medeski remembered. “I had personally been a fan of Sco’s for a long time. Obviously the stuff with Miles [Davis], and he had another trio before that which I really loved. So we thought it would be kinda fun to see how it worked out, so we got together rehearsed and then we recorded A Go Go. That one is really his record — his music. We put our stank on it, but it was really his concept.”

Even listening back to the album today, it’s clear that the project was a lot of fun for everyone involved; the bubbling grooves, masterfully phrased guitar licks, and filthy organ swells had several unintended consequences. “The record did really well for all of us in different ways,” Medeski explained. “For Sco it sorta awakened our audience and the jammy people to him and what he was doing. For us, it hadn’t really been worth it for us to play much in Europe because there is this whole jazz pedigree thing that they value so highly — it’s the kind of thing where if you played with Miles Davis they love you — and in a way doing this record with Sco gave us a certain credibility over there that we didn’t have before. It was very mutually beneficial, plus musically it was really a great match. All four of us have different backgrounds but we share a lot of common ground, especially with the improvising and the kind of groove music we like.”

Despite the success of A Go Go, the inaugural Medeski, Scofield, Martin & Wood tour didn’t happen on the heels of the album’s release. “Billy Martin had his first baby around then and was staying home during the time the record came out so we ended up doing a tour with myself, Chris Wood and Clyde Stubblefield from James Brown’s band as the rhythm section for Sco and that tour was a blast. Getting to play with Clyde was a very different sensibility than playing with Billy,” said Medeski.

In the intervening 20 years, Scofield has joined up with MMW on several occasions and the group has unleashed three more albums and played a smattering of shows as a quartet. “After A Go Go a few years went by and we were like ‘Maybe we should do something with Sco again? That kinda worked out well for everybody.’ So we got together and made Out Louder together and that one was more of a collaborative record. It was also really fun and we got to do some gigs on that. Something just started to develop; we’d do something with Sco, then we’d all go our separate ways and then time goes by and we really miss Sco so we do something again. It just kept happening and we put out a live record in 2011 and then Juice a couple of years ago.”

With 2018 being the official 20th anniversary of the release of A Go Go, the four decided to honor the music that set them on this unique path together by playing some shows featuring that repertoire. After a full set on Jam Cruise back in January where they played the entire album, the two nights in Denver are the only other shows currently on the books. “We had hoped to be doing more of these shows around the 20th anniversary but scheduling made it really hard, so the Denver shows are rarer than we thought they would be and we are excited,” Medeski revealed. “We’ll be doing all of the A Go Go stuff and other things from the other records and new things we’ve never done before. I think we’ve realized more and more each time we’ve gotten together that there’s a certain chemistry that we have. It’s different than when it’s just the three of us or when we play with someone else. There aren’t a lot of people that can come and play with us where we end up with an equal dialogue. Sco is one of those people and we are lucky to have a 20-year history with him.”