Trending Stories from The Marquee
You are at:Home»Cover Story»Durand Jones & The Indications
By Marquee Magazine on April 1, 2018 Cover Story, Features, Interviews, Timothy Dwenger 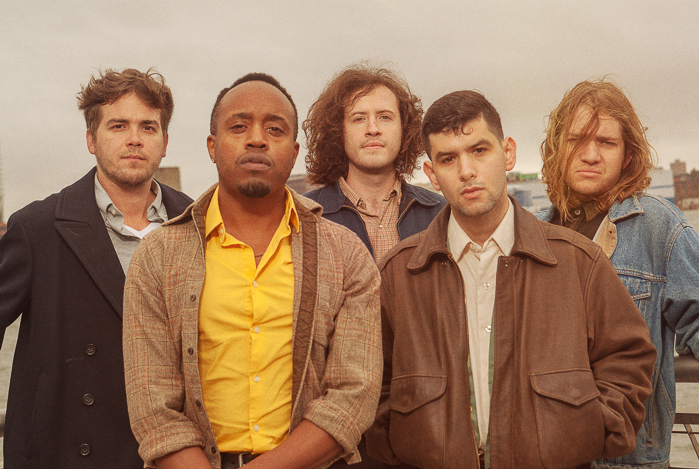 Is it glossy and polished or raw and ragged?  Are the vocals front and center or buried in the mix? These are the questions that audiophiles are asking themselves as soon as the needle hits the vinyl and sometimes just the way a record sounds gives the listener all the information they need to know. In the end, when it comes right down to it, the fact is that the production values are arguably as important as the music itself, but do the “best sounding” records always cost the most to record?  That’s the interesting question.

Durand Jones & The Indications are a relatively new soul band and their eponymous debut album has been getting glowing reviews from all realms of the musical press. While Paste Magazine said “With a tingling rasp that screams James Brown and coos Otis Redding, Jones simply has to be heard to be believed on these vintage R&B pleas,” Toronto’s Spill Magazine raved “The album is beautifully produced… Jones absolutely dominates the songs with his powerful, soulful and ever-evolving voice.” Spill’s accolades are a compliment to any producer but it has to be noted that The Indications produced the album themselves on a bare-bones budget rumored to be under $500. While the band didn’t confirm the actual amount spent on the record, during a recent group interview with The Marquee guitarist Blake Rhein admitted “We spent very, very little recording this album. Frankly, I take a lot of pride in being able to record with very minimal equipment. We all studied audio engineering so we all had some gear and really didn’t need to spend a lot. We were able to go a long way with very little.”

Jones himself expanded on his bandmate’s thoughts adding that they certainly emulated some of their respected recording peers. “We are very inspired by the Daptone output and have read interviews with their founders that really motivated us,” he said. “Gabe Roth has said that one of their mantras is ‘Shitty is Pretty’ and we love that.”

“I guess another way to say that is ‘sophisticated lo-fi,’” chimed in Rhein. “We try to use lo-fi in a way that has intention.”

While there is no way this album would sound as good as it does if that weren’t true, Jones revealed a secret of the Indications’ recording process that seemed to betray that “intention” when he admitted to using a piece of equipment in the studio that would shock many tried and true producers. “One of the microphones that I used on this album was an American Idol karaoke machine mic that I stole from my ex-girlfriend’s house.” Chuckling, Rhein explained that the mic “has a ¼” plug on it and most four tracks don’t have XLR so the ¼” eliminates another piece of equipment” but the damage, so to speak, was done.

If anything, the back-and-forth between Rhein and Jones about the recording process showcases a band that is willing to be honest, raw, and experimental. Most bands would have laughed Jones out of the studio when he showed up with the American Idol mic, but these guys not only let him use it on the album, they made it sound great. That is a true testament to the hardworking and grassroots nature of the group.

While the Indications didn’t get together until 2013, they blossomed from the sweat of Charlie Patton’s War, a raucous blues-rock project made up of Rhein along with current bandmates Aaron Frazer, Kyle Houpt, Justin Hubler that had more than cut their teeth on the touring circuit before they crossed paths with Jones. “We played a lot of house shows and came to a musical philosophy that emphasized rawness and energy” said Frazer. “By the time The Indications started we had been playing three and a half years and we’d played our share of empty clubs.  We had honed an approach to live music where we gave 110 percent regardless of how many people were in the crowd.”

The guys also revealed that The Indications was originally intended to be a one-off recording project with a “One Night Only” album release party, but things have changed and Frazer confirmed there is no end in sight. “This band is definitely the focus moving forward,” he said.  “I for one — and I can’t speak for anyone else — have always wanted to be a touring musician.  As we’ve met people on the road we have found that people have really made a connection to this music and that’s what we want to do; connect people, heal people.  That’s what this kind of music is all about.”