Trending Stories from The Marquee
You are at:Home»Cover Story»Aqueous
By Marquee Magazine on June 1, 2018 Cover Story, Features, Interviews, Timothy Dwenger 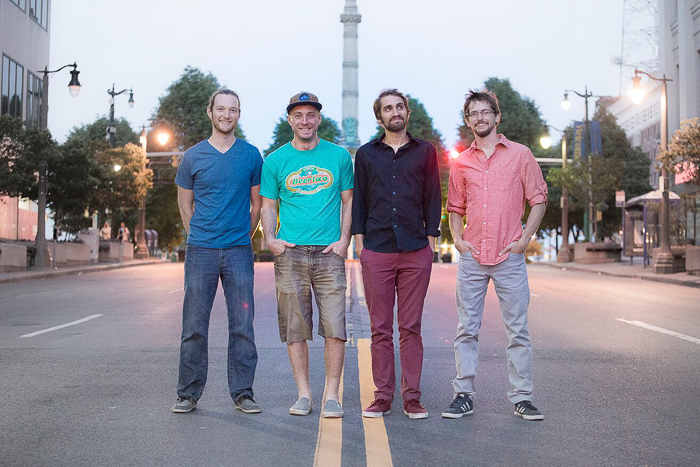 A lot of bands strive to get into a flow, or feel ‘liquid,’ and it is with this knowledge that a group of four kids from Buffalo, New York formed the band that became Aqueous.

“Everything started for us way back in high school,” said guitarist and vocalist Mike Gantzer in a recent conversation with The Marquee as he geared up for the band’s sixth year in a row performing at the Summer Camp Music Festival. “I met these guys in eighth grade or freshman year of high school. We were little Nintendo nerds. We would get together on Friday or Saturday nights and drink beer and play Mario Cart or Mario Party. We were kids being kids but music was probably our most common thread so we started jamming together. It started as a super innocent and fun way to have fun and be in high school and there was never an intent to grow it or have it be ‘something.’ Eventually, over the years, we started to become decently proficient – for being self-taught musicians – and started to develop a style and a sound that was a bit more our own.”

While the four-piece draws heavily on the backbones of funk and rock and roll, Gantzer and his bandmates take pride in their blend of genres which also tap into the wizardry of prog as well as EDM producers.

“There really is a freedom in this whole jam scene,” said Gantzer. “While it’s not necessarily derogatory, I think there can be a lot of baggage associated with the term  ‘jam band.’ For me it’s just the freedom to experiment with any type of music and to improvise. It’s amazing sometimes to me what our fans will be receptive to. If we want to get really heavy in a way that is influenced by a lot of the ’90s rock that I listened to, they’re down. If we want to jam on a hip-hop or trap beat for a little while, they’re in. It’s so cool because I, and all my bandmates, have the widest influences you can imagine. Certainly, not everything we do is for everybody, but it’s cool to feel like you can try those things and not be lambasted for it. It’s very freeing.”

Covering “Fearless” by Pink Floyd Live at the Bluebird Theater:
The full show is also up on Nugs.net: http://bit.ly/AQNugsBluebird
This is a prelude to the Pink Floyd Tribute set the band is scheduled to do with members of Dopapod and moe. at this coming Night Lights Music Festival. Of the upcoming collaboration, Mike Gantzer of Aqueuous shares, “We’ll certainly cover the spectrum of Pink Floyd’s career – there are so many epic eras to choose from and we hope to touch on each of em’ throughout the set. This is a really serious lineup of some of my favorite musicians on the planet – it’s a dream come true for me to play alongside them. It’s always a beautiful feeling to share a mutual love and respect over a certain bands’ music with musicians that you also love; it’s a rare joy to get to perform in this type of setting, especially with such important and incredible music (Pink Floyd) at the forefront. I’m psyched that we’re bringing this to Night Lights.”

That freedom that Gantzer loves has led Aqueous to unleash some monster jams over the past few years. In 2017 alone the band released two compilations entitled Element Pt. I and Pt. II that were comprised of brilliant live tracks captured during the year. Of these 13 tracks, only two clock in under 15 minutes. “This past year, the four of us got into such a comfortable place with each other personally and musically that we started really taking chances and experimenting live,” Gantzer explained. “Most of our composed songs, without any improv, are probably between six and nine minutes, anyway so when you start jamming a little bit, all of a sudden you are at 15 or 20. It adds up quick and every once in a while, we will just go way, way out there if we are catching that vibe and we’ve been enjoying some of that deep improvisation.”

While the peaks they are able to create in their music are euphoria-inducing, Aqueous also come to the party with the patience to allow a jam to fully develop and take on a life of its own. “I think it’s easy when you are young and hungry and out there touring to want to impress people and put on good sets by keeping the energy all the way up and riding the throttle so to speak, but we have been really experimenting a lot with dynamics and I think there is a lot more to be said about a slow build and maybe sometimes not reaching a peak or anything,” he said. “Sometimes there can just be a cool piece of music you create in that moment and then you move on from it. It’s interesting how it can slip away sometimes or turn into something truly beautiful.”

While those beautiful moments have been showing up more and more frequently on stage over the last several years, in 2017 the band was also focused on creating something beautiful in the studio. After more than a year of talking about it, the band has a new record in the can, but it won’t be released until later this year. While Gantzer was tight-lipped about certain details of the forthcoming release, including the title, he did open up a bit about a few things. “We took a different approach this time around and decided to record between touring and to write songs as we went along which couldn’t be more different from how we typically do it,” he revealed. “Often, when we’ll do a studio project, there will be songs that we’ve already played out and we’ll whittle them down to just the song – create versions that fit the studio best – and then have a week and a half to go and record the whole thing and get everything done in that little chunk of time. We’d just cram it in and go back out on the road. This time we wanted to try something new and change up the formula and we are all very stoked on the result. I think we were able to get more in touch with the purpose of a song and writing a good song that really stands on its own without any of the aspects of the live show that people think of us for. There isn’t any improv on the album. It’s just a batch of what we hope are really great songs. We are really digging what we did and we have a huge headlining tour planned for the fall, so the plan is to release it leading up to that and then tour behind it.”