Trending Stories from The Marquee
You are at:Home»Features»Interstate Stash Express
By Marquee Magazine on June 1, 2018 Features, Interviews, Sarah Baranauskas 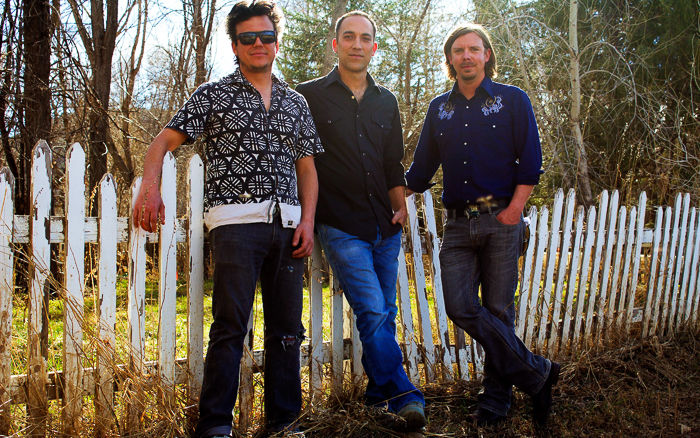 In the middle of the night on September 11, 2013, Interstate Stash Express frontman and guitarist Terry Kishiyama and his wife, carrying their five-year-old son and one-year-old daughter, hiked up to their neighbors house on higher ground as the North St. Vrain River continued to rise. After hours of heavy rain, the usually peaceful river had grown to a deafening roar and was crashing over the bridge that connected the Kishiyama’s home to the only road out of the canyon. Kishiyama fell asleep later at his neighbor’s house, hopefully thinking the river would calm and the family could return the next day.

“I wake up in the morning, step outside and the river is blowing up,” Kishiyama described. Along with ISE drummer Thom McKee and bassist James Smith, he chatted with The Marquee on McKee’s back porch in Niwot, Colo. on a lazy summer evening, a stark contrast to the chaotic scene he described. “The river was halfway up the front door of the house across the river and there was a propane tank floating by, hissing really loudly. Yet we were still thinking, ‘We’ll be cool. The river will go down and then we can go home.’ But then our bridge exploded and the trees on the banks began to fall.”

Four days later, Kishiyama and his neighbors were picked up by rescue helicopters. The next day, sitting with the growing uncertainty of when they might be able to return to their home, and what might be left to return to, he began writing Evacuee. This would eventually become the title track on Interstate Stash Express’ new album, but, at the time, it was simply therapy. Music would be the method for Kishiyama to both process his emotions and soundtrack the three-and-a-half year saga that awaited the family post-flood.

“This whole record is about that journey of not knowing if I can go home,” he explained. “It wasn’t conscious, like, ‘Hey, the flood happened, I’m going to write a record about it!’ Music was just a big part of that journey, so the record happened naturally. I think these guys understood music is my therapy. So we would just get together and jam. I was a hurting dude, especially as the months went by and then we hit year two and still weren’t home.”

“Terry brought us these glimpses of his situation through the music,” McKee continued. “He’s always allowed us the freedom to contribute and write our parts, but with this record he went wholeheartedly into the mixing and overdubbing of the guitars and vocals. That was him being inspired and taking it where only he could. So a lot of stuff we normally collaborate on, Terry just rolled with it and that’s why it sounds the way it sounds. It’s his experience. We only tapped into a little bit of that. But we are all good enough friends that have known each other long enough that it wasn’t even a band thing first. It was our friends going through some serious shit and we were just like, ‘How do we help them?’”

From these uncertain years emerges Evacuee, a record that sees the ever-exploratory — but always hard rocking — power trio ISE paint a scenic picture of the Kishiyama family story in all it’s hopeful peaks and shadowy despair, as melodic psychedelia mingles with growling guitars that wouldn’t be out of place on an old Black Sabbath record. The nine tracks tie tightly together, the result of nearly two years of the band workshopping the tunes before hitting the studio.

Three years and four months later, as 2016 rolled into 2017, the family had stopped waiting for the bureaucratic red tape and built a footbridge to travel between the river and road so they could move back in. Until the driveway bridge was constructed in June of 2017, the family spent a few months shuttling kids, groceries and trash across the footbridge. Similarly, while ISE laid rhythm tracks during a one-shot marathon ten-hour session at World Famous Studios in Denver, Kishiyama took time at Violet Recording in Boulder to lay down the rest of the tracks over a period of several weeks. Kishiyama booked the initial studio right around the time he and his family were finally approved for a grant to build their bridge. “It was like the state of my journey to get home was directly related to where we were at with finishing this record,” he reflected. “I didn’t finish it until we were home.”

Perhaps no song captures the timeline of the Kishiyama family’s post flood story better than “Only Nine.” “Only Nine” was originally “Only Five,” as the words were originally written by Kaion, Terry’s son, when he was five. Each year a verse was added and since Kaion was five when the flood happened, the final recording ended up finishing with a verse from nine-year-old Kaion.

“It grew with him. And so the last verse was just, ‘By the time that I was nine I wrote this song with my dad.’ He changed a couple words, once he knew that we were going to record it.” Kishiyama chuckled as he related, “Now, of course, he hears it and rolls his eyes. But I think someday he will think it’s awesome.”

The album closes with “The Veil,” which sounds like a Hendrix deep cut and explores the theme of acceptance and renewal. As Kishiyama put it, “It’s all about the very last line: ‘Let it rain/Let it pour.’ Just bring it.” The song leads listeners out with a banjo outro, rolling over the hiss of the river as it flows under the new bridge at the Kishiyamas’ house.

“After this experience [of the flood], there you are,” Kishiyama reflected. “What’s changed? You’re on your front porch, you’re playing the banjo. Everything’s fine. Whats next? That was kind of a fucked up four years.”
“It was like the place that brought Terry so much destruction also brought him peace in the end,” McKee said.

ISE will host an Evacuee release party at the Oak Room at Oskar Blues Brewery in Longmont. The first set will see the band performing the new album in its entirety, followed by a “ripper” second set. A free trolley will be running from Oskar Blues in Lyons to Longmont. Lyons songwriter Danny Shafer and Boulder-based folk rockers Famous Men will open. It will be a celebration of a new ISE album and a way to mark the end of a tumultuous chapter of Kishiyama’s life.

“Now that it’s over, I honestly don’t want to sing these songs all the time, because there’s a little bit of pain there,” Kishiyama admits. “But now it’s just art. It’s not life anymore.”