Trending Stories from The Marquee
You are at:Home»Album Reviews»Khemmis ‘Desolation’
By Marquee Magazine on June 1, 2018 Album Reviews 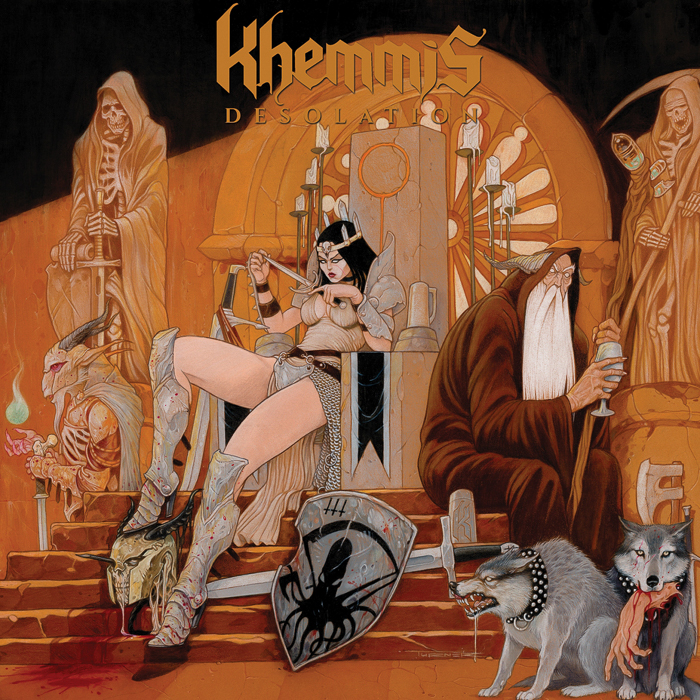 When their 2016 sophomore album Hunted was named “Album of the Year” by Decibel Magazine, it did more than count as a win for Denver doom lords Khemmis. It counted as a victory for the entire Mile High metal scene, as the honorable nod shined a light so bright on Khemmis that any band close to them also received notice. Even the venerable Vice outlet Noisey ended up doing a whole piece on Denver’s doom scene.

But more than even that, Hunted rekindled an excitement for brainy, almost studious metal that coupled Maiden-like riffage with academic precision and a willingness to blend intelligent, story-driven lyrics with loud and heavy.

For their third album Desolation, due June 22 on 20 Buck Spin, Khemmis, which just wrapped up the Decibel Magazine Tour and a European tour, take their freshman and sophomore studies and elevate them to an upper-level class dissertation on the evolution of modern metal.

With the “stadium-sized” opening notes of “Bloodletting,” they acknowledge the roots of their genre — the sludgy stoner rock, and early metal that gave them their foundation — but they quickly take that foundation and build multiple stories upon stories to form their own cathedral of sound.

Lead vocalist/guitarist Phil Pendergast once joked that he is a soul singer stuck in a metal band, and his powerful, soaring vocals again sit clearly over the ample riffage on Desolation. Working for the third time with Dave Otero at Flatline Audio in Denver, the arrangements on their third album are spectacularly produced, without ever sounding over-done — there’s breathing room for Pendergast’s vocals, space for he and fellow guitarist Ben Hutcherson’s insane fretwork and the bottom-end of the rhythm section never gets muddy, even when trouncing through the record’s sludgiest of tracks.

Desolation, which again has artwork provided by illustrator Sam Turner, may only have six tracks, but the shortest song, “Isolation” is just under five minutes, and in typical Khemmis fashion the album ends with an epic tale, “From Ruin,” which clocks in at nearly nine and a half minutes.

The record doesn’t make any vast departures, or throw any curve balls that will alienate early fans. Instead, it takes the Khemmis hallmark of expansive, smart metal and continues to aggrandize their entire genre and fanbase through deeply written and carefully arranged metal that is as cathartic as it is soulful.