Trending Stories from The Marquee
You are at:Home»Cover Story»Nightmares on Wax
By Marquee Magazine on June 1, 2018 Cover Story, Features, Interviews, Michael Chary

Nightmares on Wax, nearly three decades in, is waking up the consciousness that will Shape The Future 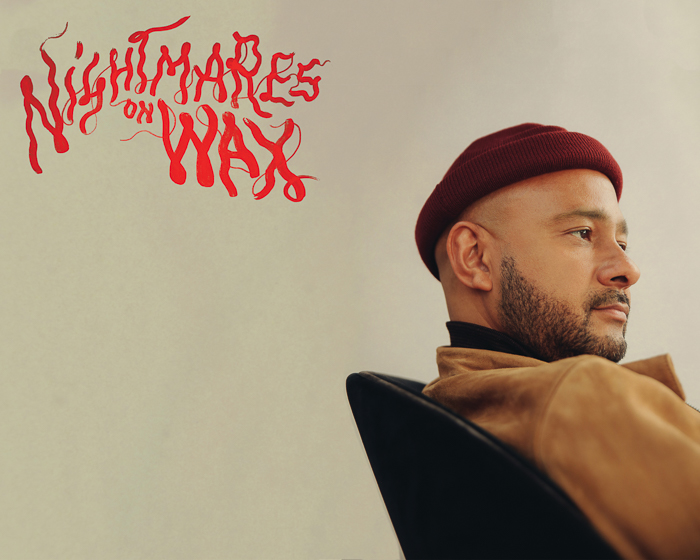 Dubbed one of the most influential artists of a generation, George Evelyn, a.k.a. Nightmares on Wax, a.k.a. DJ E.A.S.E. began pioneering the chillout, trip-hop genre he’s become so distinguished for, long before the phrase “EDM” ever came into fashion.

As Warp’s longest-serving active member, Evelyn has broadened the sound of the label and paved the way for a litany of artists over the last three decades.

In Leeds, England in the mid ’80s when Evelyn began to DJ and produce music, his first instinct was to begin sampling — admittedly not really knowing that’s what it was called — as he would take chopped up bits and pieces to improvisationally throw into DJ sets. Eventually, he realized his art had legs and linked up with a friend who owned turntables, a double cassette player and a reel-to-reel — and the evolving concept of Nightmares on Wax was born.

But now, nearly 30 years after he started making music, in a short attention span culture, where relevance is measured in milliseconds of changing opinions, Evelyn continues to carry the torch into an era where his pedigree has come to influence nearly every facet of popular music, and resonates with a generation that wasn’t even born when EDM climbed out of the primordial stew of hip-hop, soul, dub, and funk.

“I’ve been blown away more than anything at how young the crowds are,” Evelyn told The Marquee during a recent interview. “Sometimes you think, ‘This should be an older crowd,’ but often I’m totally wrong. But my music is open to everybody, there’s not any specific era it appeals to and I stay current with what’s going on. I also think the younger audience has a wider spectrum of music to pull from — why can’t people be into a million or more things? It allows artists like me to be able to work in new places.”

This month, specifically those new places mean being all over the explosive Colorado electronic scene. Nightmares On Wax is performing at Bassnectar’s Freestyle Sessions Summer Gathering at the 1stBank Center early this month and later co-headlining Sonic Bloom for a full live band performance accompanied by a drummer and vocalists and what he calls a unique and intimate stage set up which features a blend of longtime favorites and future classics.

Having withstood the test of three decades of recording and performing and transcending a multitude of genres, sub-genres and spin-offs in electronic, hip-hop and everywhere in between, Nightmares On Wax has seen a ton of changes over the years, to say the least. But at a time when he could kick back on his adopted island home of Ibiza, off the coast of Spain, and carefully count his 15,000-plus vinyl collection, Evelyn is as prolific as ever.

His latest album Shape The Future, was released in January, and a forthcoming remix release of “Deep Shadows” featuring Sadie Walker will drop in mid-July. On Shape The Future Evelyn took the underground soul classic “Deep Shadows,” originally recorded in 1967 by Detroit’s Little Ann and reworked it to a stripped-back, wound-down club R&B sound.

“In the final stages of recording Shape The Future I expressed how much I needed some female energy injected,” he said. “I had an idea to cover an old reggae song that Sadie would be perfect for. I then heard the original ‘Deep Shadows’ by Little Ann and instantly connected with it. The track is an insight into the undenying effect love has, regardless of the exterior resistance to understand it”.

Energized by globetrotting runs of studio sessions and DJ sets, Evelyn’s salvo is a masterpiece of contemporary and classic genre-blending that solidifies Nightmares On Wax’s place as an inspirational electronic music figurehead. This includes the shamanistic vocals of the single “Back To Nature,” and the arresting voices of Mozez alongside Kanye West and Flume collaborator Allan Kingdom, as featured on “Citizen Kane.”

Coming up in an age when house was king, Evelyn had undoubted foresight, whether he knew it or not. “Hip-hop has always been the background of what I do,” Evelyn said. “The house scene now, I think is a reinterpretation of what we were doing and it’s opened the door for me to bring my representation of it and the foundations I was brought up on. It allows me to manipulate that more, that’s the one good thing about it, I’m able to cross a lot of elements. But when hip-hop came along it was a cultural movement, and I don’t think anything has swept me away like it since. There’s always an essence of that in my production.”

In those early days of the ’80s U.K. house scene, Evelyn says he felt like he was part of a movement, drawing a comparison to the music revolution of the ’60s, and saying he had that epiphany while ‘tripping my head off’ — apropos. But even with the guiding light of visionary psychedelic explorations, Evelyn said the balance lies in finding the happy medium between his newer material and the tracks that gave him his name. “The challenge is what not to play. It’s never a case of maybe we need this or that — obviously I’ve got a wealth of music — the most difficult thing is deconstructing an album you just made while also incorporating the classics,” Evelyn said. “Sometimes there’s the odd chance you get to play longer on stage and bring a couple surprise gems, and I’ve always thought it important to have a show that incorporates the old catalog, but also delivers the new.”

As he approaches the three-decade mark of his career, Evelyn said he’s inspired and feels the same optimistic wonder today that he and his cohorts felt when they first convened in the ’80s and drew parallels to the counterculture of the ’60s. “It’s always changing, the only difference is we were part of the wave of something that was totally brand new. But you know, it could be the same for a 16 or 17-year-old person going out this weekend and having the best time of their life wherever they are. It’s all about perception. For us the biggest thing was being creatively involved, it was exploration in a way, it was something new and we didn’t know what it was, but we were just enjoying it.”

And he added that those perceptions and elevated thinking may work in tandem with music to spark a much-needed revolution on multiple levels. “I think there definitely is [a revolution coming], but it’s not just based on music,” Evelyn said. “On the consciousness level, there’s a shift that we’re all becoming aware of the nonsense that’s going on. It’s always been there, but now most are just waking up to it, so it looks really bad.”