Trending Stories from The Marquee
You are at:Home»Cover Story»Itchy-O
By Marquee Magazine on August 1, 2018 Cover Story, Features, Interviews, Sarah Baranauskas 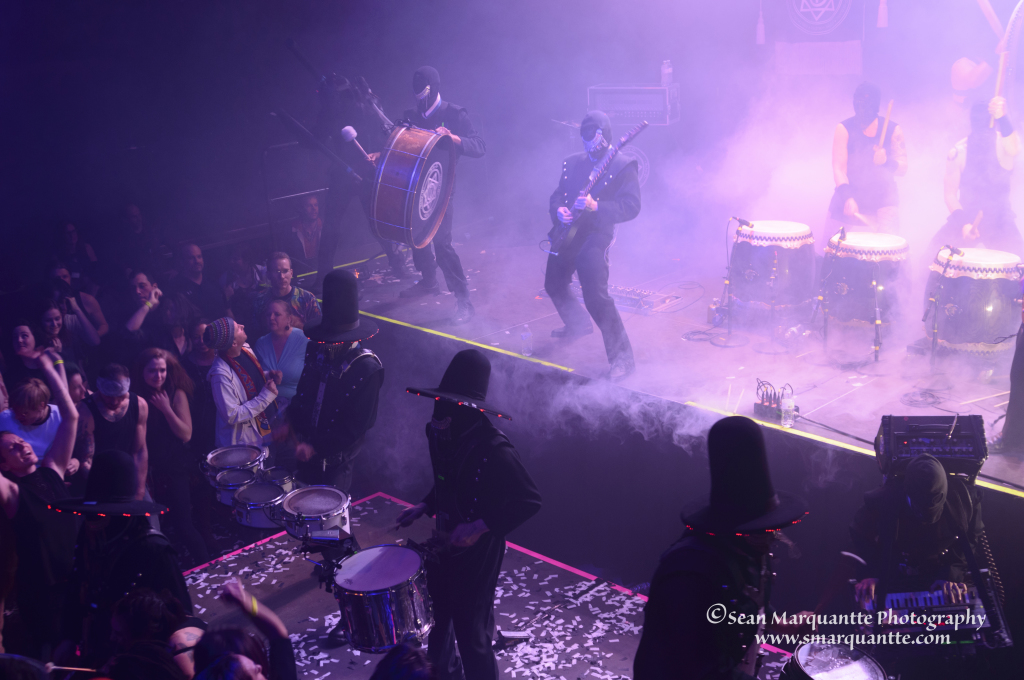 “The aim has always been a spiritual experience, which has evolved over the years, for the audience and ourselves,” Itchy-O said collectively, explaining their underlying ethos. “Our audiences might be better positioned to define what exactly happens at our shows, though. Really, we’d just like to quote one of our inspirations, David Lynch, and say, ‘Mystery provides a beautiful corridor.’”

Mystery is certainly key to Itchy-O, Denver’s own astoundingly large 50-member-plus percussive and electronic musical collective, whose wild, immersive shows completely tear down the walls between performer and audience, stage and dance floor. For example, there are few interviews where the band answers as a collective in the interest of keeping their individual identities secret. But in an era of ego-driven individualism, where even the most intimate personal details of our lives are ripe for peacocking on social media, there’s something refreshingly genuine and artistically rebellious about a commitment to collectivism, community, and anonymity.

Besides providing a novel countercurrent, as experimental art has always done, Itchy-O drinks from a deep well of artistic influences. As they beautifully put it, “In an attempt to blur the lines of origin and expose timeless and mystic archetypes we draw inspiration from all sorts of sources and disciplines – Japanese Taiko drumming, Chinese Lion dancing, Mexican street processions, ancient esoteric symbolism, French mime-clowning techniques, Western drum corps, to name a few. We are also deeply influenced and moved by the visual vocabulary and shamanistic psycho-magic of Alejandro Jodorowsky, the archeology of Sir James G. Frazier, the Master Musicians of Joujouka, J.G. Thirwell, Talking Heads, Einstürzende Neubauten, DEVO, the Residents, and the immersive performance group Crash Worship.”

But more than an esoteric list of artistic influences, Itchy-O also pointed geographically to the Mile High City itself as one of the reasons the collective can even exist. Denver’s music scene is fertile ground for subversive art in and of itself, as the band described. “Obviously, Itchy-O is a big, big group with over 50 active members, most of whom are located here in Denver. We all pinch ourselves on a regular basis that this thing exists and we doubt very much — even with members from San Francisco, New York, Austin, and other artistic-power-hubs —we doubt that this phenomenon of a performance troupe could happen anywhere else.”

With a band known for their live performances, the studio provides an opportunity to immerse listeners in the sonic landscape of Itchy-O, an experience which stands alone in its own right as latest album Mystic Spy | Psykho Dojo demonstrates. A dual concept album, the band unpacked the themes at play on the record, albeit in their enigmatic fashion.

“The Mystic Spy theme is about a kind of spiritual espionage and a race that two sects or tribes might have to obtain supernatural power. A race where alchemy, magic, and trickery are unstoppable vehicles in themselves. The Psykho Dojo theme is a celestial realm where things are more … unmovable. Ominous but harmonious at the same time. A strange alien world, deep and contemplative, where there are not many options outside of surrender.”

The album also marks a more sophisticated approach to musical arrangement than previous Itchy-O efforts. There’s a palpable cinematic feel and a decidedly exploratory scope to the songs on this record, as Mystic Spy | Psykho Dojo features some of the longest songs the band has put down to date. Adding to this imaginative, big-as-the-cosmos vibe, are snippets of recordings from the Voyager space probe which are utilized on the album. “There is something deeply profound that happens if you think about where these recordings came from,” Itchy-O said. “The sounds were produced by magnetic frequencies and the space plasma that surrounded the Voyager probe while it orbited several planets on its journey in deep space. They really are magnificent and awe-inspiring… and they [the recordings]are also public domain.”

The Dojo side also offered the band a chance to, “[S]hine a light on our extremely talented taiko drummers,” they said. “[We] marry [their drumming]with our distinct electronic instrumentation. This side/theme gives the sort of deep reverence, honor, and discipline that comes from dojo drumming- a faction of taiko drumming that elicits extreme physical stamina, mental focus, and hive-mindedness.”

The album also offers a chance for fans to create their own music, once again staying true to the Itchy-O m.o. of dissolving the boundaries between consumers and creators. “There are fourteen, 32-second noise pieces that end in lockgrooves on the [vinyl]record (seven at the end of either side) and we are working on ways of incorporating these into the live set,” they explained. “But folks that don’t have record players will also have the option of accessing a digital version of the lockgrooves online, where they can layer and record their own personal versions and download them as their own ‘Itchy-O” songs. Access for this site will come with a ‘download zine’ we are publishing and slinging at the merch table.”

To celebrate the album’s release, Itchy-O will take over (and “take over” is a more accurate description than “take the stage”) at the Gothic on August 11. “We like looking at [a show]like a heist or organized crime,” Itchy-O mused. “Every show we do, especially on our home turf, is different.”

“This show will be different, for sure,” they continued. “We can tell you that. We’ll be playing a bunch of our new material but we’ll also be delivering ‘the goods.’ We’ll be boiling our veterans in new fresh material and for the newcomer… oh boy! They are really what it is all about… nothing beats the expressions and feedback we get from our first-time virgins.”