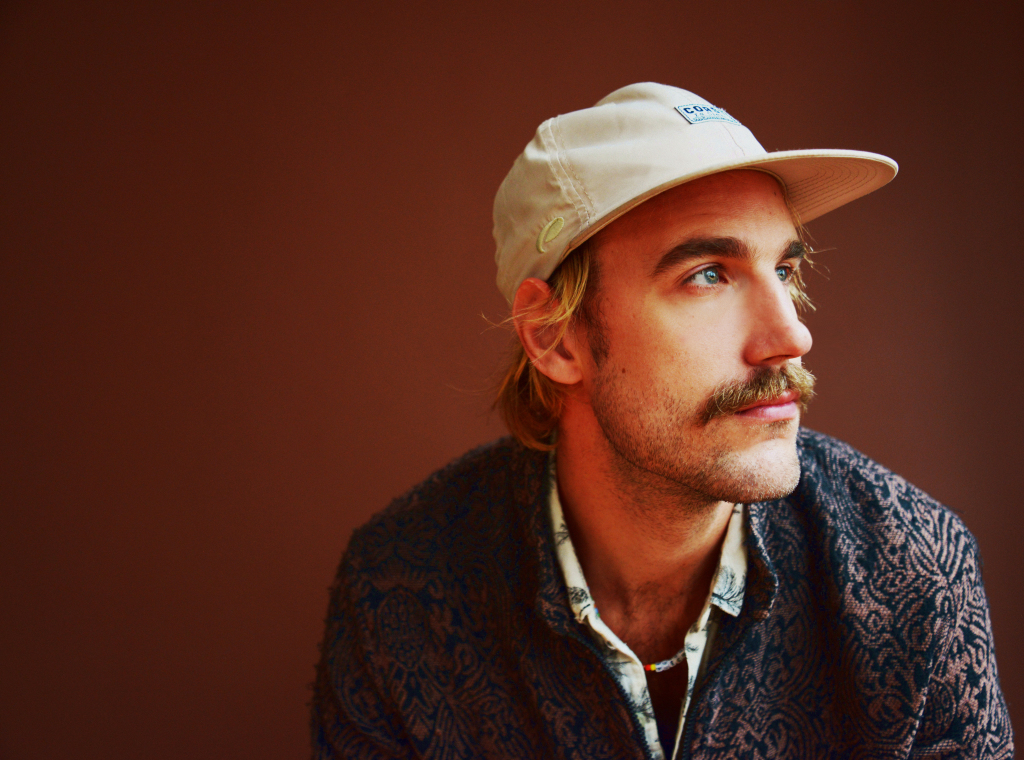 From Henry David Thoreau to Edward Abbey, isolation by choice has been the breeding ground for some of the most profound writing, thinking and ultimately art, that the world has ever known. Couple that with a disintegrating world order and shifting moral compass, and what develops is a fertile breeding ground for the most creative output by great minds in our midst.

In late 2016, early 2017, when the country and the world began hiccupping into today’s current disarray, musician and songwriter Rayland Baxter chose to isolate himself in a recording studio in the cornfields of Kentucky with nothing but a guitar, a Wurlitzer keyboard, and a stack of notebooks. “I was on a quest to be left to my own mind and the silence or whatever it was that came around,” Baxter said from the back of a cab in New York City as he made his way to a show at Rough Trade Records just days before his new record Wide Awake hit the street. “All my favorite writers got to go and be by themselves and write and so I wanted to do that. I didn’t know going up to Thunder Sound [studio]that it was going to be there, but it was there and I got it all done. I was functioning at a high-efficiency rate up there and I just wrote and wrote all day and into the night.”

The world that Baxter created for himself inside the old converted factory reads like something out of a horror movie, but it was, in fact, a haven that fed his creative drive. “It’s an old building; there are lots of dark places and most of the days and nights I was there by myself and it got kinda creepy,” he admitted. “I was in this room with the windows blanketed, scribbled notes everywhere and the TV in the kitchen was always on the news station. I was always overhearing the shit that was going down in the country. It was right when the Cubs won the World Series, when Trump got elected, and it was one of the times when there were major shootings going on. So, I’m in this little room in the middle of the cornfields, overhearing the news, and overhearing my own consciousness scratch and claw at my mouth to try and get these things out. I loved the seclusion and something was very magical and very proper about me being in that studio and being able to write like that. It was the first time that I was a true writer.”

When he had cleared his head and stumbled back into the world after three months in the belly of the studio, he had piles of notebooks crammed with more than 50 new songs. While he handpicked fifteen to record for Wide Awake, ten of them made the final cut. It was songs like “79 Shiny Revolvers” and the opening track, “Strange American Dream,” that led NPR Music to call the Butch Walker produced album “perfection…a huge leap [that]dips into the rich tradition of witty, sonically complex pop,” while the New York Times said “79 Shiny Revolvers” is a “Paul McCartney-style ballad with a plush, full-scale orchestral buildup.”

“My favorite songs end up tricking people into singing along with something they might not even understand at the time. When I sing ‘Blow them away, the American way’ I’m not singing about some toy guns, I’m singing about the real shit that’s killing people,” he said passionately. “I’ve watched all these shootings happening. It’s absurd. Let’s go fucking blow them up, let’s go blow them away the American way. That’s what we are known for from the beginning of this country. One-hundred and seventy years after this country was founded we’re dropping huge bombs on helpless people. That’s just fucking weird.”

From his debut Feathers and Fishhooks to his brilliant sophomore release Imaginary Man to the defiantly thought-provoking Wide Awake, Baxter is steadily building a catalog that betrays a Young-ian or Dylan-esque ability to write indelible hooks that don’t stray into the realm of saccharine or contrived.

“A good song is one where there’s no hitting the nail on the head at all,” he said. “With ‘Strange American Dream’ I see so much greed and so much selfishness and so many people storing their nuts and not sharing their nuts or storing their gold and not giving it away. What sense we all make of our existence is to each their own but I know that me and all my friends have a certain outlook on life and a certain outlook on possessions and to us being selfless is the ultimate goal and the most rewarding part of being a human being. Moments of selflessness — whether that is letting someone get in front of you in highway traffic or donating your time to a greater cause other than yourself — those are the kinds of moments of realization that occurred to me while I was writing that song. We are all wired up, all caffeined, coked, or Adderalled up, plugged into the wall and looking at our phones with cameras taking pictures here, there and everywhere. It isn’t anything like I thought it would be when I was a kid drawing dinosaurs in my room on construction paper and thinking I wanted to be a firefighter. Now I’m a musician with a voice which is a powerful thing to hold.”

While it’s clear that Baxter has some issues with the current state of our world, he’s also realistic about what got us here and what we can do as individuals to try and right the course and he’s using his voice to spread the word. “We live on a mountain of past decision of individuals, races, and countries, and you can’t go back in time. Integrity is really important and to be an American stands for a lot of really beautiful things, but right now we are prodding at the world and none of the people that I enjoy sharing time with are prodders — that aggressive and evil type of prodder. So we are all like ‘what the fuck?’” he said. “So the thing you have to do is continue to be a good person, continue to be selfless as much as you can and help the greater cause. While some say this is way easier said than done, it’s straight up simple and easy to be a good person: Pick up a piece of trash when you are walking and throw it in the trash can, or protect your neighbor. That’s what’s important. It’s not making money. It’s not being rich, and it’s not having things. When someone asks about another person, the dream and the goal should be to get the response of ‘that person is a very good person’ and the more that happens, the more I see the beautiful world that we live in and not the bugs that are splattered on our windshield that prevent us from seeing a beautiful sunrise and beautiful sunset as an absolute miracle. The little epiphanies, the little holy shit moments that we have where we are like ‘oh my gosh, the Earth is this massive sphere spinning around the sun just like inside atoms there are neutrons and electrons spinning around the nucleus.’ It’s the same thing. Or a tree and our lungs being co-dependent on one another and looking the same. I’m always trying to find the connections to everything and anything so that I can stay sane and realize that it’s a gift to be a human being.”