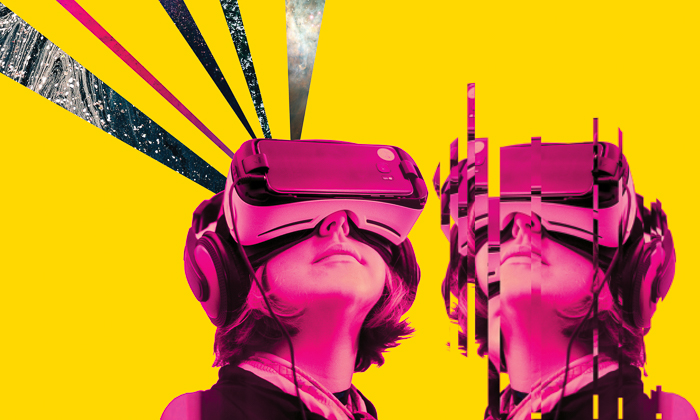 When the modern Swedish philosopher Nick Bostrom proposed the ‘Simulation Hypothesis’ it struck a chord in the minds of our silicon-valued society. Today, technological obsessions shape our worldview in almost every way, but sometimes we need a reminder to take a step back and disconnect from the mainframe. And that may be why Ghostland Observatory has been largely absent from the music scene for almost a decade.

“That’s where you’re catching me,” Aaron Behrens told The Marquee in a recent interview. “You’re catching me at this interesting spot of coming out of a dark point and that’s kind of where See You Later Simulator is coming from. It’s like this person coming out of the incubator — the whole Neo being released from the Matrix-type thing.”

And whether or not you ascribe to Bostrom, or for that matter Elon Musk’s musings about our one-in-billions chance of living in ‘base reality,’ one could easily envision the music industry as feeling very much like a fabricated existence. The money, the fame, the adulation — it’s sexy, it’s warm, it’s comfortable, but is it real?

“Sometimes it ain’t about the money, and sometimes it ain’t about the glory,” croons Behrens on Ghostland’s latest album. A sober and self-effacing admission from the lead singer of a band defined by a glamorous and stimulating aesthetic; a band that headlined Red Rocks and effortlessly sold-out national tours. But Behrens and his GLO-co-conspirator Thomas Ross Turner, sensed when the simulation was devouring base reality; they realized it was time to unplug. That’s when GLO disbanded for the better part of eight years. Halfway through their epoch of disconnection, an attempt was made to reunite with the Life of the Party EP, but the timing wasn’t right, nor was their dynamic.

“To me during that middle part it was like, ‘you can do this,’ and it started connecting us back. But in between, I didn’t really hear what Thomas was up to and I don’t think he heard what I was up to,” Behrens said. “We would kind of check in with each other, but I know now once he’s excited about it and once he has his vision, which he does now — man, his production — I think he was doing nothing but sharpening his knives during that time off.”

During that time Behrens pursued his own project, Midnight Stroll — a thoroughly modest career move, which saw him chop off his trademarked pigtail locks and return to his more moody, melancholy pedigree in country-rock. Turner, on the other hand, continued with the momentum that Ghostland Observatory’s perpetual touring had generated, albeit with a liberating, no-pressure approach.

“We toured for like eight to 10 years straight and it didn’t stop,” Turner said. “So, when Aaron was like ‘man, I need a break, I can’t do this anymore,’ I was kind of left still in that mode of ‘Ok, next month we’re gonna start doing shows’ and it kind of took a while for it to sink in, like, ‘Wow, we’re not doing shows anymore. What do you do?”

Turner returned to his roots as well, immersing himself in music, without feeling as though he had to create it for other people.

“I took a step back for a while and tried to appreciate new people making electronic music and also got back into the things that used to really turn me on; the things that made me want to make music in the first place,” Turner said. “I started to enjoy it from the standpoint of just making music without the pressure of having to put it out or start touring. I’m gonna make music to sharpen my gear because I used to make music for hours and hours with no one but myself and maybe one friend listening, and that was so much fun for me. So I tried to get back to that feeling. I wanted to be in that place where I felt joy like I did before we started.”

Behrens took a different route, opting to make music with Jonas Wilson, an Austin-based producer known for his work with other well-known artists, including Lou Lou of Thievery Corporation. And though Behrens continued to tour, the glamour and sold out shows became a thing of the past.

“Oh wow, it was humbling, to say the least. But dude, I’m always gonna be writing. It doesn’t matter if it’s with Ghostland or not, I have to write.” Behrens said. “It’s the thing I have to do to get me through life. So, for me, it was a big change because, hell, you go from laser light show craziness to playing to two people at some bar in the middle of nowhere. But at the same time, it proved to me ‘this is who you are,’ no matter what form or place you put me in, I’m always gonna be doing something.”

“And you know I’m sure people didn’t understand it in the beginning, but when you see an artist doing something they’re successful at, compared to seeing them do something from a different angle, you’re not seeing what that artist is really capable of just by one group they’re in. I think for some people it was kind of hard to swallow, but for me, it was such a freeing thing; something I had to prove to myself you know?”

Aside from what sounds like a much-needed break for the sake of mental, emotional and spiritual sanity, it seems their hiatus provided just enough perspective and the right amount of analog grounding to remind themselves what was so special about GLO in the first place.

“We really wore ourselves out and that made us not know for a while what was going to happen, or whether Ghostland was going to come back,” Behrens said. “But man, we hung on long enough and saw each other just enough so that when we started playing more shows it just ignited this whole fire. And now it’s like starting over again; we’re happy, we’re excited, we’re pumped. I’m already ready to start working on the next record, and we haven’t even released this one. So, it’s this rejuvenation. I’m so happy that it came back, I didn’t know if it would and I’m just so happy it did.”