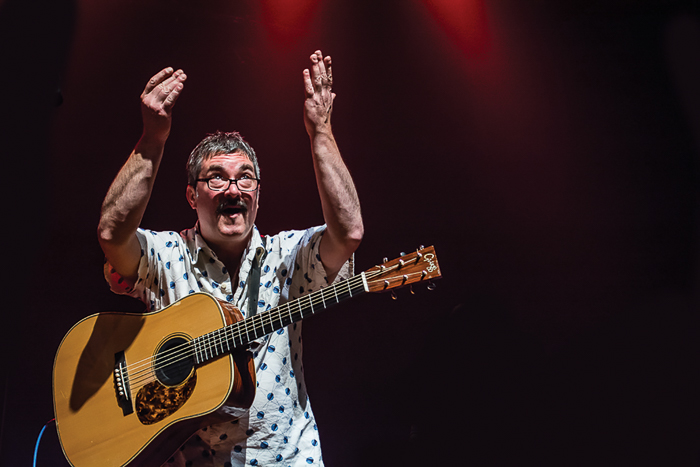 “I like people to let me take their troubles away for a couple hours when they come to a show,” Larry Keel said, joining The Marquee on the phone from his home in Lexington, Virginia. We were discussing the different roles artists play in society during particularly tumultuous periods. “Instead of just spewing about this or that — I feel like, at the end of the day, that doesn’t help — you just have to try to be positive as you can and transform that into music. That’s how I feel I can be the best for everybody. ”

A renowned flatpicking guitarist and songwriter, Keel has found plenty of opportunities in the roughly four decades he’s been playing music to help ease those troubles. Growing up in Manassas, Virginia in the early ‘70s,  Keel recalled going to various social functions and potlucks at farms and fire halls where he would watch his father, a banjo player, and older brother, a guitarist, play with other local musicians: “I loved to sit around the hall and take in the whole scene. That’s a great way to be brought up. I’m very grateful for it.”

When Keel was seven, his older brother gave him his first guitar. By the next year, he was joining in the sessions at community events. It was the beginning of a journey that is constantly evolving for Keel — and constantly providing new writing inspiration.

“My songs are based on my life experiences,” Keel explained. “People I meet, places I go. The folklore of [Virginia] and different places I’ve spent time in. I don’t write every day now but I put out new songs every two or three weeks. I take my time these days crafting the song into what I want it to be and don’t just go with the first impulse I have about writing. I rewrite and study my chord progressions, and try and create something different with each new song.”

His own family’s history also provides a wealth of songwriting source material.

“My granddaddy was a moonshiner and raised a bunch of children selling moonshine to the government,” Keel described. “That was deep in the hills of Virginia. There wasn’t much work except coal mines. People still make moonshine there to this day, it’s sort of a counterculture. I don’t drink it anymore but I’ve had my fair share — I’ll put it that way. But since I write so many songs about that culture, people come up to me at shows and want to share some of their handiwork. I will still take a little sip to share my appreciation.”

In September, The Larry Keel Experience will hit Colorado. Featuring Keel, his wife Jenny on bass and Jared Pool on mandolin, the group not only showcases Keel’s songs but also high energy picking, creating exhilarating rock and roll explorations lighting off from bluegrass and americana grounds. This has been a particularly high watermark era for LKE, currently being captured on a live album project tentatively set for a release around the new year. “The current Larry Keel Experience is evolving into a whole new sound compared to what I’ve had in the past,” Keel reflected. “We want to document that because it seems like everybody really loves our live show right now.”

Recent years have seen other peak experiences for Keel. Last March, he joined his friend Stephane Wrembel, a guitarist and expert on Django Reinhardt, as well as a select group of other virtuosos, for the first Django A GoGo concert. Keel described the phone call when Wremble asked him to join the lineup for this Reinhardt celebration: “Out of the blue one morning he calls: ‘Larry you want to play a little place with me? I’m going to a do a tribute to Django Reinhardt.’ I said, ‘Sure.’ He said, ‘A little place called Carnegie Hall.’

“I was totally honored to be asked,” Keel said. “I’m a bluegrasser and rocker, so to sit down and play Django’s music with him and Al Di Meola and Stochelo Rosenburg — we’re talking some of the greatest guitar players of all time — I had to brush up and do my homework. And practice, practice, practice, of course.”

Heading into Carnegie Hall before most of the other performers on the day of the show, Keel describes that day with a palpable sense of wonder: “It was just amazing looking around and thinking about who had stood on that stage, like Tchaikovsky and Martin Luther King, Jr. It was truly humbling. I was just waiting around with another fellow and I asked, ‘Would it bother anybody if I sit on the stage for a little bit since nobody’s here?’ I got to sit out on the stage for about an hour, just playing and listening to the sound of my guitar in this amazing room. It was one of the most special experiences I’ve ever had playing music.”

Whether it’s Carnegie Hall, a sweaty ski town club with LKE, or a festival slot with Keller & The Keels, Keel brings a zen mindset to the stage — similar to the mindset he finds in his other passion, fishing.

“I try to really relax because some of our music has more aggressive playing,” he explained. “I want to see people fired up. If I stay good and relaxed and just watch the crowd while I’m playing, I can see the heads move a certain way and see the rhythm form. It takes us all — the audience and myself — to create that very special thing where everyone is in one place locking on to the same idea. It’s a very spiritual thing to me when that happens, when we are all making that feeling, that sound and that magic together.”