Thievery Corporation evoke woke with Treasures From The Temple 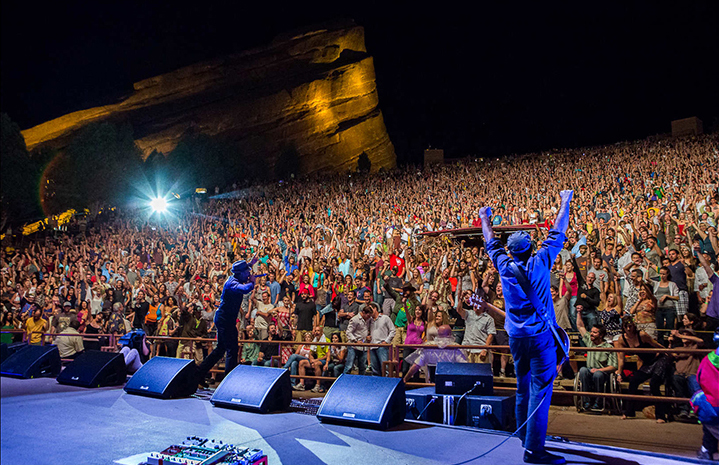 Eclectic is a word typically used to describe music in a positive light, but that’s not to say it can’t be done carelessly or distastefully, spawning some weird hybrid no one ever wanted to consider.

So when a band is able to successfully explore a confluence of genres and find the points of overlap in their evolution, it’s all the more impressive. But once you get to a point of cultivating that diversity it makes sense to get back to your roots and show your fans how much you truly know about the genres that define you.

This is exactly what Thievery Corporation has done with the last three albums of their extensive and varied discography, showing their audience just how well-versed they are in the dub atmospheres and bass lines that they have, if you will, dubbed as their baseline.

“I think when people think of electronic music, they don’t always understand that Jamaica had a big influence in terms of mixing, effects and getting those low, dubby bass tones,” Thievery Corporation’s Rob Garza told The Marquee in a recent interview. “And for us it’s always been a big part of our sound. With dub music, I think it creates a lot of space and you can really get into tweaking effects, melodies and echo-out vocals. It’s influenced us very much like bossa nova has because that’s another spacious form of music where you can really have things happening within the space of that style.”

This influence was certainly obvious in Thievery’s early days some 23 years ago when Garza started producing dubby, acid-jazz with musical accomplice Eric Hilton. But, as history has shown, it quickly became much more than that. Demonstrating that their knowledge of the music that inspired them ran deeper than just sonic aesthetics, Thievery began to incorporate a subtle, but the overarching theme of political and social awareness, arguably establishing themselves as one of the first artists to prove electronic music can be more than just a somatic stimulus — it can evoke woke.

Long before our current era of fake news, false flags, and universally frustrating political turmoil, Thievery sounded the alarm, warning us of the impending clusterfuck. But did they really foresee that it would get this bad?

“I think things have gone far beyond what we were sort of ringing the bell about before people were talking about fake news and anything having to do with thoughts that were conspiratorial in some way,” Garza said. “And now things have just become inflamed to a whole ‘nother level. It’s hard for anyone to listen to each other these days. It’s crazy the reality we live in and it’s far beyond what we imagined. But trying to get people to wake up to certain thoughts, I don’t think that’s really our intention. We want to make people think, not tell them what to think, and hopefully open their ears and open their minds.”

And one need only look to the featured track, “History,” on Thievery’s latest album Treasures From the Temple, a companion to last year’s The Temple of I & I, recorded during sessions at Geejam Studios in Port Antonio, Jamaica — a studio steeped in history itself. “History” features an astute lesson from the ever-so-sensible Mr. Lif on the plight of black Americans, underscored by an acknowledgment of the ubiquitous struggle in the human experience. On the track, Mr. Lif’s clarion call for unity and enlightenment criticizes the “mind-numbing music heard on your local station,” — an observation many can agree with.

“Well, you know, I think things are becoming more dumbed down in general,” Garza said. “There’s a lot of great music out there, but at the same time, the ability for everybody to make music just creates a lot of noise for real messages to get through. I mean, we have a mind-numbing president and people are tuned-in to a lot of mind-numbing entertainment. It’s sad because it isn’t necessarily about quality.”

“I was talking to somebody recently and they said, ‘Oh, this artist has this many views, so they must be great.’ But that’s not a legitimate equation for me, because if that were true, then McDonald’s would be the best food due to the sheer number of people who have eaten it,” he said. “But that doesn’t necessarily convey quality, you know? There’s a lot of great types of restaurants or great types of spirits that a lot of people don’t know about, and for me, that’s what makes life interesting — finding those nooks and crannies of quality things, whether that’s music, food, spirits, or relationships.”

Indeed, it seems Garza’s secret sauce to Thievery’s success could be his ability to find those nooks and crannies in the myriad genres incorporated in Thievery’s style. In fact, one would need to be an audiophile to truly appreciate all the niche sounds, history and theory that have culminated in the band’s multi-faceted catalog of music.

That said, it comes as no surprise that some of the most legendary names in music are in fact fans of Thievery Corporation, including Paul Simon, who recently asked them to remix his preeminent track Diamonds on the Soles of Her Shoes, for a remixed release of Graceland.

“You never know with some people,” Garza said. “It was great to do a remix for Paul Simon, but we also opened for Paul McCartney once, and he wanted to meet us because he liked our music. So, they approached us and asked ‘Would you like to meet Paul?’ and we were like ‘Yeah!’ So you never really know who’s a fan, there are a lot of people in different genres who really love Thievery and vice versa. Eric and I grew up listening to a lot of punk and hardcore as well as hip-hop, so there’s a lot of crossover.”