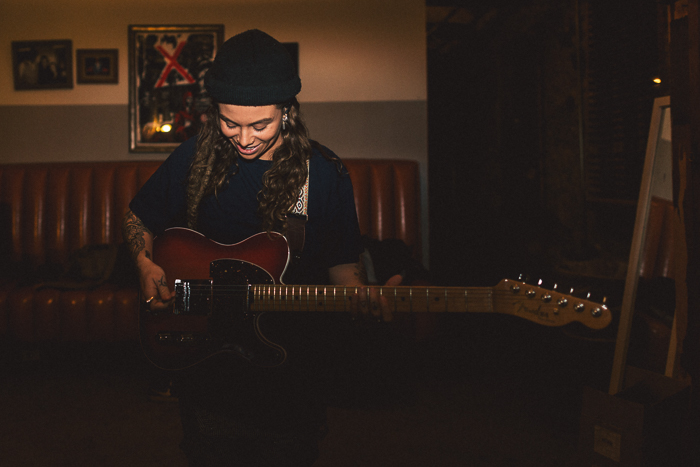 Psychologist Mihaly Csikszentmihalyi (good luck pronouncing that) is known for his work in positive psychology — the study of happiness and creativity — and was the first to really define the concept of flow state. Those not familiar with the term, have probably heard it’s more common description of “being in the zone;” that ineffable state of pure concentration when you block out all distraction and operate on subliminal skill. And whether Mihaly is aware of her story or not, Tash Sultana has implemented the flow state to not only save herself from falling down a dark path, but to also skyrocket her to fame for the musical virtuoso she is, and she’s appropriately titled her first studio LP just that, Flow State.

For Sultana, the flow state is something much more significant than just performing well, though. At the age of 17, she found herself in a state of drug-induced psychosis for the better part of a year, something she’s been candid about, but has now put in her past.

Before she was introduced to the psychological mechanisms behind it, Sultana invoked the flow state by going back to the thing she loved and was a prodigy of — making music. By devoting herself to her art, she pulled herself out of that dark place and began busking on the streets, quickly attracting attention for her ability to produce the sounds of an entire band on her own, through the use of pedal-looping and layering. A YouTube video and millions of views later, Sultana started selling out theatres and soon embarked on a world tour, all the while taking shit from nobody.

“I think I’ve kind of always had the great divide between people telling me that I can do stuff and equally the same amount of people telling me that I can’t do something,” Sultana told The Marquee in a recent interview. “So, it was just enough of a balance of the drive to make me want to do whatever I could. I feel like when everyone’s fully supportive, that’s really great, but when people aren’t supportive of you, you kind of want to shove it in their fuckin’ face. But I was always going to play music no matter what scale that was on, if I was still playing in small cafes and shit like that, it doesn’t take away from the fact that you’re still practicing and playing music. It’s a medicine really.”

“But it’s kinda hard when you start moving up on the scale because you’re doing all this creative art that’s so fuckin’ personal to you, you’re putting it out on what is now a big scale — on Pandora, iTunes, Apple Music — and that’s many, many, many people’s ears, and with that comes their personality, and with their personality comes their praise or their judgment. And I feel like sometimes when you put your whole heart and soul into something and it gets ripped apart a little bit here and there it can kind of dishearten you.”

She said she experienced some of this adversity not long ago, during a takeover of Fender’s Instagram page, which quickly elucidated her understanding of who those typical haters are.

“You know what, I’ve noticed it’s like a very specific type of person, it’s usually a 40 to 60-year-old man who can’t understand that I’m a guitar virtuoso — that’s what I’ve fuckin’ realized. There were like a bunch of old dudes commenting shit like “She can’t even play the guitar.” Man, I can fuckin’ play the guitar. Shut up,” Sultana said.

Despite these edgy reactions to the haters — who surely deserve it — Sultana’s philosophy is all about being a good human being. Aesthetically, her vibe provokes a bohemian spirituality, performing with incense burning, bare feet, and arms embroidered with tattoos of flowery mandalas. But philosophically she says she ascribes to no particular belief system, other than altruism.

“I’m just trying to live my life without being an asshole,” she said. “I think when you’re in a position where people are judging you just because they can, because you’re someone they think they know, I’m trying to not have judgment like that on other people. Because I know that when you don’t really know someone or know their story it can feel like shit, so I just try to not be an asshole. That’s pretty much it, man.”

And with that elegantly straightforward worldview, she’s found incredible success. Her latest album, Flow State, demonstrates her uncanny ability to play an absurd number of instruments — 20 on the new album, in fact. The 13-track album has Sultana performing every single note, not to mention, a voice that sounds like it’s been cultivated through years of training and vocal lessons — except it hasn’t. She’s entirely self-taught.

Those who have been privy to her shows know she recreates all these sounds live, swiftly looping guitar riffs, basslines, and drum machine beats — an A.D.D.-latent feat that shows a musical juggling of sounds, instrumentation, beats and melodies. And with the studio recorded crispness of her latest album, one can truly appreciate how brilliant she is across the wide array of her tools.

“Sometimes I’ll write music that I can translate straight to a record and then sometimes I’ll write music in the studio that I need to then go translate live. And I was really stressing about it for a long time because I didn’t really know if I was going to be able to get up to the standard that I had in the studio, but then I just thought ‘fuck it!’ When it’s live it’s not meant to be the same,” she said.

To a layman, that notion of “fuck it” might seem ridiculous when witnessing the intricate dexterity, timing, and skill Sultana displays performing her sets, but if reconsidered, her sentiment is the essence of evoking the flow state — put those distractions aside, say ‘fuck it,’ and let those instincts take the wheel.