Voodoo Dead present a witchy take on The Dead 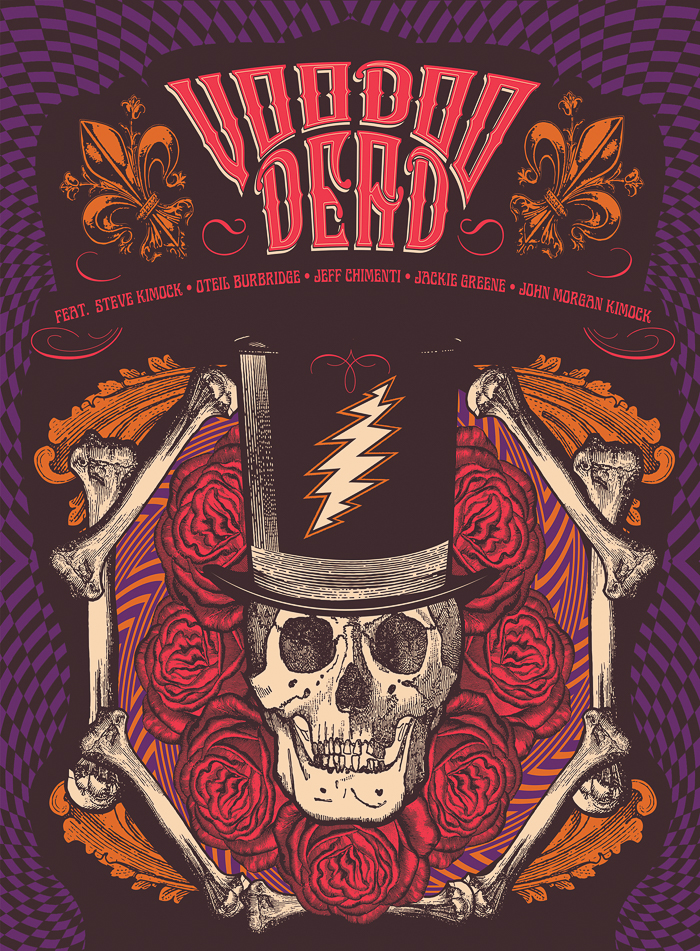 Twenty–three years ago the passing of Jerry Garcia rocked the music world. In the immediate aftermath of his death, there was rampant speculation as to what form the music of the Grateful Dead would take in the years to come. While Bob Weir continued on with Ratdog, and Phil Lesh put together his Phil & Friends project, these bands revolved around former members of The Grateful Dead and though each showcased a slightly different interpretation of the music they had played together for 30 years, it’s hard to argue that they were truly reinventing the songs. While this isn’t a bad thing, in many ways it felt like every project was on a constant search for the next Jerry and it took quite a while for the songs of The Grateful Dead to reach a place in the collective consciousness where they became part of the canon and new musicians began to make them their own.

Fast forward to the 2010s where several bands stepped forward with their own takes on the classic songbook. Chief among these currently is Joe Russo’s Almost Dead (JRAD) who are known for their raucously energetic approach to the songs, but a Steve Kimock helmed project dubbed Voodoo Dead has been showcasing an increasingly intricate and witchy take on the Grateful Dead catalog for the last several years.

While the line-up of Voodoo Dead has morphed since their first performance back in 2015, it currently features, at its core, Kimock on guitar, his son John Morgan on drums, Jackie Greene on guitar, keys and vocals, Jeff Chimenti on keys and a rotating cast of bass players including George Porter Jr, Dave Schools, and Dead & Company / Allman Brothers Band bassist Oteil Burbridge who will be on bass when the act hits Colorado this month for the first time.

Most of these guys have strong ties to the Grateful Dead family and their resumes crisscross like spider webs giving this project some serious street cred among hardcore Deadheads. Kimock’s Grateful Dead roots go back to the late 1970s, and in more recent eras both he and Greene have appeared frequently with Phil and Friends over the years. Chimenti and Kimock have each spent years in Ratdog, and Chimenti and Burbridge share the stage in Dead & Company. Quite simply, Voodoo Dead is a who’s who of the Dead’s extended family taking the stage to share a laid back and New Orleans flavored take on their favorite songbook.

With roots in the late-night mayhem of the New Orleans Jazz Fest, it’s no wonder that George Porter, Jr. got in on the mix for the 2016 incarnation of the band. However, when he couldn’t make a short 2017 tour, Kimock tapped Burbridge to hold down the low end. “I’ve done a few things with him over the years. Various projects, from just his solo thing to a couple of shows that we both ended up on,” Burbridge said of the invitation during a recent conversation with The Marquee as he prepped for a set at the Suwannee Roots Revival festival. “I really love working with him and I love seeing he and his son playing together. Way back in the day I think the Peacemakers played with Kimock’s band and I think he had Rodney Holmes on drums so we go back pretty far. Kimock always has the best players with him.”

Burbridge, who obviously has extensive experience with the Dead songbook as part of Dead & Company, has also subbed for Dave Dreiwitz in JRAD and while you’d think that this position as part of three of the most prominent Dead-related projects could provide some unique insight into how the different bands approach the music, he doesn’t really look at it that way. “I don’t think about it much and I don’t know that I can really explain the differences with words,” he admitted. “Anytime you have a different musician in the lineup it changes. You don’t have to try to approach it differently, it’s just gonna come out differently. You know you’ll find each other musically at a certain point of the night so you just have to play a little bit to see when it happens. It’s just like ingredients in food; I don’t know how to explain a flavor to you, but if the players are really good then you know it’s going to be good and different.”

While there is no doubt that the players in the line-up of Voodoo Dead assembled for this month’s Colorado run are really good, John Morgan Kimock may be a new name to some and, as he’s making up the other half of the rhythm section with Burbridge, fans will be thrilled to learn the two have logged some hours on stage together. “Recently I’ve been getting to play with John more often and, in fact, this weekend my regular drummer Jay Lane can’t make it because his flight got canceled due to the weather and he has to go back on the other coast immediately to play with Bob Weir, so John is filling in for him. I’m getting to play more with him recently and it’s been really great. We’ve got good chemistry,” Burbridge said, further highlighting the fluid nature of the musicians and bands with whom he plays.

With such a powerful line-up of improvisers, there’s little doubt that these shows will be special, but there is one question that is hanging out there: will they “Let Oteil Sing?” While this is a play on the “Let Trey Sing” quip from The Dead’s Fare Thee Well run that featured Trey Anastasio on guitar, the “Let Oteil Sing” movement took on a life of its own with Dead & Company and finally yielded some fruit when Burbridge took the lead on “China Doll” last summer at Shoreline Amphitheatre. He’s gone on to sing lead on at least three tunes with Dead & Company, but can’t recall if he’s done it with Voodoo Dead yet. “I don’t know if I have yet, but it’s a distinct possibility on this run,” revealed the bassist. “I’ve started singing more in other side things lately – especially those that are related to Grateful Dead. It’s new for me to be singing lead quite that much on stuff that isn’t my own. I’ve only really sang lead with my band and The Peacemakers and I would do a tune or two here or there with The Allman Brothers but now, especially in my band, I’m starting to sing a lot more.”