Trending Stories from The Marquee
You are at:Home»Album Reviews»Calm. ‘Things I Learned While Dying In Denver’
By Marquee Magazine on February 1, 2019 Album Reviews 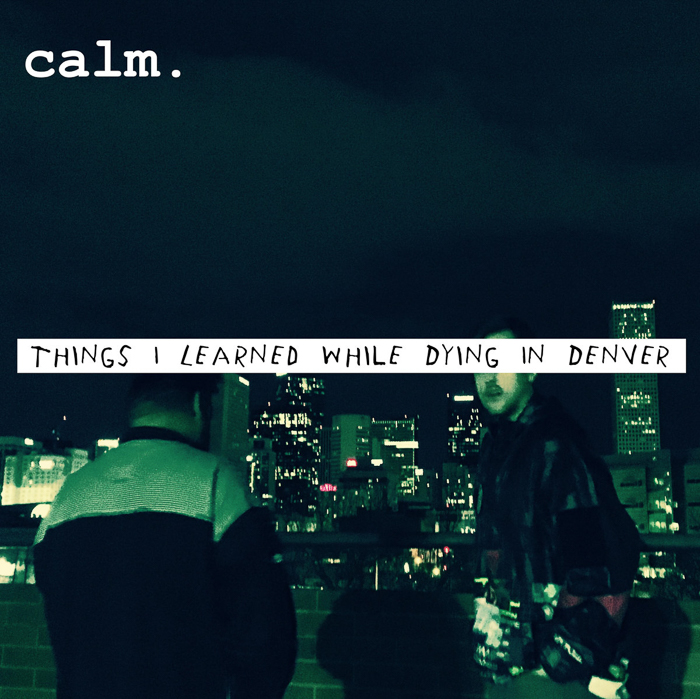 Calm.
Things I Learned While Dying In Denver

This album should be taught in schools. Seriously.

Calm. said that their new album is “an album about failing, failing better, doing an autopsy on yourself and breaking open the gold-coated egg of capitalism to see the dirtiness inside to navigate away from alienation.”

The album speaks out on homophobia, transphobia, white supremacy, and patriarchy.

But more than any of that, with a depth usually reserved for philosophical literature, Things I Learned While Dying In Denver eloquently, poetically and poignantly — with a direct connection to the heart, brain and soul — reminds listeners to “know yourself and focus on your strengths” and the dangers of being “spiritually poor.” The tracklist alone reads like a wise list of positive affirmations and advice with song titles like “Be Kind,” “Work Hard,” “Bet on Patience” and “Be The Bigger Person in Every Situation,” among others.

“Focus and create, tune out the fucking noise,” spits the Denver based MC/journalist Time, a.k.a. Chris Steele, while also offering nuggets of truth such as “Arrogance is a virus that will control+alt+delete you,” and “Know yourself, audit yourself, deploy self-awareness.”

Steele, who is also an investigative journalist and was deemed “the future of independent hip-hop by VICE and URB Magazine” has been called the Radiohead of rap and the love child of Neil Young and Andre 3000.

In the midst of a mainstream rap environment where Cardi B is singing about “million dolla deals,” and is about as real as her dagger-like fingernails, Steele is laying down verses that seem plucked from the stacks within the Boulder Book Store. “Pema Chödrön said it’s best to start where people are/Reflect on what you have so dialogue can start/You can’t have an orchestra if you don’t have a symphony/Everyone deserves a voice, develop and deploy empathy,” he raps on the record.

Joined by his longtime cohort, producer AwareNess, aka Chavo Trejo, Calm. also stands behind the socially charged messages that the album tackles. After befriending and outfitting a homeless man while filming a video for the new record, the duo then saw the man pushed out by the so-called urban camping ban in Denver. So instead of making their album release party all about themselves, they turned the event into a coat and warm winter gear drive benefiting the advocacy group Denver Homeless Out Loud.

It might not change the world on its own, but each little change they affect with their message is why the album should be core curriculum in American schools. Something has got to teach the new generation to “Focus on legacy not currency.”