Trending Stories from The Marquee
You are at:Home»Album Reviews»Kyle Williams Band ‘Elvis and I’
By Marquee Magazine on February 1, 2019 Album Reviews 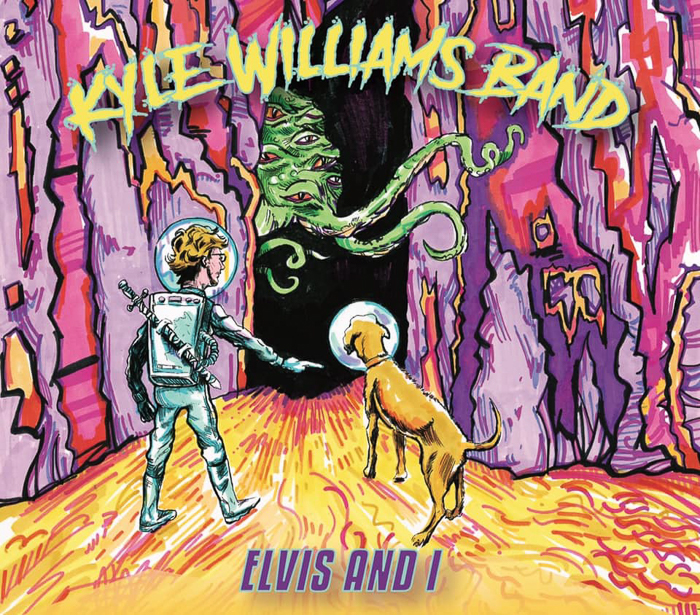 Kyle Williams Band
Elvis and I

Most irreverent, comedic albums focus more on the laughs than they do production, but the twisted mind of Kyle Williams decided to turn that equation around for his debut Elvis and I.

Williams approached the album — a collection of songs that he’s written over the last eight years, in the gem that is Jamestown, Colo. — as if it were the most serious record of the year. From the Bob Tarantino/Goat House’s recording to the incredible Steve Hull artwork, to the giant wealth of guest artists, Williams elevates his cheeky songwriting to super-dank magnitudes.

Though much of the material covers Boulder County-centric topics, Williams pokes fun at himself, wooks, cyclists and pretty much everyone, making the pointed humor universal whether the listener loves and lives within the bubble, or has mocking disdain for Colorado’s hotbed of eccentricities.

On “Sarong Song” Williams questions, “What’s wrong with wearing a sarong, I want to feel that breeze.” And on the presumably auto-biographical “E.N.B.” Williams tells a cautionary tale about being “that guy” at those “last Salmon shows” in Boulder. With a bouncy chorus, he sets the stage with the line, “Do your drinking take your drugs, make sure you have a buzz, now get your things we’re going into the show we’re heading into the show. Whiskey bottle’s at a ten, might as well just slam it then, cause there’s no re-entry, I think it’s bout time we go.” Sadly, as one might expect, slamming the bottle turns out to be not the best idea as Williams follows the line with “I thought I was doing fine, but I couldn’t even stand in line, I got arrested and I cried all the way home.”

Although Williams’ local ‘burg is a relatively tranquil oasis in the canyons near Boulder, the population absolutely explodes every weekend as cyclists over-run the roads leading to Jamestown, as well as the “downtown’s” sole business front, The Merc. On the aptly named “Biker Tune” — a Weird Al-like parody set to Jimmy Buffet’s “Volcano” — Williams hilariously sings “Well, I don’t know. I don’t know. I don’t know why they wear those clothes, I can see their package though.” He then adds the frustrating truth that comes with the weekly stampede: “In The Merc, we’ve got a bathroom line, but most the bikers never drop no dime. In and out I don’t hear no thanks, just stopped in for the septic tank.”

Despite all the pointed humor though Elvis and I also shows an aw-shucks loving undertone with tracks like “Rocky Mountain Tune” and the heartfelt “Mountain Strong,” which tells the tale of the 2013 floods.

Elvis and  I — which, by the way, is named after his dog, not The King — is a great balance of songs so sweet they come across like a slightly sloppy drunken hug, and funny enough to make you shoot your kombucha out of your nose.