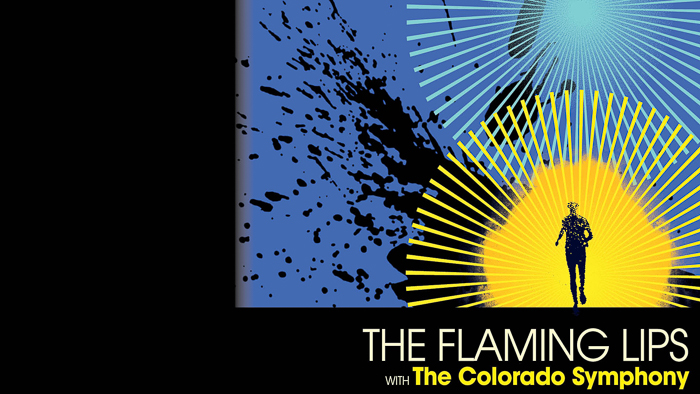 Since the calendar flipped to 2019, Wayne Coyne of The Flaming Lips has played a show in a cave celebrating the new year, married his girlfriend inside a plastic bubble, of course, celebrated his 58th birthday and officially announced that he’ll become a father in May.

In other words, his year has started off like a confetti cannon that the band has made a staple of their live shows over the last several decades together as The Flaming Lips. And the group is also celebrating its own milestone this year as their heralded album The Soft Bulletin — one of only a handful of albums to ever receive a perfect score of 10.0 from Pitchfork — turns 20 years old.

Coyne and his fellow FLips will honor the benchmark by returning to Colorado this month to perform the album in its entirety with The Colorado Symphony once again. In 2016, the group and the symphony teamed up to perform the album at the famed Red Rocks Amphitheatre, which they will release as a live album later this year.

The Flaming Lips’ astounding, three-decade-long career, and the endurance of The Soft Bulletin, in particular, isn’t much of a surprise to anyone who has sat down and digested the record and it’s cosmically deep essence.

“It has some kind of secret message about joy and pain and suffering that we didn’t know was in there,” Coyne said during a recent interview with The Marquee. “I mean, certainly, we made it and whatever the messages — for good or bad — we feel responsible for, but it really does have this gentle hope about it. It’s like a warning to some younger version of yourself that you’re going to discover that the world is — and I don’t think it’s for everybody; I think it’s for sensitive people, which would have been exactly Steven and myself when we were younger and we view it now as a message from the future — like some future entity is saying the world is really a, can be a really brutal, horrible place, but don’t let that ruin what’s beautiful about it. And I think it says that.”

Coyne, who lost his father during the making of The Soft Bulletin said that it’s “an album about despair, but it doesn’t have any despair in it.”

“Yeah, it’s a motherfucker,” he said. “If a chariot of the gods, a super-entity, which controls the universe — which is a joke — but if someone had appointed us these people, these humans that were going to make this, this enduring message, we would have said, ‘Dude, I have no idea what you’re talking about.’ We would have said, ‘No, we’re not the people. We don’t know what that is.’ But I think that our innocence and our optimism somehow is in there with this thing and I hear it now, but at the time we probably would have dismissed that as ‘It’s not powerful. It’s just our dumb music.’ But now I feel very absolutely lucky and honored that somehow these younger versions of ourselves were able to do this, this thing that they weren’t even aware that they were doing. It’s beautiful. And, It’s wonderfully vague, which I think is why it works so well. It can be exactly about me and it can be exactly about you and we could live completely different lives. And that’s not us knowing what we’re doing. That’s just dumb luck.”

With such a profound, sincere message, it’s no wonder that the album connected with audiences on such a visceral, human level. In addition to earning the Pitchfork equivalence of the Nobel Prize, countless best-of lists (both the year and the decade), and being called the Pet Sounds of the 1990s, the album has gone on to be a crucial part of the band’s sensory overload, communal freak-out, live repertoire.

“You know since it’s come out, it’s almost never lost its, you know, people being interested in it. So we’ve always played it,” Coyne said. “You know ever since we made it we played these songs virtually every night that we’ve ever played a concert and it’s always been part of us. If that would have happened to us when we were younger we probably would have thought, ‘Oh what a horrible burden,’ you know? But the people attracted to the story and the mood of The Soft Bulletin really are just the greatest audience to play to. Enjoying it and knowing it and living it. For a performer it’s such a sacred place to stand and say ‘I get to sing these songs for you, here we go.’”

One of the direct teachings, if you will, of loss on The Soft Bulletin is the line “suddenly, everything has changed,” and that feeling, which inevitably follows the passing of a parent — or anyone for that matter. Likewise, the song “Superman” drives home the bottom line that sometimes life gets even “too heavy for Superman to lift.”

It’s a feeling that 20 years after Coyne lost his father to cancer and released the album, people still continue to share their stories of loss with him and how The Soft Bulletin played a role throughout the experience.

“That’s the greatest compliment anyone could ever have,” Coyne humbly said. “When you speak from those types of experiences we all have them and they’re all unique and we’re all uniquely suffering in this way. I think it’s the truest, truest reason why music exists because it’s a pain that we want to share, but we don’t really want to share pain. You know if my arm is hurting, I don’t really want your arm to hurt, but this type of pain we do want to share it and we understand each other. It’s such a strange… it’s really even hard to speak about it, but music does that so eloquently.”

But again, Coyne remarked that the album, despite its universal acclaim, isn’t for everyone. It takes a certain mindset to really understand the message. “I had some sense of what could come from [the loss of my father]and all that. And in the realm of things that could be bad, it was quite beautiful. It was painful and horrible, but also had an element to it that allows you to see the beauty of life. But I think it depends on the person and what you’re making of the experience. There are plenty of people — and I don’t talk to them very much — but who are very resentful to the universe that they didn’t get what they wanted and, you know, what can you say to that?”

Shortly after The Flaming Lips and The Colorado Symphony reunite for this performance, the group’s rocketship start to 2019 will gain even more momentum when on Record Store Day (Saturday, April 13) they will release their 15th studio album King’s Mouth.

News of the album, and its special guest broke in early December, but until now, Coyne hadn’t been able to discuss the details as to how it all came about.

“This new record is the best way to make a record, where you don’t really know you’re making a record until it’s halfway done and it’s turning out really good,” Coyne told The Marquee. “So, we have this art installation thing called The King’s Mouth. It started out as this immersive light show. It’s video strands. Light show doesn’t quite do it justice, because it’s these video strands that kind of go all around you. You crawl inside of it and you lay in the mouth of this thing and you look up like you’re at a planetarium, but littler — for you and six of your friends — to lay in there and have this 12-minute experience.”

“The first museum we had it in, the curator encouraged me to make it more of a story figuring maybe people would spend more time with it if they feel a story. And I think he wanted me to write something out, but I just started to draw pictures of what the story could be and he thought it was really working. So I went ahead and did these ten drawings, paintings, collage things that sort of told a story of how The King’s Mouth became The King’s Mouth — just absurd drawings that I did. And the more it was out there in the world it became, ‘You should make those into songs that could be 10 songs on a record. And about a year and a half ago we thought maybe we could. And as we worked on it I was adding this narration which is really kind of the titles and the story that went with those drawings that I did. You know those drawings had little explanations of what was going on and I was putting in this narration and sometimes it would be Michael [Ivins], or Steven [Drozd] or myself doing the narration, but none of that was really satisfying us that much. And I don’t really know why I was really listening to a lot of The Clash at this time. I had seen a documentary about them with Mick Jones talking and Joe Strummer and I started to reevaluate things I hadn’t heard in a long time and I thought maybe Mick Jones could be the narrator. I’d seen a couple interviews with him and I do love that British gentleness. I think there’s some Obi-Wan Kenobi in there. And I know people know we’re from Oklahoma and America, and why is there this very British narrator and I would say ‘Because I like it. I don’t have any reason for it to sound like a guy from Oklahoma.”

Through a friend, Coyne reached out to Mick Jones and was astounded at the response. “I reached out and figured if not, I’ll move on. I’ll try someone else, but I have to try to reach out and ask him. I kept thinking we’re going to keep working on this, ‘let’s hope he says yes,’ ‘let’s hope he says yes.’ And out of the blue I got this digital download of Mick doing the whole thing. He just did it all. I get this download and it’s all there. He did the whole thing even before we had all the songs finished. So luckily, I was even working with Mick Jones’ speaking and sometimes making songs around that,” Coyne explained.

“I think it’s otherworldly in the sense that it doesn’t sound like any of our other records because it’s using this palette of the people in The King’s Mouth story and all of that. But in another way it’s just so charming. It’s meant to be almost slightly like a children’s album which I think really works for Flaming Lips’ music. I think Flaming Lips’ music is like children’s music, we just happen to be grown ups.”