Trending Stories from The Marquee
You are at:Home»Cover Story»Turkuaz
By Marquee Magazine on February 1, 2019 Cover Story, Features, Interviews, Timothy Dwenger 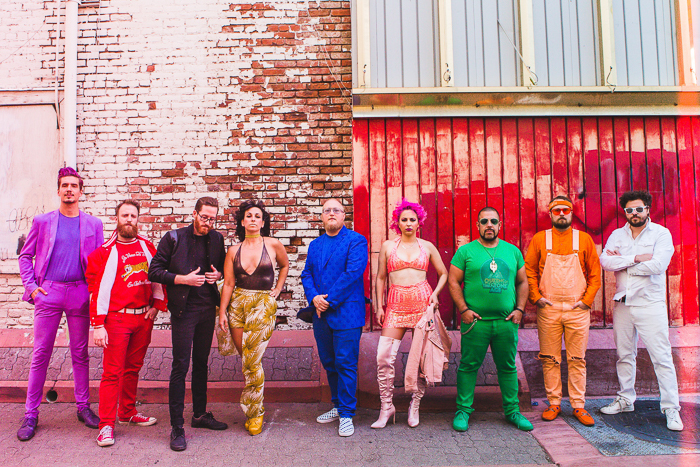 Infectious beats, punchy horns, bright colors, and several powerful vocalists is what Brooklyn’s funk powerhouse Turkuaz is known for. The band, who started touring full time in 2012, have made a name for themselves on the scene with a dynamic live show and strong albums that draw as much from The Talking Heads as they do Sly and the Family Stone. But, for many newbies, it’s a rainbow of colors that really sticks in their head as they wipe the sweat from their brow at the end of the night.

“Way, way back in our early years we were always looking for wacky things to wear on stage and Josh [Schwartz, baritone saxophone and vocals] found these jumpsuits for the horn players to wear,” said singer, guitarist, and founding member Dave Brandwein during a recent interview with The Marquee as he packed for the band’s third consecutive Jam Cruise. “They were just red and blue but then, years later, when we were starting to tour, my wife, Danni Brandwein, who is the creative director for the band and also helps with most things in the visual realm, was compiling a bunch of different wardrobe options and one of them that she came up with was ‘what if we do the jumpsuits and everyone wears a different color?’ We have so many different people on stage and so many different vibrant personalities and talents that sometimes, especially in the early days when we were getting crammed onto tiny stages, you can lose people in the mix. We found that if each person stood out and had their own color it really helped to define them and it symbolized their identity within the group. I think that symbolism carries over and as we expanded onto larger stages it only made it more impressive and cooler looking and distinguishes each member in their own little world.”

Today that well-orchestrated color scheme is a defining element of the band. George Clinton and P-Funk had neon braids. Prince had purple suits and symbols. And Turkuaz, well they’ve got a rainbow of color that they back with a diverse repertoire that may flirt with rock and R&B but never strays far from dance floor packing funk.

With their most recent album Life In The City, Turkuaz presents a concise, nine-track album three years after dropping Digitonium, a 24 track opus that draws heavily on, and is rumored to synch up perfectly with Disney’s animated classic The Sword in the Stone. While Brandwein said that the recording process was similar for both albums, he acknowledged that the band had to be much more selective when finalizing their recent release.

“This was kinda like throwing a lot of stuff out there and then seeing what stuck, where on Digitonium we had such a specific aesthetic — or vibe — in mind going into it and we used every single bit of what we wrote. That project allowed us to keep writing and keep expanding,” he said. “This time around we wanted to boil it down a little more and we wanted it to represent more of what we do in our live show but also still wanted it to feel polished and produced. It was a much harder process to make this album because it was a lot of trial and error and a lot of writing and re-writing. It was a difficult and a more collective process but, in the end, I think it produced something really cool in nine strong songs each with their own identity.”

The album, which clocks in right around 44 minutes (in contrast, Digitonium’s 80), is an album in the truest sense of the form and begs to be listened to from beginning to end. Along the way the listener is treated to some true gems including Brandwein’s confessional “The One and Lonely” and Schwartz’s hypnotic “If I Ever Fall Asleep,” the latter produced by The Talking Heads Jerry Harrison, showcases the many weapons in the band’s arsenal and allowed Turkuaz to work with one of their heroes.

“I was a little nervous when I first met up with Jerry,” admitted Brandwein. “I met him at his hotel, we talked all night, and he was really cool about anything I wanted to ask him. It got to the point where he was telling me all the stories I wanted to hear and answering all my questions. I was like ‘This is cool, this isn’t going to be weird at all.’”

The product of their first foray in the studio together, the standalone single “On The Run” was released in late 2017 and proved right away that this relationship was going to bear fruit. So much so that the band invited him back when they were working on Life In The City.

“He was really honest about the things that he could see room for improvement on and challenged some very basic ideas — even just the tempo we were playing songs at in the studio. He was pushing us to slow them down a little bit, occasionally — which is hard to believe because both the songs we did are still pretty fast — but believe it or not they were faster before he got his hands on them,” laughed Brandwein.

While the music of Turkuaz tends to elicit feel-good party vibes, the bass-heavy “The One and Lonely” deals with the darker side of life on the road as Brandwein used the song to process an internal struggle he was having with alcohol.

“These last couple of years I’ve been taking a deep look at my drinking and when a lot of stuff is going on internally, it has a way of making its way into the music whether you want it to or not. It is something that I kinda deal with on my own and writing about it helps me sort through thoughts and ideas,” he revealed. “As you can imagine with my lifestyle, it’s easy to get carried away and lines start to get blurred when you are basically creating a party every single night on tour. Eventually, the drinking stuff got out of hand. It got to this point where I was in a city and I remembered the last time I was in that city and it was the same thing — an all-night party. I was like ‘man, I don’t know how much longer I can do this. I’m not going to live for very long if I keep treating myself this way.’”

Fortunately, Brandwein has gotten things under control and has been alcohol-free for the last year and a half. While it hasn’t always been easy, there’s little doubt it was the right choice. “Travelling and being in a touring funk band is not really something that you think would be a great profession for someone who is staying away from drugs and alcohol but it’s interesting, you start to really shift and the music has to become the focus which is another big part of the reason why I was excited to make that change. You can coast on your own natural ability for a while if you are partying a lot but if you lose that element you really have to get high on the music itself. Now I tend to want to push to the next level and get better at my craft however I can. It’s been really enriching in that sense.”