Trending Stories from The Marquee
You are at:Home»Cover Story»Andy Frasco & the U.N.
By Marquee Magazine on April 1, 2019 Cover Story, Features, Interviews, Sarah Baranauskas 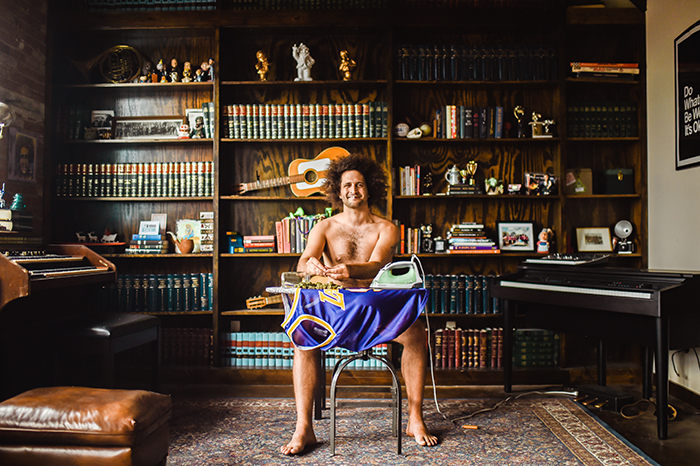 “I know I’m not of the normal jamband mentality,” Andy Frasco said during a recent interview with The Marquee. “I’m not playing solos. I rely on my band to do that, or I’ve got to change up the shtick. I have to rev the engines and figure out, if I did the bar mitzvah here, this is where I am going to do the conga line. I’m not the greatest keyboard player. My strengths are getting the crowd involved.”

Those who have never seen Andy Frasco & The UN may be scratching their heads on how he went from jambands to bar mitzvahs. Getting hip to Frasco means trading noodling for a performance reminiscent of Dan Deacon’s crowd conducting, sunny day Sam Cooke soul — and a hefty dose of rock and roll physical comedy that brings the crowd along for the ride. While the UN — Andee Avila (drums), Shawn Eckels (guitar), Ernie Chang (saxophone), and Chris Lorentz (bass) — rages the stage, audiences may find themselves in the middle of a raging congo line or hoisting Andy on a chair above the crowd a la “Hava Nagila.”

It’s fun as fuck when Frasco brings the party. But there was a point in recent years where the party was taking over off-stage as well. He described the moment it turned.

“I was partying a little too hard, doing coke all the time and operating on sleep deprivation. I was not taking control of what I was supposed to be doing. Instead, the party was controlling my destiny. When I first started doing music I was to be a musician, not a party animal.”

After a few days of going strong, the high sets and the blues settle in. Frasco had an anxiety attack while watching the HBO Dr. Dre documentary The Defiant Ones. He recognized something familiar in Eazy-E’s life. Frasco didn’t want the rest of his story to play out similarly.

Frasco quit the uppers and found a better sense of balance, which includes a psilocybin microdose regimen. “I really think it can cure mental illnesses,” he reflected. “I was going through a thing where I was super depressed for a couple of years. Having to feed eight people in my band and it’s all on my shoulders. Feeling like I’ve gotta run this thing was stressing me the fuck out. So I took some psilocybin on and off for about a year. It changed my mindstate about everything.”

Frasco described the larger process of working with some of his unhealthy habits as a “spring cleaning in my brain.” “I had been doing 200-plus shows every year for the last 13 years and had a one-track mind about what my life should be. I had to take a step back. And then, around the same time, to have all these musicians I look up to preach a gospel of getting more depth and authenticity with exploring how you feel instead of writing for other people. It really woke me up.”

With a renewed energy from shifting into a different gear, the album, appropriately called Change of Pace was recorded on the road at four different locations with four different producers. As Frasco described, “I feel comfortable when I’m traveling. I feel like I have to keep moving.”

“The first [producer]we had lined up was Dave Schools. He was the guy who was like ‘Are you gonna write five versions of ‘Blame it on the Pussy’ forever or you gonna write the songs you want to write — songs that are timeless.” The Schools’ sessions were recorded at Praire Sun Studios, where Tom Waits recorded Mule Variations, with the mountain forests of Northern California and the old chicken coop that houses the studio giving the location, “a huge Tom Waits vibe,” as Frasco put it.

Besides the producers, the different locations influenced the recordings too, as Frasco described. “We went to New York to do the ballad and softer indie songs, working Caleb Hawley. We went to New Orleans with Ben Ellman who produced The Revivalists, to capture those Mardis Gras celebration style-songs.” Rounding out the producer lineup is Charles Goodan, representing the band’s hometown of L.A.

The title track of the record, “Change of Pace,” was the first song that came out of Frasco’s transition period, setting the tone for the album. “It felt right. It was the lyric format and theme I wanted for this record. It really came from an authentic place. It’s about we always want what we don’t have. In the first verse, I want to get a house with a white picket fence and settle down with a girl, but in the second verse, I decided, ‘Well, that doesn’t work for me anymore, back to traveling!’ We’re always going to be changing. There’s a middle ground deep down in the core of it but, whatever change of pace you need to do, do it.”

This harkens back to how Frasco interprets Schools’ thoughts on timeless songwriting. “I was trying to figure out what ‘timeless’ is and, to me, it is just being authentic, so these lyrics are about being authentic about what I feel in this present moment. It could change. It will change because we grow. If we don’t change our thoughts then we are not growing.”

Another part of Frasco’s newfound approach to the rock and roll life is his podcast (Andy Frasco’s World Saving Podcast). Feeling less depleted, Frasco found he had more usable time on his hands. Admittedly prone to overthinking in the quiet van rides between gigs, Frasco has also found the project to be a more sustainable way to focus the direction of the creative energy that drives over-analysis.

“I get to interview guys like George Porter and Ivan Neville and Dave Schools. People that have been doing this for decades. Hearing their story about how they stuck it out through all the trials and tribulations gives me hope that I can lead this band in the right direction as well. Since we have an hour-long conversation [on the podcast]we can talk about drug addiction, divorces and marriages. I’m trying not to focus too much on, say, the songwriting process. Instead, I am trying to understand these people. It takes crazy people to live on this road. If you’re not crazy it’s going to eat you up.”