Trending Stories from The Marquee
You are at:Home»Features»Jeff Austin Band
By Marquee Magazine on April 1, 2019 Features, Interviews, Timothy Dwenger

Rebuilding brick-by-brick with a group of young prodigies 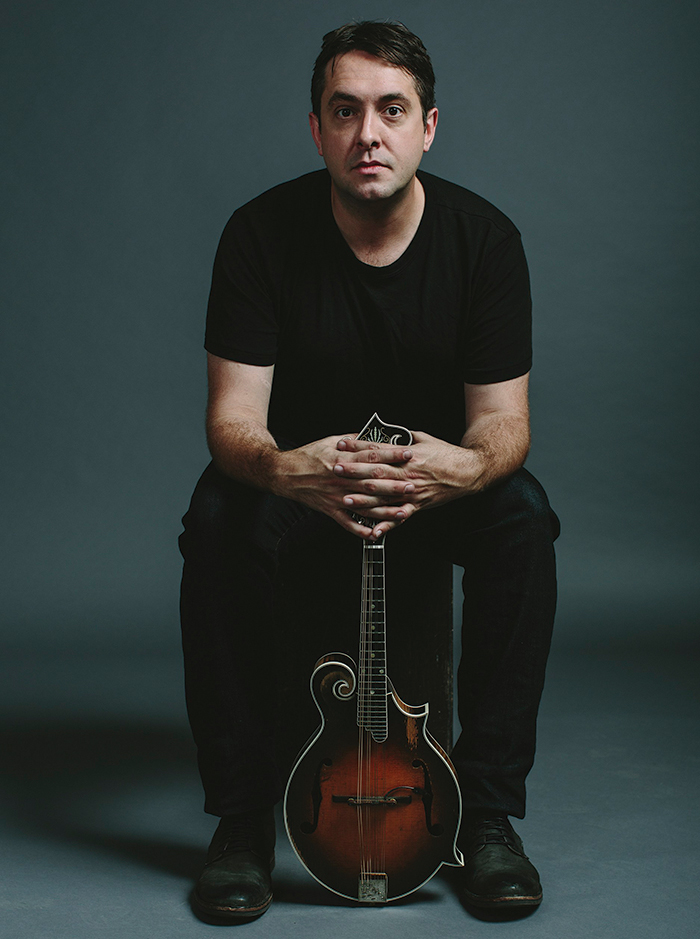 Every artist faces times in their career where they are required to reinvent, reestablish, recover, or rebuild and for pioneering jamgrass songwriter and mandolin player Jeff Austin, the last five years since his departure from Yonder Mountain String Band have been precisely that time. Now, pushing 45 with a family and a home on the outskirts of Chicago, he’s accepted the role of mentor on the scene and is giving some stellar young players an opportunity to shine as he sits poised on the edge of regaining his prominent status in the bluegrass world.

“There’s a big philosophy I believed in: ‘the work continues.’ And I haven’t said that a lot lately because I think instead of saying it, I just had to do it,” Austin said during a recent interview with The Marquee.  “I remember I was sitting with Sam Bush — I didn’t grow up with a dad, so Sam’s basically like a dad to me — in the hotel room last year after doing a show with him in Montana and he was asking me, ‘How you doing? You hanging in there? What’s going on?’ I was being honest and we were talking about all the un-fun stuff as far as music goes. I remember I told him, ‘Well, you know Sam, I’m like four years in here and I’m just kind of rebuilding the kingdom brick-by-brick.’ And he looks at me, he’s like, ‘Really?’ I’m like, ‘Yeah.’ And he’s like, ‘I’m 37 years in.’ Then I looked at him and went, ‘Wow, that was some deep, profound shit.’ And it just, it goes to show how much work it takes.”

There’s no doubt that it takes work, and over the last year or so that work seems to be paying off as The Jeff Austin Band has started to appear on the line-ups of more and more prestigious festivals and events like WinterWonderGrass, The Blue Ox, and last summer’s triumphant return to Planet Bluegrass and the stage at RockyGrass. While Austin gives some of the credit to his longtime manager Barron Ruth for helping coach him through some trying times, he points to hard work and the outstanding players he is currently sharing the stage with as the main factors in the band’s success.

“I’m the oldest guy in this band by a decade,” Austin laughed before pausing to reflect on his 24 years as a professional musician and then picking up where he left off with praise for internationally known banjo superstar, Kyle Tuttle. “He’s one of a kind, I’m telling you. If there’s a better banjo player then show them to me. It’s a rare gift when somebody can connect theoretical musical depth, like knowing what phrasing you’re using, or what key you’re in, or what variation on the chord you’re using with, fucking balls of fucking steel. To just be able to dig in like he does and play his ass off, it’s amazing.”

Holding down the low end is Colorado-based Jean-Luc Davis who is coming up on his one-year anniversary with the band and Austin had similar praise for him. “With Jean-Luc, the first show he did with us was in Denver at the Spread the Word festival,” he remembered. “I sent him 60 or 70 songs and he showed up to that first rehearsal and just nailed everything — every chord, every verse, knew all the harmonies — and I was like, ‘What is going on here?’”

The most recent addition to the Jeff Austin Band is 19-year-old flatpicking prodigy, Julian Davis. “I met Julian last year at a festival we did outside of St. Louis called Pickin’ on the Picknic; an awesome, awesome little festival,” said Austin. “The folks from the festival said ‘Hey, we’ve got this guy, he’s kind of an artist-at-large so maybe he could sit-in with you?’ I got to talk to him for a bit and I’m like, ‘There’s something about this guy. There’s something going in this guy’s world.’ He sat in with the band and we were like, ‘Wow!’ So, when Mike Robinson, who used to play guitar with me, decided he was going to do different stuff I thought, gosh, who should I call? Then immediately I said, wait a minute, I know exactly who I should call! He’s an old soul. He has that killer instinct and it’s fun to look across the stage at him, but his head is on his shoulders in the greatest possible way and he plays the shit out of the music and he sings his ass off.”

Now that this band is in place, Austin is looking for time to turn his attention to getting into the studio but admits it’s harder than he wants it to be with three kids and a packed summer tour schedule. “The hardest part is being away from home. When I tour as much as I do, it’s tough to be able to find the time to go away again. It’s that extra time. It’s just kinda hard to piece that together,” he said before speaking excitedly about a vast catalog of new songs that sit waiting to be let out into the world. “I’ve been writing a ton of stuff. I would say there’s maybe not a hundred songs, but a decent sized working catalog of stuff that people just have not heard and I haven’t played live at all. There is also an entire record written that I have to make and put out this year.”

Whether Austin and his band find the time to make that album this year remains to be seen, but it sounds like some internet sleuthing could probably turn up tunes like “Living In Between” and “Static” that Austin expects to make the final cut. “I’ve had to be part of the whole ‘the record label doesn’t want you to play the new stuff live’ thing before,” he said. “But in my world right now, it seems, having things that people may have heard, or are familiar with, is really helpful. With the exception of one, two, three songs out of twelve, everything has been played live.”

With new fans just getting turned on, and old ones coming back into the fold, it feels like Austin is geared up for very good things over the next couple of years. “I could not be more thrilled with where everything is headed right now. It’s been a lot of work but I’m very fortunate to have these guys in the band,” said Austin. “I think of how Sam Bush might have looked at me the first time he sat in with Yonder on the Telluride stage and that is how I’m getting to look at these guys as they do things like WinterWonderGrass and RockyGrass and just to kind of be like, ‘Wow!’ It’s seeing it through a different set of eyes and that takes you back to a place of real appreciation.”