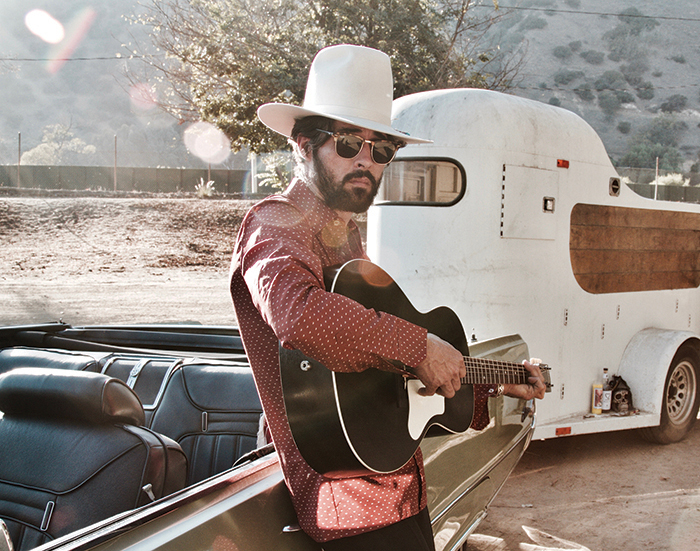 Life in the spotlight isn’t always easy, and Grammy and Oscar-winning songwriter Ryan Bingham has seen both sides of the coin so to speak. A poster child for the American dream, he was born in the deserts of east New Mexico into a struggling family that chased work around the Southwest and the border towns of Texas and, in his teens and twenties, he rode bulls in the rodeo. He’s at home in a cowboy hat and boots, and he’s proud of his two children, the family business he started with his wife, and the career he’s built up from nothing over the last 18 years. Since the 2010 accolades that came with the success of his song “The Weary Kind” from the film Crazy Heart, he’s been flooded with opportunities, but he’s also seen the nasty side of standing up and supporting those who believe in the things that he believes in.

In October of last year, Bingham joined Hayes Carll, Stephen Stills, Joe Ely and others at a Get Out the Vote rally for Texas senatorial candidate Beto O’Rourke. “I got a shit ton of flak for that one man, but I don’t fucking care,” the 38-year-old laughed during a recent interview with The Marquee. “I’ve supported democratic candidates forever and while everybody has their right to an opinion, he definitely aligns with a lot of my morals and things I’m behind, so why wouldn’t I support him?”

Bingham went on to discuss the fact that many of his fans seem to have missed the left-leaning political messages that have been woven through his songs as long as he can remember. “I think people just associate me with conservative values because I wear a cowboy hat, have a background of riding bulls and rodeo stuff, and I sing country music and they just kind of tie that to the image. The rest of it, they don’t really see, you know?” he said. “I notice people taking songs out of context and interpreting them in ways that I definitely did not intend. So maybe it just went over some folk’s heads.”

A quick perusal of the iTunes reviews of Bingham’s most recent release, American Love Song, reveal several one-star ratings that aren’t tied to quality of the music at all, but rather to the fact that he speaks his mind through his art. Comments like “Bro, our country is so divided and folks like you are making it worse! You came from Texas and have shotguns and hunted but now you are a hypocrite sir!,” “Your large country fan base will head for the exit door,” and “I don’t buy music by those who use their own platform to express their politics” highlight not only the divide in our country, but the fact that a subset of Bingham’s fans don’t want to hear opinions that differ from their own.

Sure, the album has some inflammatory lines on it like “there’s a racist man / In a white house up on the hill,” from “Got Damn Blues” and “As the president shits upon the nation / Wipes his ass with all denominations / Turns around and begs for donations / Ridin’ on the back of the poor man / Sellin’ him lies, lies” from “Situation Station.”  But song has always been a medium of social expression and the first amendment — not to mention his own dedication to his art — confirms that Bingham’s got every right — and in fact, a duty — to express his thoughts in whatever way he sees fit even if it does alienate some of his fans. Fortunately, “some” may be the operative word here as the tour schedule on his website is littered with “Sold Out” stamps on towns ranging from Phoenix to Minneapolis and just about everywhere in between indicating that Bingham’s brand of country still resonates with countless folks around this fractured nation.

As he was gearing up to release American Love Song in February, Bingham went on record saying that he set out to make a “country blues” album and, with the help of Bob Dylan sideman Charlie Sexton, in the end, he feels he accomplished his goal. “When I was thinking about making this record, I just wanted to get with somebody that really understood where I was from and where I was coming from with the influences that I was talking about,” he revealed. “I’ve always been a big fan of the way the Rolling Stones did country and blues — like on Let It Bleed and Beggars Banquet and those records — and I’m a fan of guys like Lightnin’ Hopkins, Mance Lipscomb, and some of that East Texas blues stuff, so I was thrilled when I found Charlie Sexton and told him I want to make a blues record, a country blues record, and I didn’t have to really explain the influences to him.”

While the musical influences were important, Bingham also put a lot of stock in the fact that Sexton understood the geography and the culture of Texas and had connections. “He’s a Texas guy. You know, he’s from the San Antonio/Austin area. He knows a lot of the towns that I lived in. When I talk to him about the Americanos Del Norte and the Corridos from Laredo and he’s like, ‘Oh yeah, I get that.’ And he’s so well versed musically. He can play all those styles and bring that stuff authenticity with the way he can play guitar and piano and he knows the guys that can do it if we can’t,” he said.

The result is a blues-infused album that is equal parts jangly country, psych-blues, and west Texas ballads. Despite what the naysayers may be spouting about, it’s a solid album that showcases Bingham’s evolution as both an artist and a person. There’s no doubt that, in this tumultuous time, it’s bound to cost him some fans, but it’s probably going to win him a whole lot more.

“I’ve been getting heat from people for things like that Beto event for a long time, but that’s not how I live my life. I don’t let people like that back me into a corner with fear and all of that fucking bullshit,” he said. “I’ve got a lot of friends on both sides of the fence, especially with where I come from — New Mexico and Texas — and as I’ve moved and grown as a human being and experienced the world in different ways that’s opened my mind to things. I just try to keep an open mind when I’m singing the songs because I know there’s always gonna be people out there coming at me. I just feel it’s very important to get out there and be truthful to myself and to other people that are listening to me. I’d much rather play for 10 people in some small club that have an open mind and are humble and have some sense of awareness than 100 irate fear mongers.”