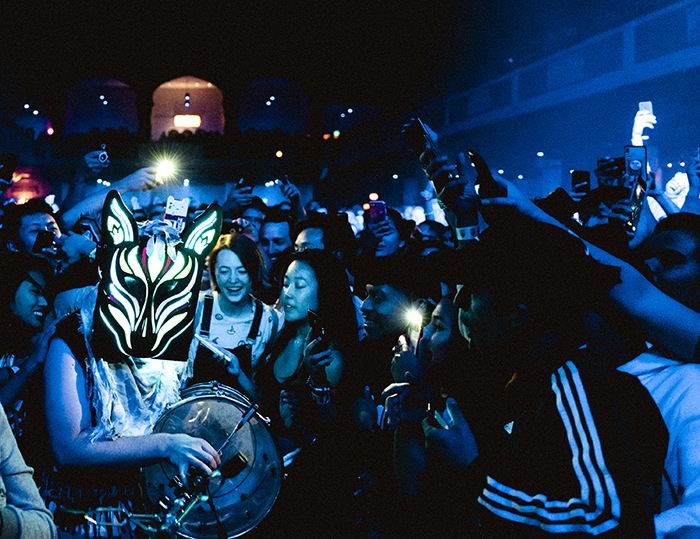 It’s become increasingly popular — as captivating visual experiences are now intrinsic aspects of almost every show — for electronic musicians to don masks or mystify their persona to some degree. But while these acts embrace varying levels of obfuscation, it’s rare for an artist to maintain a completely anonymous identity. But for nearly a decade now, Slow Magic has somehow managed to remain in the shadows — his true visage, name, and familial ties undisclosed to his audience — except that he claims he is the son of one of the most mysterious and inimitable electronic producers of all time: Aphex Twin.

Doing the math and a little online sleuthing makes this claim seem highly suspicious, but when asked in a recent interview with The Marquee why he had Aphex Twin’s logo prominently displayed in a number of social media photos and on the back of his Jeep’s spare tire cover, Slow Magic said with all seriousness, “he is actually my biological father.”

Maybe that’s the beauty of having such anonymity; expending all that effort to keep one’s identity hidden, while also reaching a certain level of fame, surely affords him the privilege to play around in the obscurity. And after all those years one might wonder whether he’s had any close calls or moments of wanting to let his guard down. This from a guy who even -sported the mask in all of his recent wedding photos!

“A few people have figured out who I am when selling merch at my own show, but they’re never really sure. They’re like no, you’re just a roadie,” he said. “There are a lot of difficulties in having a hidden identity, but it’s mainly just having to be a little more careful all the time. The internet is where everyone lives their life now, so maybe it’s a blessing. I think it’s actually one of the reasons I started doing this in the first place.”

Slow Magic said the impetus for his concealed countenance is an attempt to draw attention away from himself and instead have it focused on his unique style of music. And true to character, he’s ambivalent about what type of animal his mask represents. Instead, the cryptic coyote/fox face is whatever his fans want it to be — it actually might even be more of a zebra.

Whatever the case may be, it seems pretty clear that Slow Magic’s aesthetic elicits a sense of escapism and he tends to agree. Though he says he’s not entirely sure where that motif originally stemmed from.

“I think it happened naturally by spending a bunch of time making music on the computer and maybe being stuck in life at a certain point, or feeling like I couldn’t get out of situations I was in,” he said. “I think the music I gravitate toward most is music that paints its own world or brings you to another place emotionally. That’s why I make music that might seem that way, I like to create that kind of space.”

There’s certainly a quixotic nature to Slow Magic’s live sets as he weaves lofty, ethereal synths with pounding, tribal drum beats that are almost all performed live. And on occasion, he even ventures into the audience with one of his snares, unafraid of being unmasked and having his identity exposed.

During the interview, Slow Magic was gracious and reticent, exuding a noticeable humility, though his responses were cautious and terse  —  rightfully so, he has to be particular with what he says, so as not give away too much.

But his demure demeanor seems to go just beyond the Slow Magic persona, and seems to more than hint at it being one of his actual traits; the mask being an obvious extension of an introvert.

“Yeah, I think it might be. It all just happened naturally; the idea of doing a project with no identity and just keeping the music as a forefront,” Slow Magic said. “But I learned over the past years that it helps to have a mask on stage, it lets me do more of what I want without worrying what I look like. Everyone has a stage persona, mask or not. I think that’s part of playing the concert, everyone gets to enjoy separating from themselves and just being free.”

It seems this sentiment doesn’t just describe Slow Magic’s whole decorative schtick, but also his music and his fans’ passion for his art. It’s a reminder to his audience, most of whom are already well aware, that they shouldn’t get carried away with who he is, but should instead concentrate on what his music means, or how it makes them feel. And even as his notoriety has grown, he seems content sticking to this core tenet.

“For the last EP, aside from the one feature, I felt a lot more freedom going back to making tracks while sitting on the couch with family, watching tv, and just making songs with my headphones on,” he said. “It’s important to remember you can get really fancy, and with the growth of this project there have been a lot of opportunities that presented themselves, but at the end of the day, I love making music on my computer. I guess I felt compelled to work on stuff that didn’t have rules, and it felt good to put out this EP so quickly.”

Whether a devout fan or one who has never seen Slow Magic before, his latest tour promises a new iteration of everything; the music, the mask, as well as a number of other novel visual enchantments. Part of that could be due to a tour-life hiccup he went through in December, when, with less than 24 hours before a show, his laptop wouldn’t even turn on. In a very humble and honest social media post, he explained that his whole set runs on the laptop, including the LEDs embedded in his mask. He managed to salvage and/or rebuild everthing, but shared the story with his fans because, he said, “I feel like a lot of times artists and everyone on social media tries really hard to make it look easy when life definitely never is.”

Now with that clean slate and new motivation, Slow Magic’s live show has been completely revamped.

“I’ve been working for the past month on a brand-new show; new everything for the first time in a long time. I’m really excited. I have Covex opening and it should be a lot of fun,” he said.