Trending Stories from The Marquee
You are at:Home»Album Reviews»Trash Cat ‘Welcome to Trash City’
By Marquee Magazine on April 1, 2019 Album Reviews 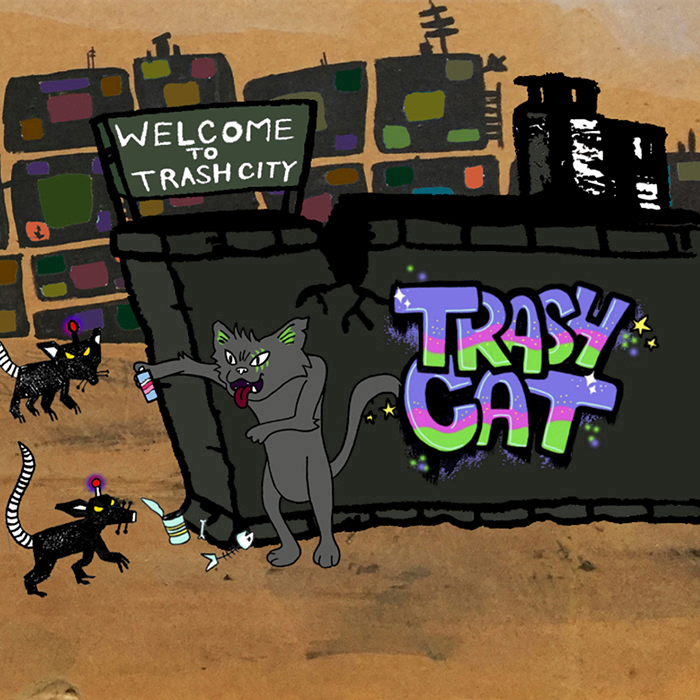 On the rather odd, and almost juvenile introduction to Trash Cat’s debut release, Mary Claxton sets the stage for Welcome To Trash City when she speaks the line “It’s a little rough around the edges, but that’s okay! Because we all belong here.” That track, “Trash City Anthem” provides the canvas for the opening dialogue before trailing off into the repeated whimsical line “I am trash, you are trash, we are trash, this is trash.” Then, Claxton quietly whispers “Let’s go!)”

With that, this unlikely Greeley trio launches into a sophisticated indie-pop record that sounds like someone put Esmé Patterson in a blender with Too Many Zoo’s Lou Pellegrino (that crazy dancing baritone saxophonist who went viral for busking in New York subway stations a few years ago).

Claxton, who plays electric ukulele, while deftly handling the band’s vocals, is joined by baritone saxophonist Hayden Farr and drummer Brian Claxton. Throughout the joyous 11-song record, Farr’s sax work serves as a punchy backdrop to Claxton’s singing, punctuating the track’s basslines in ways that a four-string couldn’t approach.

Welcome To Trash City was, according to the band, “inspired by life, cartoons and geek culture.” The track “Robot Girlfriend” is dedicated to LeVar Burton, while “Full-Time Lover” is dedicated to Bowie (and does harken to the great sax parts of The Thin White Duke’s classic “Young Americans.”) And “Connie’s Song” is dedicated to Rebecca Sugar, the creator of the Cartoon Network’s “Steven Universe,” for which Sugar, as an animator, director, screenwriter, producer and songwriter became the first woman to independently create a series for the network.

That loveable nerdiness comes through in delightful songs that make up an album that Claxton described as “absurd, heartfelt and danceable.”­­­­