Trending Stories from The Marquee
You are at:Home»Album Reviews»Dressy Bessy ‘Fast Faster Disaster’
By Marquee Magazine on June 1, 2019 Album Reviews 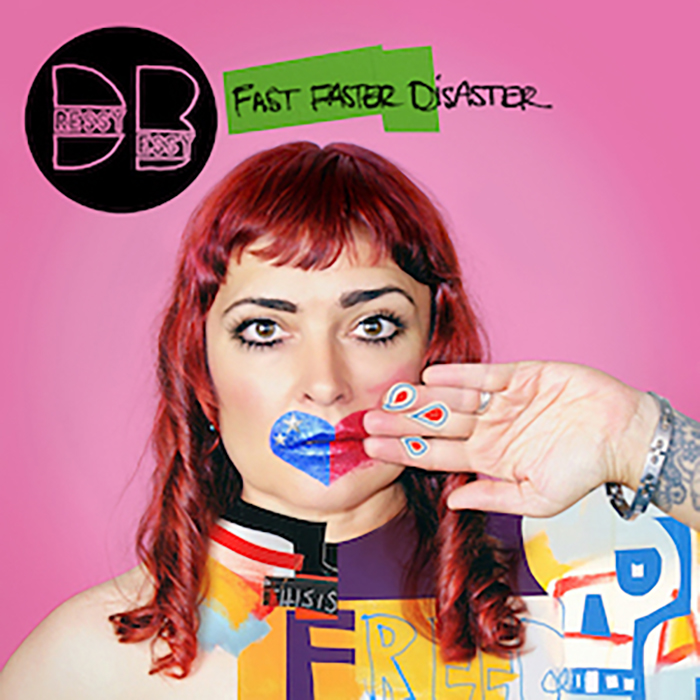 For an astounding twenty years now, Denver’s Dressy Bessy has been cultivating a Wonka-like pop aesthetic that is as bright and colorful as snozberry wallpaper. Now with their seventh studio album, Fast Faster Disaster — which also serves as their 20th-anniversary release — the lo-fi indie-pop darlings hit their two-decade mark with enough bubble gum joy to satisfy even Ms. Violet Beauregarde herself, but they manage to do so while also tackling some serious emotions and circumstances.

“This is the most selfless record I’ve ever written,” said frontwoman Tammy Ealom, who despite their semblance insists that the band is more “semi-sweet, hard-rockin’ friendly smack in the face” than they are bubble gum.

Throughout Fast Faster Disaster, such engaging new tunes as “It’s Not That Hard,” “Fearless,” “Cheerup Teardrop” and “Stay True” reflect on universal emotional foibles with the same pointed insight that Ealom has brought to her lyrics since the band’s early days. “Tiny Lil’ Robots” and “Sweet Medicine,” meanwhile, were inspired by Tammy’s relationship with her daughter, while “Mon Cheri” was sparked by the emotions that accompanied the sudden death of Dressy Bessy’s original bass player Rob Greene in January 2018.

Elsewhere on the new collection, the bittersweet “The Real McCoy” pays heartfelt tribute to longtime friend and label mate (Minus Five/Young Fresh Fellows leader) Scott McCaughey, who had suffered a stroke at the time the song was written. Guitarist John Hill, in his alternate role as a freelance tour coordinator, was actually in San Francisco with McCaughey when he suffered the stroke, and a distressed Ealom wrote the song while following the details back home. She invited several of McCaughey’s friends and bandmates to make guest appearances on the track, including Kurt Bloch (Young Fresh Fellows, Fastbacks), Ken Stringfellow (Posies), Corin Tucker (Sleater Kinney), Andy Shernoff (Dictators), Keith Streng (Fleshtones), and Michael Giblin and Josh Kantor (Split Squad). “I wrote that song in a night and sent it off to numerous friends to add tracks while they were also struggling with the news. We even had people send in tracks that they sang into a phone while listening to the song through speakers,” Ealom said.

Fast Faster Disaster also features another memorable tribute in the form of the band’s fresh take on “What Do I Get,” originally by Brit pop-punk pioneers the Buzzcocks, whose leader Pete Shelley passed away while Dressy Bessy were finishing the album.

Coupling joyful vibes and heart-felt sentiment is Dressy Bessy’s modus viventi but never before has the group so splendidly hit that balance, as it has here on Fast Faster Disaster.