Trending Stories from The Marquee
You are at:Home»Brandon Daviet»Judas Priest
By Marquee Magazine on August 1, 2009 Brandon Daviet, Features, Interviews 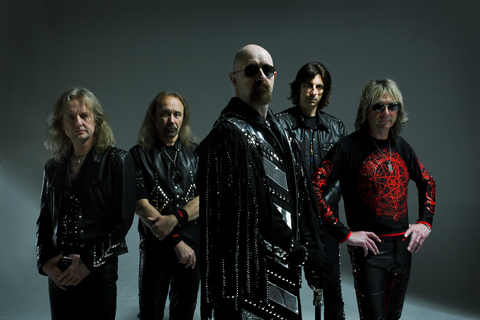 The summer of 2009 will go down in the annals of rock and roll as the summer that many bands — mostly as a treat to their fans and probably to stroke their own egos a little — took to the country’s sheds and amphitheatres armed with set lists featuring classic albums from their back catalogs. Some bands are pulling out all the stops, like Steely Dan, who are playing different albums on different nights. Some bands have found the challenge a bit daunting — like Aerosmith, whose decision to play Toys in the Attic was slightly abbreviated after singer Steven Tyler found out he needed more rehearsals to pull off the album’s finale “You See Me Crying.” And that’s in addition others, like Ratt and Mötley Crüe, paying tribute to their own classic albums.

Judas Priest seems to be having the least trouble with their live tribute to the 30-year-old metal classic British Steel. So far there have been no problems reported from the road, but that’s no surprise for one of the most stable, long running bands in metal. The Marquee had the great honor of talking with the “metal god” himself, Rob Halford, who was attending this year’s E3 Expo in Los Angeles, shortly before the band hit the road. The singer’s excitement surrounding the performance of British Steel was easily evident in his voice.

“It’s remarkable that 30 years have gone by, really, and it’s a great way to be able to recognize the importance of the album,” said Halford. “In today’s world, more than ever, you have to have a story to tell, you can’t just go out and play. You have to something that has more of an event-type of feeling. And it’s good for everybody; it’s good for the band but most importantly, we have never played any Priest release live in its running order.”

For younger fans the true importance of British Steel may not be as clear as to fans who were actively banging their heads when it was released. Featuring classic fist-pumping anthems like “Breaking the Law” and “Living After Midnight,” British Steel, released on April 14, 1980, was a harbinger of what the next decade of music would look and sound like in many ways, from hair metal to thrash. “Surely some people cite Judas Priest as being inspiration for that type of music,” said Halford. “Thrash metal, if you listen to the ways the guitars are playing in rapid fire succession, it really is quite derivative of what Glen and K.K. [Glen Tipton and K.K. Downing, the band’s lead guitarists] were doing. That, coupled with the big American explosion with metal … there was like a five year-plus solid onslaught of thrash, hair metal and whatever you want to call that and it was great that we were at the event point for that type of thing to explode.”

One thing Judas Priest isn’t doing is re-releasing British Steel to capitalize on the tour. The band seems to realize that the record stands strong in its original form. (Although, for completists, there was a re-mastered version with bonus tracks released in 2001)
Instead, what the band is doing is releasing a new live album A Touch of Evil: Live, which features a track list that stays away from the anthems and includes some of the heavier material in the band’s arsenal. The release represents the side of Judas Priest that helped Halford earn his title as the “metal god.” “If you’ve seen the track listing as it stands, you can see it’s a very potent and strong display of the band’s metal power,” said Halford. “The main reason behind the choice of these tracks is we have never released these songs before for the real “metal heads” and it has turned out to be a much stronger record than we thought it might be, with the opening blasts of ‘Judas Rising’ right to the final track it is just a relentless sledgehammer of information.”

For Halford, post-tour activity, he said, will be centered around the further evolution of his own record label Metal God Records, which will hopefully keep him in the game for years to come. “Thanks for asking about that, we’re a new metal company and it’s just a big, elaborate plan that is intended to keep me busy during my golden years in metal,” said Halford. “Right now we have a clothing line that is doing well and I have always wanted to be involved hands-on with a label that’s going to promote and explore new talent in the metal world, so that’s what we will be doing.”

Recommended if you Like:
• Iron Maiden
• Black Sabbath
• Queensrÿche