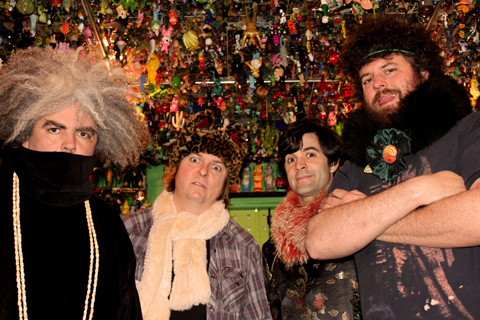 Any emerging band looking for a blueprint on how to continuously create genre defying music while staying true their sound should look no further than the Melvins.

These lords of experimental rock and barons of sludge metal have been giving the world some of the most interestingly weird rock for 30 years, with no signs of slowing. Lead by master of eccentricity Buzz Osborne, or King Buzzo as he’s affectionately known, and Dale Crover, the hardest working drummer in rock n roll, the duo have a creative drive that is unrivaled. Putting out nearly an album a year, the Melvins’ lust for exploration and creation is insatiable.

Their 30th anniversary tour touched down at Summit Music Hall in downtown Denver Monday night with special guests Honky, from Austin, Texas. Honky is a superboogie rock outfit founded by long time Butthole Surfer bassist JD Pinkus, accompanied by Bobby Ed Landgraf on guitar. Lacking their drummer Michael ‘Night Train’ Bruegge, Crover filled in, showing his versatility and reaffirming his reputation as the hardest working drummer in the biz. Honky transformed the Summit into an extension of Texas with their  lo-fi, hi-sleaze rock – as they liked to call it. Pinkus and Landgraf looked like the rebel sons of ZZ Top with matching cowboy hats and long gray beards, sans the famous sunglasses. With a polished silver Flying V bass guitar, Pinkus delivered his hard hitting, southern rock to the delight of the crowd. Traces of Pantera, Fu Manchu and ZZ Top could be heard in their sound, and they showed the crowd that good things can and do come out of Texas.

The Melvins started their set the way they have for the last few years, with Tony Iommi’s famous coughing intro to “Sweet Leaf” by Black Sabbath, extending the coughing for nearly a full minute before the band emerged – in true Melvins style. Osborne and Crover may be nearly 50 years old but their shows still exude a presence of intensity and purpose. Clad in what looked like a futuristic black muumuu, and his gray hair still defying gravity and full of life, King Buzzo wasted no time and began with “Hag Me” off their 1993 album Houdini, a song written 20 years ago but one that exemplified the band’s signature heavy, sludgy metal.

The Melvins have had only two consistent members in their entire 30 year tenure – the dynamic duo of weird – Osborne and Crover. In recent years, they have been joined by the members of Big Business, adding a consistent bass player and a second drummer to their ever evolving sound. This tour was no exception. Coady Willis accompanied Crover on drums, and with infused mirror-image drum kits, the two fed off each other and melded so well that the layered sound they created moved with the music and one would be hard-pressed to know it was two drummers at all. Pinkus of Honky filled in for Jared Warren on bass for reasons unbeknownst to this reviewer, but nonetheless executed his role with authority.

The set was a veritable cornucopia of the Melvins’ discography. Moving from the evilly jazzy “Let it All Be” to the droning sludge of “Hooch.” “The Water Glass” off 2010’s When the Bride Screamed Murder was the perfect song for crowd participation, as it reminded of a pep rally when the pep squad pumps up the fans for a big game. Crowd favorite “Lizzy” off Houdini,  enlivened the venue with its bi-polar sound; starting down tempo with King Buzzo’s soft vocals, jazzy guitar, then changing abruptly into heavily distorted guitar while the signature growly voice of  King Buzzo and dueling drums moved the crowd into a frenzy.

Osborne wasted no time on stage, never talking to the crowd, only stoically playing his signature silver Gibson guitar as a fan behind him waved his unruly gray hair in contorted rhythms with the music. While the Melvins never disappoint and always bring energy to their shows, the set was a little too reminiscent of recent years, excluding their “Evil Cocktail Jazz” tour last year in support of their album Freak Puke. If one was seeing the Melvins for the first time, this show would have been amazing, but as one who has seen them a handful of times in the past few years, it was just good. But the Melvins’ good, is still better than the best of most.