Trending Stories from The Marquee
You are at:Home»Brian F. Johnson»Margot And the Nuclear So and Sos
By Marquee Magazine on November 1, 2010 Brian F. Johnson, Cover Story, Features, Interviews 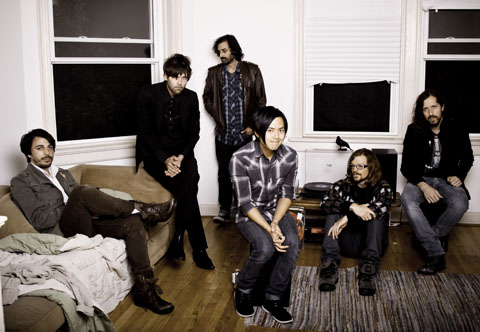 There is something very comforting about Margot and the Nuclear So and Sos. Even on some of their most anxiety ridden material, there’s a warmth and understanding that perfectly compliments autumn, and once led a Marquee writer to refer to the band’s sound as “scarf rock.”

It was a fitting description then, when the So and Sos were a whole different cast of characters, including the female keyboardist named Emily Watkins who, to the uninitiated, was always mistakenly referred to as Margot — there was no Margot in the band. Never has been. Margot supposedly  refers to the character played by Gwyneth Paltrow in the Wes Anderson film The Royal Tenenbaums. It turns out the lead So and So, Richard Edwards, is a bit of an Anderson fan, and before Margot, he fronted a band called Archers Avenue — the address of the Tenenbaum residence in the movie. Additional side note: According to internet lore, the Anderson connection runs even deeper in the Margot fabric. The band’s 2008 release Animal! is alleged to be named after Anderson’s favorite Muppet; and, So and So violinist and lap steal player Erik Kang formerly played in the band Tiara, which was allegedly named after Anderson’s niece.

It’s most likely all bullshit, but it doesn’t really matter. What is striking is Edward’s ability — like Anderson’s — to blend dry humor and poignant portrayals of flawed characters.

The handle of scarf rock still fits today, even with the change in So and So personnel. In 2008, Margot and the Nuclear So and Sos offered a dual release, Animal! and Not Animal, in what initially appeared to be a genius mediation of issues between Margot and their label at the time, Epic. Animal! was the band’s preferred version, while Not Animal!, which had 12 songs total, five of which were on both releases, was the label’s preferred album.

“There was a lot of frustration for how that record and how the touring for it went,” said Edwards in a recent interview with The Marquee. “The way I dealt with it, was I moved to Chicago.”

In addition to that drastic move, the machine that had grown from touring with an eight-piece band had started to become bigger than was necessary. “The band was too big. It was difficult to tour like that. It was financially difficult and it was becoming stressful personally. So, I moved to Chicago and I started playing around town and at the studio with Brian Deck — the guy who produced this record and the Animal! record — not knowing if it was Margot, or if it was just something I wanted to do. I just wanted to play music. I didn’t want to sit and stew in the fact that Animal! didn’t go exactly how we wanted it to.”

Fast forward a bit, and Margot and the Nuclear So and Sos have re-emerged with an entirely new lineup. Edwards and bassist/vocalist Tyler Watkins are the only original So and Sos still in the band, and the rest of the So and Sos include the aforementioned Kang, drummer Chris Beck, guitarist Ronnie Kwasman and Cameron McGill of Cameron McGill and What Army.

Edwards has a history of recording albums late at night, in the dark — a habit, he said, that came from the pre-Animal! days when the band was sneaking into studios late at night to record. Once the new members were settled and it was time to record again, Edwards and company, with producer Brian Deck at their side, began recording a very new and different album for Margot. “Everything was done pretty much live,” Edwards said. “We recorded some stuff in bits, but we had done a lot of stuff live, playing late at night all together, instead of building tracks from the ground up, which seems to be the way the old Margot worked.”

With the resulting album, Buzzard, Margot has in no way thrown out all of its chamber pop roots, but it certainly has relocated its emphasis on guitar, and stepped closer to rock than the band ever has before. “These are the songs that I would have written in high school and college had I kind of known to some degree what I was doing,” Edwards joked. “There is a lot of guitar and bass — kind of grimy pop songs, you know?”

In addition to the writing and recording, the band, now without their partnership with Epic, started Mariel Recording Company and, along with Red Eye Distribution, are handling the label duties for Buzzard, which Edwards said lead to some of the hardest work of his life. “I don’t see myself as a music business whiz, but Red Eye said it was the most organized self-release that they’ve worked on. You get almost as proud of that as you do when Spin writes up the record really well. It’s nice to know that we have other marketable skills,” Edwards said, laughing. “I don’t know how marketable the music skill is.”

• Dear and the Headlights

• Cameron McGill and What Army