Trending Stories from The Marquee
You are at:Home»Brian F. Johnson»Leftover Salmon
By Marquee Magazine on May 1, 2012 Brian F. Johnson, Cover Story, Features, Interviews

No more pussy footin’ around about it. Leftover Salmon is no longer on hiatus —that ended years ago. And this year they will officially shelve the “reunion” status they’ve been playing under since they started dabbling in shows again in 2007.

No, in 2012 Leftover Salmon doesn’t need a qualifier for their status. For the first time since 2002, the band is simply that — a band — firing on all cylinders with a tour schedule of more than 60 dates lined up for the year.

“Yeah, were a full-on band again, man,” said guitarist and Leftover Salmon co-founder Vince Herman, during a recent interview with The Marquee.

Herman — never one to sound like Eeyore in the first place — was particularly lively, when The Marquee caught up with him while on a tour stop in Atlanta. It was the first day after a few weeks on tour when the group had time to stop and do laundry, and aside from the struggle of getting the machine to work, Herman seemed down-right giddy about the prospect of clean clothes.

But that nugget of joy was minor in comparison to Herman’s other reasons for being so jolly. The lead singer, who in recent months has dropped some serious weight and is working hard to keep it off, seems to have signed a new lease on life that is showing up in his health, his love life, and most importantly for us, in the band that he helped start back in 1989.

“It was time to shit or get off the pot,” he laughed. “You can only do the reunion stuff for so long before people start saying, ‘Well, are you a band or not?’”

Herman was quick to point out that he and his Leftover bandmates will continue to pursue their side projects, but that for the first time since the hiatus, Salmon is the main focus.

“I’m going to keep Great American Taxi going and I want to keep playing with my kids. We don’t want to put all of our eggs in one basket. We all have side projects that are worth maintaining and it brings other energy to the band when you can get out and do other things, you know? But man, this has just been too much fun,” he said.

All of that fun has resulted in Leftover Salmon’s first album in eight years — Aquatic Hitchhiker, which will be released May 22 on the band’s own label LoS Records. The album, which was recorded in Denver at Mighty Fine Studios, and in Portland, Ore. at Cloud Sound Studios, was produced by Steve Berlin of Los Lobos, and Herman said that they had the unique experience of having Berlin involved in some of the writing sessions for the album.

“This was way more collaborative than anything that we’ve ever done before. In the past a lot of songs came pre-assembled, where the writer kind of had an idea of what they wanted it to sound like. For this process, we were writing for the record and we had some writing sessions where we got together and hung out for a few days and generated material. That was a really different process for us and having Steve there for those sessions really helped facilitate a lot of great ideas too,” Herman said.

As with past Leftover Salmon albums, Herman and mandolin virtuoso Drew Emmitt shouldered a large portion of the writing duties, but Aquatic Hitchhiker also features a song by bassist Greg Garrison, “Gone For Long,” and two songs, including the title track, by banjo shredder and Leftover’s newest member, Andy Thorn.

Herman gave Thorn great praise and admitted that the addition of the newest and youngest member of the group has a lot to do with the band’s new energy and enthusiasm. “Andy coming into the picture is definitely a major part of this,” said Herman. “He’s just a really talented kid. It’s phenomenal the shit he can play. It’s pretty out of hand.”

Leftover Salmon was one of the first bands that Thorn saw live at the age of 15, when he was growing up in North Carolina, and it’s clear in his playing that Leftover’s founding banjoist Mark Vann — who passed away in 2002 — was an integral influence on Thorn’s style. But Herman said that there is something more to Thorn’s style that the group is absolutely relishing. “It’s his willingness to go out and play really weird shit, while sticking to the real traditional bluegrass, which makes him really Mark-like. You never know what way he’s going to go on a solo,” Herman said. “You know we’ve all evolved as players by doing our other projects — it’s really expanded our ears. And so when you put that together — the songs, the new material, the players developing a bit more — it just kind of ends up that we’re a better band than when we dropped off, especially with Andy Thorn in that ‘BanJovi’ position.”

While the band was cutting the album in Portland, they were joined by a crew from iClips.net, which filmed and is now releasing a five-part documentary on Leftover and the creation of Aquatic Hitchhiker. Obviously influenced by the esoteric IFC Channel sketch comedy show “Portlandia,” the documentary bares the name Salmonlandia, and is being released as a five episode series on iClips.net. The series includes five download tracks, three of which are on the new album, and two of which are available only through iClips.

“Any more, trying to figure out what an album is, you have to expand, I guess,” said Herman. “You’ve got to throw some other things in to get it done.”

One of the things that Salmon will be throwing in for local fans is an unprecedented CD release party. Never ones to be satisfied with an ordinary soiree, Leftover Salmon will be taking over the Santa Fe Arts District the weekend before the CD is officially released, to host a free afternoon show in the middle of the 700 block of Santa Fe Drive in Denver. The party, which runs from 1 to 6 p.m. will also serve as a benefit for Conscious Alliance.

“We’re hoping that it’s an absolute fucking mess and there are way too many people,” Herman said. “It’s a great way to celebrate where we’re from and to celebrate the new record. A party in the streets? You know it doesn’t take much to convince me to do something like that.” 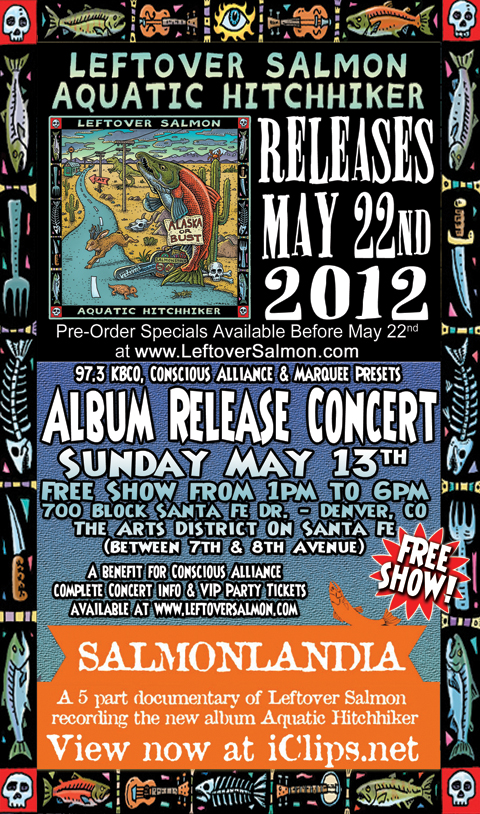