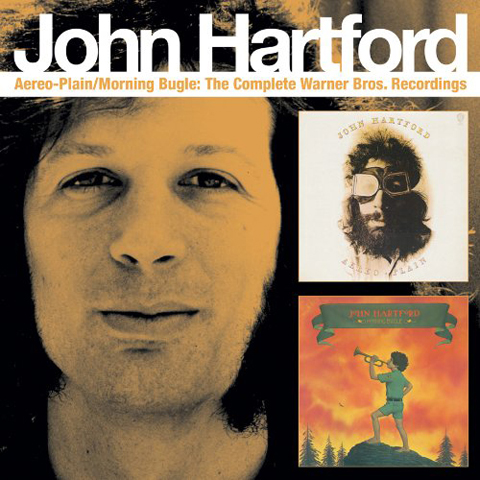 Sam Bush once said that “Without Aereo-Plain, there would be no ‘newgrass’ music.” And he’s right. It’s that crucial of an album.

By the time Aereo-Plain came out in 1971, John Hartford had already secured his place in music history. He had written, recorded and released the song “Gentle On My Mind,” to little fanfare in 1967. But the following year, Glen Campbell took notice of the song and re-recorded it. In 1968 the track brought home four Grammy awards (two of which went to Hartford) and, due to the massive amount of royalties, he said later in life that the tune bought him his freedom.

Hartford was all about that freedom and following the success of “Gentle On My Mind” he moved back to Nashville from L.A. to be closer to the Mississippi River, where he would go on to be a highly respected steamboat pilot and river historian. He signed a contract with Warner Bros. and went on to record two of the most influential and groundbreaking albums in bluegrass.

Aereo-Plain is a perfect album. Period. Hartford assembled a super-group of musicians for the project, which included Vassar Clements on fiddle, Norman Blake on guitar, bassist Randy Scruggs, and dobro player Tut Taylor. Together, those musicians could have made an incredibly solid and traditional bluegrass album, but the magic of Aereo-Plain was that it wasn’t traditional. Produced by David Bromberg, Aereo-Plain was technically bluegrass music, but it was bluegrass that was being played differently, and with different subject matter than anyone had spun it before — for the first time, a hippie vibe had come into bluegrass.

The album opens and closes with the Albert Brumley song “Turn Your Radio On,” but it was on tracks like “Steamboat Whistle Blues” where Hartford “opens up the window and smokes a little bit,” and the obvious “Holding,” that gave a counter-culture spirit to the album. However, it wasn’t all pot references and sticking it to the man that made Aereo-Plain great. There was a whimsical side to songs like “Back in the Goodle Days” and “Tear Down the Grand Ole Opry” that previously would have been considered almost blasphemous in bluegrass circles. The track “Steam Powered Aereo Plane” (which, note, is spelled differently than the album title) is both fun and musically intricate, with an amazing banjo part that has become a staple for modern players. And amidst all of that goofiness and joy, Hartford showcased one of his best songs ever, the instrumental “Presbyterian Guitar,” which is tear-provokingly gorgeous.

While the album is now lauded as being a classic, at the time, the public didn’t think so. It hit number 193 on the Billboard 200 Chart, and that “poor” showing convinced Warner Bros. to not promote Aereo-Plain’s successor, 1972’s Morning Bugle.

Bugle featured Hartford, Blake, and jazz bassist Dave Holland. Songs like “Nobody Eats at Linebaugh’s Anymore” and “Bye-Bye” continued Hartford’s fusing of hippie ideals into the traditional framework of bluegrass.

With this Real Gone label re-release, the two CD, 35 track release devotes a CD to each of the albums, and tosses in four unreleased tracks from each album, for a total of eight previously unreleased songs. One of those previously unreleased tracks is “Flower Power Died,” which serves as Hartford’s eulogy for the loss of hippie innocence. Andrew Vaughan, Hartford historian, provides the liner notes and the Hartford family contributed photos from John’s private collection.