Planting his roots: The Polish Ambassador returns back to Earth 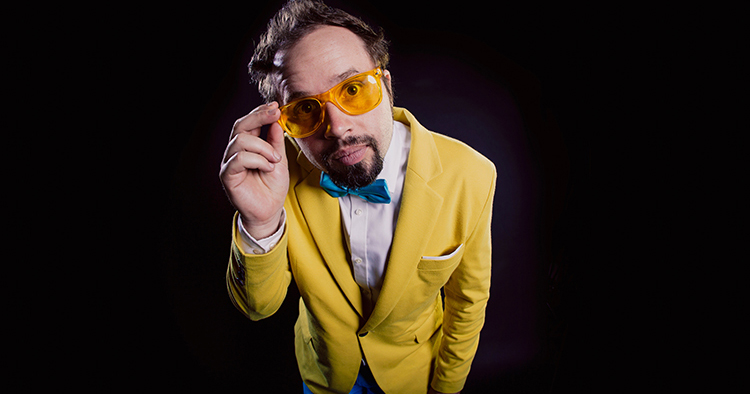 Though he may not be a foreign dignitary from the Eastern Bloc, David Sugalski, a.k.a. The Polish Ambassador, has most certainly become an emissary for Mother Earth. But this was not always the case. The Jumpsuited One — as he is referred to for the retro-80s, ski onesie he dons during live performances — has seemingly come back down to Earth after a career of crafting cosmic space sounds. Whatever was learned during this galactic journey has now influenced him to incorporate an altruistic and philanthropic nature into the culture of his electronic dance music.

Sugalski’s more mundane roots brought him to the University of Colorado at Boulder, by way of Philadelphia, where he got a degree in business. This led to a short-lived career before discovering he had an affinity for music production. But it would be another eight years before he found his true calling. One in which he could use his platform as a successful musician to give back to the Earth through community and environmental activism.

“It came from the feeling of plowing through cities and not really taking the time to get to know people and get to know the land,” Sugalski said during a recent interview with The Marquee. “Action Days gave us an opportunity to connect with fans that fed our hearts and souls in a really unique way that being on stage a lot of times can’t.”

ActionDays.us is a program that Sugalski started in which he invites fans to join him the day after he plays a show, to participate in community outreach projects. He started the program in 2014, on a 30-day tour, paired with 30 Action days to match. But these days, Sugalski says the projects are a little more focused and average about ten per year. Since its inception, the program has cultivated somewhere between 100-150 days of community and environmental activism. These projects promote a philosophy of permaculture and natural building, typically involving construction, gardening or sometimes even rogue gardening — like the time he gathered a crew to plant in a vacant lot in Portland.

“We turned it into a garden in the span of about five hours and it was fucking amazing,” Sugalski said. “Just witnessing that and witnessing the transformation of many hands just doing a little bit of work was extremely powerful, but then we got word two weeks later that a bulldozer came in and plowed it all down.”

Despite the one failed attempt, Action Days most often supports projects that a community is already working on that could use the boost of anywhere between tens to hundreds of people for a day or two, and often fans turn out in droves.

“We did it at Envision Festival in Costa Rica and so many people wanted to be a part of it that we had to separate it into three events at three different elementary schools. People went and there were all sorts of gardening projects that happened, that was so special,” Sugalski said.

At face value the Polish Ambassador looks like an act found in Aspen at an aprés nightclub. But over the course of his 11-year run as a DJ, Sugalski has parlayed this façade into an earnest, bohemian movement that wants fans to party, but also be environmentally conscious. And he gives a lot of that credit to the Colorado crews of Sonic Bloom and the Cervantes’ family.

“A lot of the people that come to Sonic Bloom are the same people that came up with my project and a lot of the other similar projects there,” Sugalski said. “When you look at a lineup like Sonic Bloom, you’re not looking at a lineup with festival curators that are interested in all the cool EDM trends. You see people like myself, Random Rab, Bluetech, and other artists that have developed these familial fan bases over more than a decade. And I think that’s a testament to the quality and to the reputation that Sonic Bloom has.”

For avid fans, there has been a distinct progression in the sound of The Polish Ambassador that likely coincides with his activist involvement. Of course every artist matures and develops their sound over a decade, but you can almost connect the dots between when the music transformed in accordance with his devout environmentalism. Album themes and titles transition from Future, Sex, Computers to headier, earthier names like Ecozoic and Terra Bella. While early Polish Ambassador sounded like ’80s, Kraftwerk-inspired synths layered over future bass, his iterations as of late incorporate more down-tempo, organic world-music with a little more depth. It’s almost as if, over the course of a year or two, Sugalski went through some sort of epiphanic spiritual transformation.

This maturation comes through when asked about his record label’s inaugural music festival in Taos, New Mexico later this year, called Family Gathering, and why he decided to cap festival attendance at 1,000 people.

“I don’t know, I’m getting older — I’m 36. When I was 18-25 I wanted to go to the big party festivals, but now that I’m getting older I have a homestead, I have dogs, cats, a girlfriend, I have adult responsibilities that I’ve managed to create for myself, so for me, it’s like, I want to curate the environment that I actually want to be in.”

But this is not to say that the Polish Ambassador has gone soft and is not willing to throw down some heavy beats, or mind-altering glitch and ‘psy-fi funk’ as his website describes it.

For Sonic Bloom, the Jumpsuited One is going to dump heaps of new material during his headlining set, but he also said that he’s going to pull out some relatively classic Polish Ambassador tracks too.

“At a festival like Sonic Bloom, there’s gonna be a lot of people at the set and I want to give them something fresh,” he said. “I know there are the hardcore fans that want to hear their favorite songs, and I totally acknowledge that and love it. So, half the set is brand new material that no one’s ever heard and half of it is old stuff that’s reworked in a new and exciting way.”