All Them Witches release self-titled album, trim to a trio and thoughtfully hope they don’t find themselves 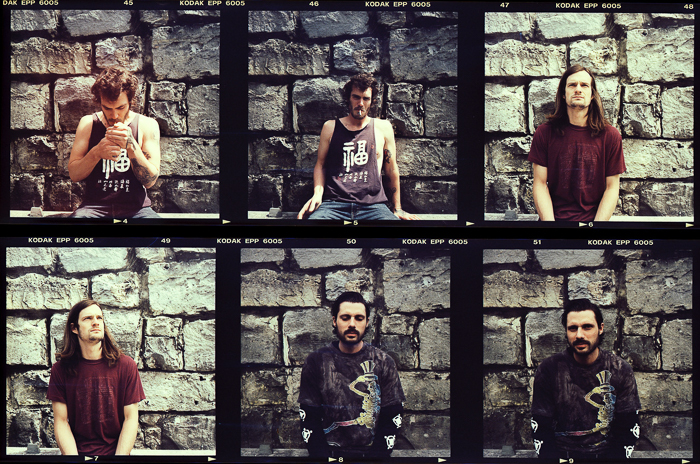 The opening moments of All Them Witches’ new self-titled album sounds like the start of a band practice; or more directly, it sounds like the start of a practice recorded on a cassette with a single mic. There’s a lo-fi fuzzed out sustain, a quick echoey smack of the snare — sort of the equivalent to a band cracking their knuckles before “getting into it.” But by the 10- second mark, the notion of a demo recording dissolves and All Them Witches launch ferociously into the opening track “Fishbelly 86 Onions.”

It gives the perception that listeners are in the room with the Nashville psych rockers, watching and listening to them bang this thing out, and it sets the stage for a very live sounding album — the band’s fifth LP. “I wanted it to sound like practice is starting, the band is finished warming up. This is what it would sound like if we would release the demo of this practice and then it just explodes into hi-fi with the snare,” said guitarist Ben McLeod, during a recent interview with The Marquee.

On their last release — quite possibly one of the best titled albums of the last decade, 2017’s Sleeping Through The War — the group had the famed producer Dave Cobb with them in the studio, and so for McLeod, who produced this one, the goal was to take an entirely different approach. “We love everything that Dave [Cobb] did with Sleeping and since I was producing this one I was like, ‘Well, how do I make this cool without just trying to do what he did?’ At the time that we started writing, we were like, ‘Let’s just all get in a room and play songs and let’s not take it any further than that.’ Everything that listeners are hearing, aside from the vocals, is all pretty much live. I mean there’s a couple guitar things — acoustic guitar overdubs and some guitar solo overdubs — and vocals, but other than that it’s just us in this huge room in this cabin just playing. A lot of the takes are the first and second takes. It was very primitive and very raw. Sleeping was definitely more refined and we definitely did a lot of overdubs and me, personally, I wanted to go back to the feel of like Lightning At The Door which is probably my favorite album that we’ve done and I wanted it to feel like that — like where we’re a new band and everyone is a little bit nervous and everyone is a little bit vulnerable and we’re not going to hide behind endless overdubs to get our point across. That was our goal,” McLeod said.

Mission accomplished. All Them Witches at its core is a collection of dark, intense blues songs. Sure there are psychedelic wanderings, massive rock riffs and subdued yet angst-filled movements, but at its foundation, it’s still the blues. American Songwriter called the record a 52-minute furnace blast, adding “there are plenty of bands trying to capture this distressing atmosphere of dread, uncertainty and slowly enveloping darkness, but few do it with the class, subtlety and controlled intensity of All Them Witches.”

McLeod explained that it’s not necessarily by design that the band comes across that way — that they didn’t have some band meeting that concluded with a goal of sounding dark. “Fortunately for us whenever the band is together in a room writing songs, playing music, playing a show — the thing we have going for us is that it’s always going to sound a bit dark. Everything brewed together is going to have that feel. We don’t have to try for that to happen, which I’m very thankful for. It is genuine and we wanted this album to be extremely heavy not in the sense of like massive riffs or like stoner riffs, or distortion and stuff, but more like heavy intent.”

He went on to explain that to him, The Beatles song “I Want You (She’s So Heavy)” is one of the heaviest moments in music history. The slow, building intensity of the song’s climax never resolves and leaves listeners feeling almost lost when it finally cuts off. “That’s what we wanted to capture on a lot of the songs,” he said.

In addition to McCleod, All Them Witches features bassist vocalist Charles Michael Parks, Jr., drumming beast Robby Staebler and the new album also includes keyboardist Jonathan Draper, who replaced Allan Van Cleave earlier this year just in time for the new record. But, with the recording now behind them, All Them Witches has shed Draper from the lineup, and the band will be returning to its roots as a power trio. “Allan left the band after our last tour in November,” explained McLeod. “We kept everything super quiet because it was really, really a shocker for Parks, Robbie and myself. We kept everything on the down low and then hired [Jonathan] Draper for the record because we didn’t want to lose the sound of the keys. But since then, he is no longer with us and we’re going to be just touring as a trio. We premiered the trio at Desert Daze and Aftershock festivals [in October]and it was a blast. For the time being, and for the next couple of tours, we’re definitely going to be just a trio. There’s a certain new kind of rawness. I don’t know how many more times I can use that word, but to me it’s how the band has been trying to sound for a long time. We started off as a three-piece, Our Mother Electricity [the group’s debut]is all three-piece and the keys fell into place and I can’t completely answer if we’ll go back to keys at some point, but we all just kind of follow our gut.”

Following their gut, McLeod said, is way better than following any formula. The group, who on their last album sung the line “I am becoming increasingly aware,” on the song “3-5-7,” and followed up on this album with the line “I am waking to the sound of games I have never known in a world of shame” on the track “Diamond” seems to approach rock with the thoughtful analysis of a Zen Buddhist. But, like a Buddhist, they’re focused on the journey, not the goal of Nirvana, and therefore, McLeod said, they haven’t found themselves yet — and he kind of hopes they don’t. “I don’t think we’ve ever found our sound and I kind of hope we don’t because it’s kind of like once you have a sound how many records can you actually make that are interesting? I like the fact that the three of us are constantly on our toes we’re always like ‘Oh we’re doing this now? This is sick, why didn’t we do this before?’ as opposed to ‘People will like this because it sounds like the other record,’” he said. “We put out music and we tour and we sell awesome merch for the fans, but there’s this whole other side of it that is for us exclusively — and that’s just the joy of playing and being creative. There’s no formula that we stick to. The formula is a very, very easy way to not enjoy your favorite thing in the world.”