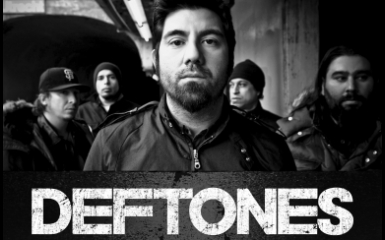 The Deftones tour to promote their new album Koi No Yokan rocked Denver last Friday night at the Fillmore Auditorium.

A line three blocks deep threatened at the start, but once all those people piled into the Fillmore, it was worry wasted. The general admission floor was only half-filled until mid-performance of opening band Scars on Broadway, who by the way, have no business opening; they should be headlining their own tour with their flawless White Snake flow into every song. Scars on Broadway, comprised of Daron Malakian and John Dolmayan of System of a Down opened the show with an ear-splitting bang. Their showmanship warmed the crowd with Malakian spinning in circles repeatedly and singing their radio hit, “They Say” and “We’re all on Drugs.” They needed no fog machines for this show; from the moment Scars on Broadway walked on stage and through the Deftones performance, the auditorium was filled with smoke to enhance the experience in ways that fog machines simply cannot provide.

When lead singer Chino Moreno jumped on stage the crowd breathed a collective sigh of relief-he lost weight. Moreno was looking and sounding better than ever.

Moreno wooed the audience energetically, dancing from atop his pedestal of amplifiers and intensifying all the favorites like “My Own Summer (Shove It),” “Back to School (Mini Maggit),” and “Change (In the House of Flies).” On the slightly more mellow side, “Knife Party” and “Digital Bath” graced the crowd along with “Passenger,” -sans Maynard James Keenan-which Moreno performed flawlessly as a solo rather than a duet. The Deftones keep the spark in their lives by having guest singers on their albums ranging from the aforementioned Keenan (Tool, A Perfect Circle) to guitarist Stephen Cunningham’s wife, Annalynn, on “MX” to “If I Could” with Tech N9ne. The Deftones are truly experimental and diverse.

“Tempest” from their forthcoming album Koi No Yokan was in the mix as well. The name translates to “Premonition of love” in Japanese and is set to be released November 13. “Leathers” and “Tempest” were released earlier this month as singles.

The roaring crowd stood still during only one song through the entire night- “A Song for Chi.” The mosh pit dissolved to waive flags alongside neighbors holding their lighters up high. During this moment of silence the light emitting from the crowd rivaled that of the stage. The Deftones’ loyalty to bassist Chi Cheng is something modern day lovers should take a lesson from. Since his car accident nearly 4 years ago, Cheng has been in recovery in a semi-conscious state; able only to move his legs on command but unable to speak or move otherwise. The Deftones recruited Sergio Vega to stand-in for Cheng, and the band and fans hold complete faith that Cheng will return to the stage again some day.

At times it was unclear whether Moreno was singing at all because the crowd was so boisterous and free spirited in their rendition of the lyrics. His voice and theirs blurred indistinctly as one for the chorus of several songs. Moreno’s melodious, unrivaled and precise voice can’t be contested; whether nearly whispering his lyrics or screaming for minutes on end it’s mesmerizing. No one can make screaming sound entirely satiating, then transition back to a whisper smoothly, undamaged and seemingly effortlessly like Moreno; so full of charm and charisma.