Trending Stories from The Marquee
You are at:Home»Cover Story»Odesza the Online Sensation Has Evolved into a Live Cinematic Spectacle
By Marquee Magazine on December 1, 2015 Cover Story, Features, Interviews, Michael Chary 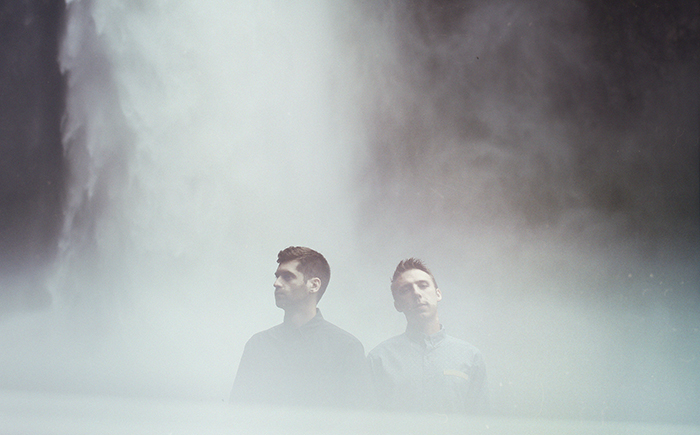 The advents of modern technology have, undoubtedly, shaped the ways in which society creates, shares, and consumes music in our era. The sonic experience has become seemingly limitless in the digital realm and it has allowed music to be shared instantaneously across the world. No one is more familiar with this phenomenon than Clayton Knight and Harrison Mills, the electronic duo more commonly known as Odesza.

What started as two seniors at Western Washington University making electronic music as a hobby, has quickly evolved into an internationally acclaimed touring act. When mutual college buddies serendipitously introduced the two, they immediately bonded over their uncommon musical taste compared to the Pacific Northwest’s indie and rock-centric music scene. In 2012 they released their first album, Summer’s Gone, online and it quickly started gaining traction on music streaming platforms like SoundCloud and Hype Machine, topping charts and garnering an unprecedented amount of plays.

Their ethereal, dreamy hooks and samples, punctuated with cinematic drum and bass lines provided a fresh sound to the often trite and predictable four-on-the-floor, bass drop formula that mainstream EDM is known for in the U.S.

“Music in general I think, when you go and see it live, tension and release is what it’s all about, so I think that will always stay in the forefront. But we just try to find ways to create moments throughout the set that don’t necessarily need to be like every single thing playing at once,” Mills told The Marquee in a recent interview. “Maybe it’s just everything dropping out and all you hear is a horn section really loudly – that can create a really cinematic and impactful moment as much as a big drop could.”

Odesza’s unique approach often combines disparate euphonic elements, seemingly at odds, but without sounding contrived. Atmospheric, layered samples are met with hip-hop 808s and garage-influenced, shuffling hi-hats. The nouveau style on their debut brought massive attention and Odesza followed up with the release of their second LP, In Return, which brought with it two-and-a-half years of extensive touring across the world. Their sophomore album continued to retain those deep, pensive elements, but with more of a focus toward songs geared for high-energy live performances.

“We’ll always be in love with ambient sounds and floaty, airy, mellow music, so that will always be a big part of what we do, but definitely we have been going a more cinematic route when it comes to the music we’re creating,” Mills said.

The duo recently re-released a deluxe edition of In Return to highlight that cinematic nature of their live performances. Mills stressed how much priority and effort he and Knight have put into making the Odesza live experience an exciting and dynamic one. Over the past year, the two have incorporated not only live instrumentation on their parts, but have also invited local bands to join them onstage, like the USC marching band at Coachella.

“I think that’s something we’ve always wanted to incorporate to make our shows more theatrical and just have massive moments in our set where it feels like, I don’t want to say like a play or anything, but just where things shift and, oh, now this whole section is a drum line and now this one’s an orchestral section,” Mills said. “We actually went back and made eight versions of our older songs that have all these huge moments that we wrote just for playing live and I think that’s what makes our live show extra special for fans because they get to hear new, bigger, grander versions of tracks off our album.”

Despite their swift rise to fame that sounds more like something out of a movie script, Knight and Mills have worked incredibly hard to bolster their momentum. Taking minimal breaks, the duo has essentially been on tour since they gained recognition. With no time to even think about having personal lives, Knight and Mills are putting their heads down and focusing on what they love. They’ve been fortunate enough to have close friends from home who work as part of their crew on tour, making them feel like they’ve got family with them along the way. But this hasn’t made producing new music any easier for the duo. “We really want to make sure for this next record that we don’t repeat ourselves, so I think that means us being comfortable being off the road and really sitting down and trying to experiment a lot,” Mills said.

Mills touts the benefits of frequently being on tour, saying that he and Knight are learning so much, meeting new artists and discovering new music. He said that collaborations with other artists have always been the biggest learning tool for both of them and it has helped expand and evolve their sound without losing their distinctiveness. Their most recent single, Light, is a collaboration featuring the vocals of Little Dragon’s Yukimi Nagano.

There’s something ineffable about Odesza’s music that has led to its mass appeal. It may be its occasionally wistful, nostalgic sentimentality that they’ve somehow harmonized with dance-ability or maybe it’s just the feel-good vibe.

“I think that part of it is that we’re able to sneak weirder sounds into more pop-sensibility-style music,” Mills said. “We find ways to incorporate the stranger more exotic stuff so there’s something unique about it, but it’s palatable enough for people to feel like it’s not too far out of their comfort range to listen to. We definitely go the motive route when we make music and we go for a motive over any kind of banger. I think for a lot of the album [Summer’s Gone] we wanted it to be kind of the background-of-people’s-lives kind of music that people sat there and had their own connection to depending on what experiences they’ve had.”