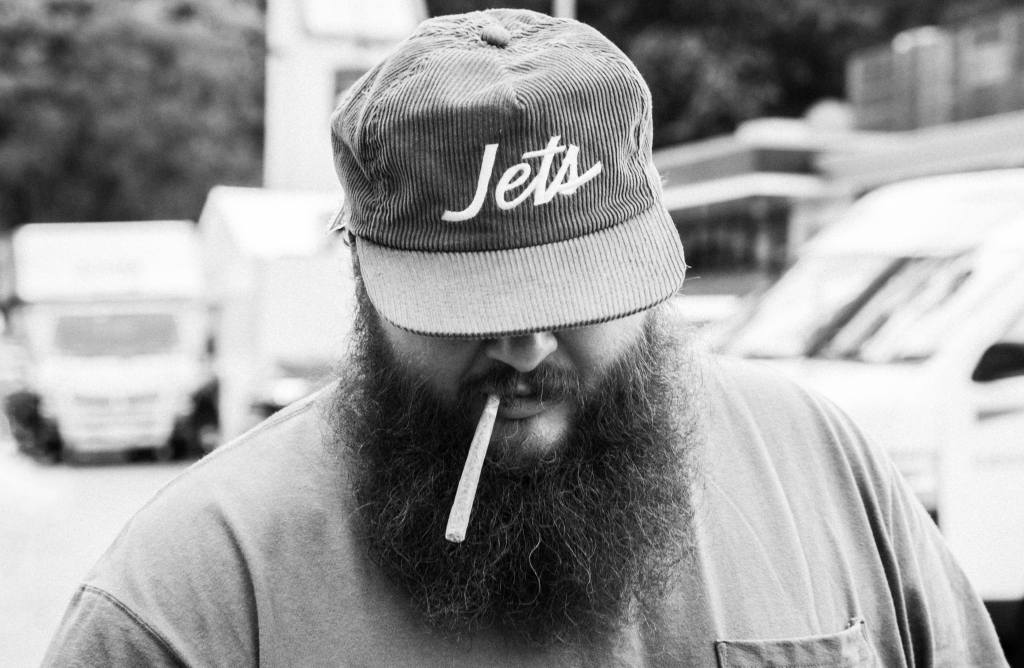 Massimo Battura, the world-renowned chef and inaugural subject of the Netflix series Chef’s Table, wrote a book with a title based on the old adage “never trust a skinny chef.” If that’s any advice to heed, Action Bronson is as trustworthy and credible as they come. And that authenticity goes deeper than mere physique when it comes to the epicurious rapper from Flushing, Queens. But despite his busy schedule hosting a slew of shows as the darling, stoner chef of VICELAND, Bronson has managed to maintain notoriety with his hip-hop career, having recently released his third studio album, Blue Chips 7000.

In order to make it these days, artists have to be multifaceted and innovative, keeping up with the latest trends and trying to break the mold. At the same time, they have to avoid pretense and resonate with their audience, or the internet trolls will tear them apart. Bronson has hit the nail on the head in this sense, with his zero-fucks-given charm and infallible New York attitude.

The opening track on his latest album begins with a dialogue between he and his mom, sitting in a car, smoking weed. In a recent interview with The Marquee, Bronson gave a little more insight into that interaction. “I was just fuckin’ stoned as fuck. I was high on 4/20 as a good family should be. I gave my mother some hash oil for the first time, not the smokeable, the digestible in the coconut oil. She lost her shit,” he said. But Bronson’s mother isn’t a lightweight by any stretch. “She’s been smoking for longer than us put together,” he added.

It’s surprising that Bronson isn’t a practicing Rasta with the amount of weed he smokes, as it’s uncommon to see him not stoned or without a blunt in his hand. He even has a show on VICELAND, in which he and his buddies get stoned and watch Ancient Aliens on History Channel. The show is literally called, Traveling the Stars: Action Bronson and Friends Watch ‘Ancient Aliens.’

But Bronson’s TV personality extends beyond the programming blatantly geared toward stoner culture; food is also his sacrament. His most popular series, Fuck, That’s Delicious, takes a no-frills approach to the upper echelon of the culinary world, while also showing appreciation for the food trucks and hole-in-the-wall joints, beloved by nearly every New Yorker. At face value, Bronson might just appear to be a man who appreciates good food with the engaging personality needed to win the internet, but he’s not just a food critic who got a show because of his hipster fame. He actually boasts a decade-long career as a chef from back in the day, having even worked as a chef for the New York Mets.

Luckily, Bronson’s rap career and celebrity from his VICELAND catalog seem to mesh well together with his TV persona seeming only to be a slightly subdued version of his hip-hop self. For anyone else, it might be difficult to balance these two distinct careers in the limelight, and Bronson has conceded that he has fans who don’t even know about his rapping, but he remains undeterred.

“I’m just me, you know, whatever comes at me, whatever I feel at the time, whichever way the wind blows. I like to express myself, period,” Bronson said. “So, I couldn’t imagine myself focusing on only one thing.”

On his latest release, the third and final installment of his Blue Chips mixtape series, Bronson’s style shows some subtle signs of change. In the past, Bronson’s lyrics have been known for their raunchiness and profanity, but on this latest iteration, it seems he’s toned the vulgarity back a bit, though he won’t totally admit it. “I don’t think that it’s tame at all. I dunno. I say ‘fuck’ a lot. I say ‘motherfucker’ plenty. I talk about my cock, you know. Nah, it’s good. I only mention my cock like once or twice, so that’s a good departure from my previous works.”

If anything, you can’t say he’s not self-aware, and he attributes this departure to, one word, “growth.”

And Mr. Bam Bam Baklava, as he’s also known, has likely grown due to his exposure to a number of different cultures over the course of his travels for VICE, as well as world tours with the likes of Eminem and Kendrick Lamar.

“Everything in life influences me, I like to see things and experience things,” Bronson said. “Driving through the fucking mountains of Auvergne in France; Venice, Italy being on the water; being in Sweden; being in Japan. You experience all these different lifestyles and cultures, you know, all at one time, really it’s a beautiful thing. But I’ve already been there, because I’m from Queens. It’s one of those things where I’ve already seen everybody in the world before I leave my borough.”

Unsurprisingly, Bronson is a huge fan of Colorado and, after a long hiatus, he’s eager to get back out here for his show at the Ogden Theatre this month. “I haven’t been in Denver for a minute,” Bronson said. “I missed the past couple of times at Red Rocks for fuckin’ ridiculous reasons. It’s about goddamn time I come back there for fuck’s sake. It’s one of my favorite places, all my boys out there with the hash and the fuckin’ glass. It’s my kind of place.”

Though he’s clearly had the pleasure of experiencing what Colorado has to offer in the way of weed, Bronson says he’s yet to truly experience the culinary scene that our state is becoming so well known for. But this time, he’s ready.