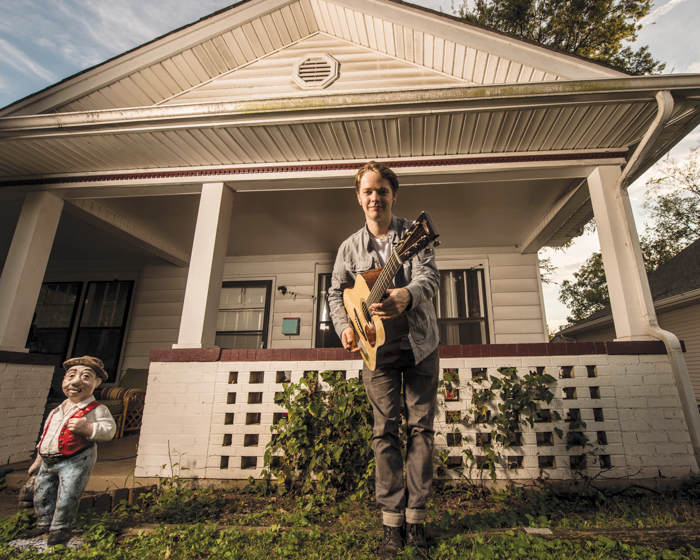 Leaving the nest; it’s a rite of passage. Two years ago the bluegrass world saw one of its best and brightest young stars break out from under the tutelage of his mentor and take flight on his own. In early 2016, William Apostol, who has been known as Billy Strings since his aunt bestowed the nickname on him as a child, parted ways with fellow Michigan native Don Julin to tackle the music world on his own.

“I would not be where I am now if it wasn’t for Don Julin that is for sure. He showed me how to make a living playing music,” said Strings during a recent interview, as he and his bandmates made their way from Atlanta to the Florida Keys for a mid-winter festival gig. “I never thought I could do this but when Don came along he was like ‘Nah, dude, you can quit that day job soon. Watch I’ll show you!’ I was like ‘Alright, I don’t know how to do this but you’ve been doing this longer than I’ve been alive, so show me the ropes.’ And he did. He was my mentor which, I think, almost got in the way sometimes because there was such a high respect and almost kinda fatherly thing there — I already have a dad, you know — I was younger and on some level, it felt like I couldn’t do what I really wanted to.”

Today Strings is on his own and breaking free of the molds of traditional bluegrass. “I’m free to do with my songs what I want,” he said. “When it’s a duo it’s fifty-fifty all the time and it can be harder to work out. With me and my band, we work on stuff together but if there are songs that I bring to the table, we are going to play them. I felt there were times with Don where we would disagree on silly stuff that would hold us back from creating original music. I’d like to play music with Don in the future, that’s for sure, but now I’m free to do my own thing and take my music in whatever direction I want.”

He may be only 25 years old, but Strings already talks about the road with the off-handed candor of a veteran that has been seasoned by years of crisscrossing the country playing one small club after another. After hundreds of dates playing as a duo with Julin, and longing for the comradery of a band, Strings has put together a group of virtuoso players that compliment his otherworldly flatpicking ability. “I’ve always dreamt of having a band where everyone gets along and everyone is friends because life on the road can be an adventure, or it can be hell. I could be out here stuck in the van with three people I don’t enjoy being around but that is the furthest thing from what I have going on in my life right now and that makes me so happy,” Strings said with youthful enthusiasm. “We play two hundred gigs a year and that’s hard. I don’t see my mother. I don’t go to weddings. I miss birthday parties. I don’t see my niece and nephew growing up. I’m gone. I’m on tour. That’s a big sacrifice but it’s all for the music and this is my dream. When I was a little kid I used to read Jimi Hendrix biographies and Kurt Cobain and Jim Morrison and Janis Joplin and I had a dream of being a musician who was out there doing it. Now I’m here and it’s really great but you can’t take anything for granted. You have to be good to the people around you because the road will push you and it will test you and test your patience and test your ability to live and have relationships with people that are close to you.”

It’s clear when he talks about them that Strings is incredibly proud of the band he has assembled. “On banjo, from Portland Oregon, is Billy Failing. He’s a hell of a banjo player. I met him in Nashville and he’s been with me at least two years now,” Strings said as he practically gushed about the guys he was sharing a van with. “On mandolin, we are very lucky and thrilled to have Jarrod Walker. He’s played bluegrass mandolin since he was a sprout. The dude was on stage with Earl Scruggs and Ricky Skaggs when he was around twelve years old. He’s one of the best mandolin players I’ve ever heard, period. And finally, on bass, we have Royal Masat. He’s the bluegrass Phil Lesh. He is so groovy and he just plays so many cool melodic notes. I freaking love these guys and I’ve got a band now where every member is a veteran at their instrument. Give us another couple of years. I can take this thing somewhere outside of anything I’ve ever experienced before. I’m honored.”

Strings’ live show goes a long way to prove that he’s already taking the project well beyond the bounds of traditional bluegrass as he leads the band through improvisational passages that owe as much to Jerry Garcia and The Grateful Dead as they do Flatt and Scruggs. “I’ve gone from being an uptight, traditional grasshole to being totally the opposite,” Strings admitted as he opened up about another Michigan bred bluegrass powerhouse who he has been sharing the stage with for at least five years now. “Greensky [Bluegrass] is hands down, my favorite band on the scene right now. I look up to those guys. They showed me how to do this. They are like my big brothers. They have taken me under their wing and I love them. I owe them a whole lot. They deserve some credit when you think of Billy Strings today.”

Strings went on to give an example of how Paul Hoffman, Dave Bruzza, and the rest of Greensky have influenced his approach to the genre. “Last night we covered an Infamous Stringdusters song that, except for like an hour before the gig, we’d never played before, ever,” he revealed. “We do things like that to keep it fresh for the audience. I don’t have any solo of any song worked out. It’s not written down. It doesn’t matter what song I’m playing, I will never play the solo the same way twice. It just doesn’t happen. I don’t have it worked out that way. It’s just like ‘okay this is my time to sing the melody with my guitar.’ Some of our songs have some structure but say the banjo player takes a break and it’s going really great, he might take it again. We have to be looking at him and listening to him to see if we have to start singing again if he’s done or keep playing if he wants to take it around again. A lot of our stuff is improvised at this point.”

For now, it sounds like things are falling into place for Strings as his schedule fills up with bigger and bigger shows and his music is being devoured by bluegrass hungry fans across the country. “It may say Billy Strings on the marquee or whatever but these guys are my brothers. We are going to take this thing to the stratosphere if we can. I’m free to take the music wherever I want now.”