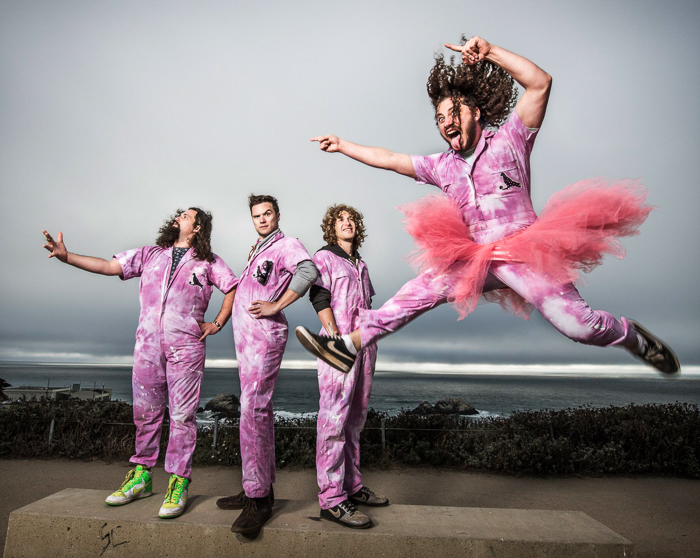 For those who took Psychology 101 in college, the concept of Pigeons Playing Ping Pong might bring to mind B.F. Skinner — the 20th-century psychologist who worked to prove that behavior was caused only by external factors, not by thoughts or emotions. But for today’s jamband fans, Pigeons Playing Ping Pong doesn’t conjure images of lecture halls. Instead, it invokes images of concert halls filled with raucous dancers electrified by pulsing funk beats, infectious grooves, and a wild-eyed frontman that is as likely to be wearing a bright pink tutu as he is standard jamband issue t-shirt and jeans.

Hailing from Baltimore, Md., Pigeons Playing Ping Pong have exploded onto the scene over the past several years as they have quickly climbed their way from dive bars, to major clubs, to national festivals, welcoming new fans into their “flock” at every turn. “If you haven’t seen us play before and don’t know our music, it’s a psychedelic explosion of funk and energy,” said lead singer Greg Ormont, talking recently with The Marquee as he wrapped up a sushi lunch with his fiancé and prepared to hit the road for the band’s winter tour. “I liken it to winding up a jack-in-the-box and just letting it rip because everything explodes like a can of worms while still maintaining tight funky grooves. The four of us really listen to each other while we play so it’s true improv and true jamming and each song can truly go in any direction but it’s always going to be doused in fun energy. I’d go on to say that we might smile more than any other band out there and as a result our audience reflects that smile back at us and we push it through the clouds in a funky fusion of excitement.”

The enthusiasm in Ormont’s voice is as contagious as his stage presence as he reflects about the artists that have influenced the band’s vibrant personality. “A young Red Hot Chili Peppers; raw energy, explosive, crazy eyes and big smiles, and just oodles of energy. Depending on what we are doing, we can also get weird like David Byrne but more so raw natural energy like the Peppers,” he said. “Anthony Keidis is such an amazing performer and has such style with his hooks. He’s been a big influence for a long time — especially his live energy. Maybe not his personal life, no disrespect to Anthony, but I’ve read Scar Tissue, his book, and I’m not trying to go that far down the rabbit hole but I do dig his energy and his passion for playing.”

After forming in 2009, Pigeons built a strong mid-Atlantic fan base over their first five years on the scene, and were on their way to national recognition when original drummer Dan Schwartz decided to part ways with the band to focus on other passions. Fortunately, he gave his bandmates plenty of notice and the guys were able to reunite with a drummer who had caught their attention years before. “The drums really dictate the band’s voice in a lot of ways, especially since we are so dance and groove oriented. Our current drummer, Alex [Petropulos], who we call ‘Gator,’ is a phenomenal musician who we played with years ago when we opened for his band and we always remembered how talented he was,” recalled Ormont. “So, when Dan told us it was time for him to shift focus and move on, we called Alex and he came prepared with pages and pages of notes on our songs and within ten seconds that tightness, drive, and confidence was palpable and we knew right away that he was our guy. The past three years now have been incredible.”

According to Ormont, Petropulos eased into his role behind the kit smoothly as he gradually built trust and a strong working knowledge of the material before he really let loose. “I think Alex did a great job in the first year of joining the band because he kinda mimicked what we had always done and then, in the second year, he started to add some more flair of what he’s like and now, in his third year, he’s making the decisions that he wants to make regardless of what we used to do and we are starting to see a lot more bold choices coming from the drum kit. We love them, and it catches us off guard in a very positive way and it keeps us on our toes as we run with his dynamic as opposed to him running with our dynamic,” Ormont explained. “The comfort level has taken a few years as it naturally does and now I think Alex is flowing and letting his ideas roll out of him whenever they come without hesitation now. We always encourage him to continue to bring his ideas to the table because that’s what a band is. It’s not one or two of our minds, it’s all of our minds and that’s what makes it interesting.”

This new band dynamic is featured prominently on the quartet’s most recent release Pizazz. The boldly titled album is a wild collection of tracks that show off the group’s penchant for creating high energy party funk.

“It’s a very powerful album,” Ormont said. “Just from the drum and bass side of things it’s very rhythmic with lots of tight grooves and it’s a testament to Alex in the studio because normally it takes a few takes on these songs to get the drums perfect but it took Alex one or two takes per song to be done. Our engineer in the studio has recorded a lot of great bands — he’s been doing this for a couple of decades and has a few gold records — and he said ‘Hold on to this guy.’ He’s got skills for days.’”